Woman who spent £60,000 on eerily lifelike dolls after being told she would never have children reveals her delight at welcoming a son – and says her son has 40 ‘brothers and sisters’ (including a TWIN)

A woman who spent £60,000 on eerily lifelike dolls after being told she would never have children revealed her delight at becoming a mother for the first time.

Victoria Andrews, 26, of Newbury, Buckinghamshire, began collecting the toys, known as ‘reborns’, as a teenager after a polycystic ovary syndrome (PCOS) diagnosis left her believing she would never have children of her own.

The single mother, who lives with her parents, was shocked to discover she was pregnant last year and welcomed son Tobias, affectionately known as Toby, in May.

She joked her son already has 40 brothers and sisters – and that she’s a mother of 41.

Among them is Toby’s ‘twin’ that Miss Andrews had made to look exactly like her son as a newborn. The toy weighs the same amount that Toby did at birth and is even dressed in the same outfit that Toby wore home from hospital. 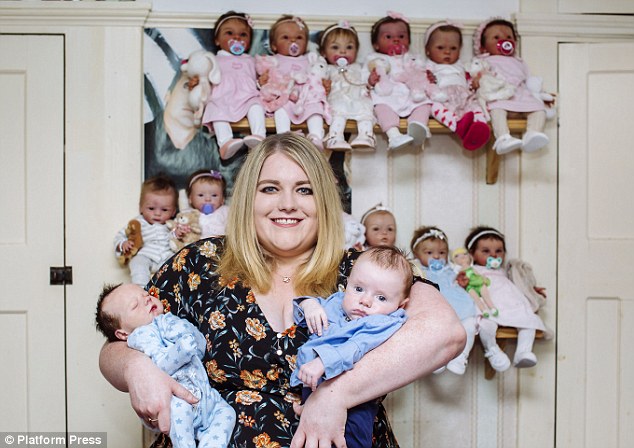 ‘Mother of 41’: Victoria Andrews, of Newbury, Buckinghamshire, began collecting lifelike dolls, known as ‘reborns’, as a teenager and at one point had more than 100 in her collection (some pictured). She welcomed her son Toby, right, in May and jokes she now has ’41 children’ 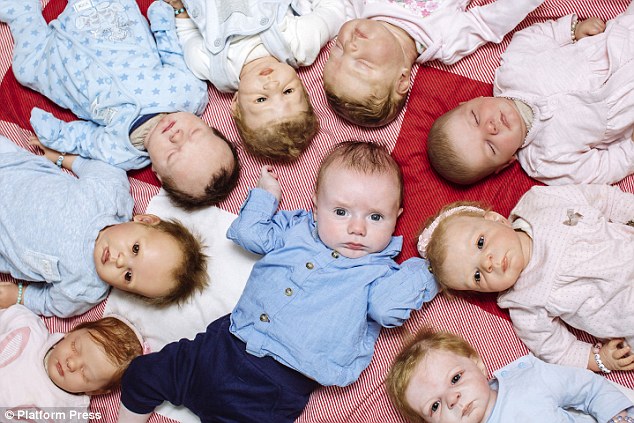 ‘Brothers and sisters’: Three-month-old Toby surrounded by some of the 40 dolls in his mother’s collection. Miss Andrews, 16, started collecting the dolls after being diagnosed with PCOS aged 16. She believed the condition would leave her unable to have children 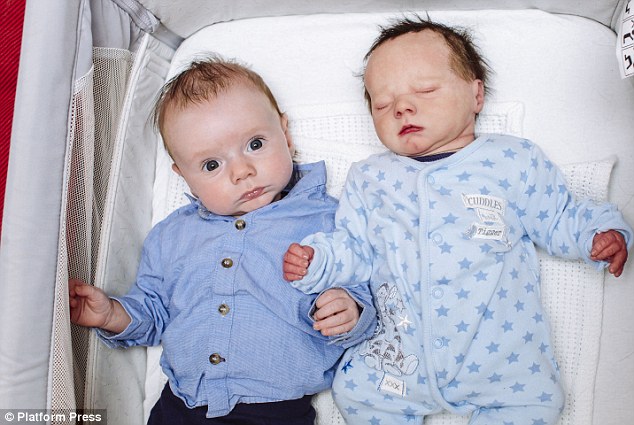 Happy surprise: Barmaid Miss Andrews was shocked to discover she was pregnant with Toby, left. To mark the occasion of his birth, she had a lifelike ‘twin’ made of her son, right

She said: ‘The likeness is incredible. [My friend] even made the doll – who I’ve called also called Tobias – to weigh exactly 7lb2oz, same as the real Toby did when he was born. Toby loves staring at him.’

The common condition affects the ovaries and can cause irregular periods, making it more difficult to fall pregnant.

But she was forced to sell off 40 of her dolls ahead of Toby’s arrival, raising roughly £10,000 to pay for the newborn’s essentials. 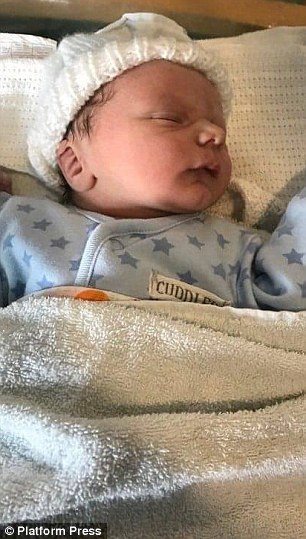 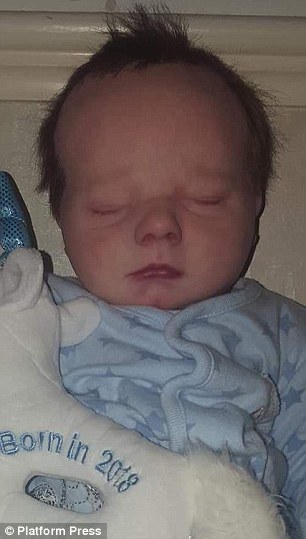 Lookalikes: Newborn Toby Andrews in May, left, and his ‘twin’ reborn doll, right. Miss Andrews even dressed the reborn in the same babygrow that Toby wore home from the hospital Who’s who? Toby, right, sleeps next to his reborrn ‘twin’ at home in Buckinghamshire. Miss Andrews told how her son loves gazing at the doll

Last year Miss Andrews started taking a drug designed to halt the facial hair growth that is a common symptom of PCOS. But she believes the medication also prompted a spike in her fertility.

‘I’d tried so many different things in the past that hadn’t worked it didn’t really occur to me that this one might. I wasn’t even taking it for my fertility,’ she said.

‘Me and my partner at the time didn’t use protection – there was no need.’

Miss Andrews only learned she was pregnant after going to the doctor after weeks of what she thought was a stomach ulcer or gastroenteritis.

Growing family: Toby, centre, with some of Miss Andrews’ reborn collection. She sold 40 dolls for some £10,000 ahead of her son’s arrival in order to afford essentials for her baby 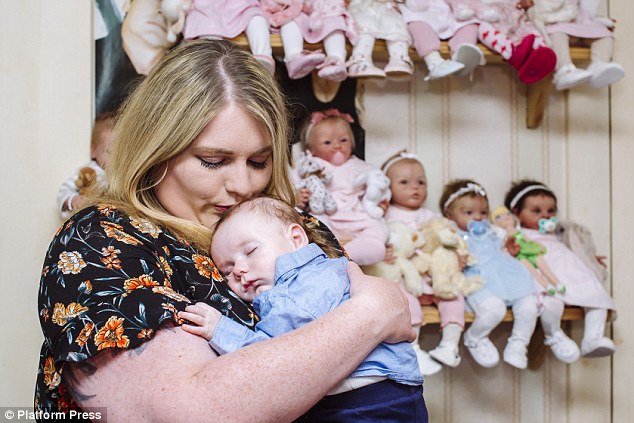 Precious: Miss Andrews said she was ‘smitten’ with Toby the moment she saw him and hasn’t held a doll since his birth. Pictured, mother and son with some of the dolls behind

She said: ‘My blood tests came back. The doctor talked to me for a few minutes and then said “congratulations by the way, you’re at least seven weeks pregnant”.’

Miss Andrews was so shocked she even paid for a private scan to confirm the news.

She added: ‘It was only when I saw his tiny body that I started to celebrate. I was so happy.’

Miss Andrews admitted Toby’s arrival means she’s had less time to spend on her dolls, saying she hasn’t even picked one up in the months since. 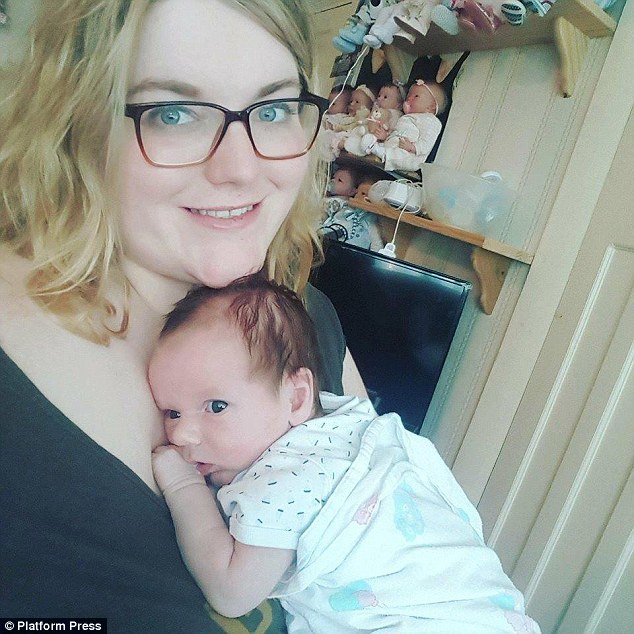 She continued: ‘Some of the ladies in the doll community take their collections quite seriously. They with feed and bathe their dolls and put them into pyjamas at night.

‘I mostly keep mine on a shelf. Sometimes, before I had Toby, I would pick them up for a cuddle if I was feeling down. It’s really soothing.

‘But now I’ve got him I don’t need to do that. I don’t have time. I haven’t even picked one up since Toby came along.’

She added: ‘I still love them. Not in the way I love Toby, of course. I’d love to have more kids one day. Maybe four. For now I joke that I’ve got 41.’