A female landscaper was outraged after being told she wasn’t ‘strong enough’ for a job, despite having years of experience in the field.

Charlotte received an email from the potential employer explaining that while the position is still available, they don’t believe she’ll be able to physically handle the workload.

Shocked by the response, Charlotte hit back in a hilarious response by outlining her capabilities, and exposed the email exchange on Twitter. 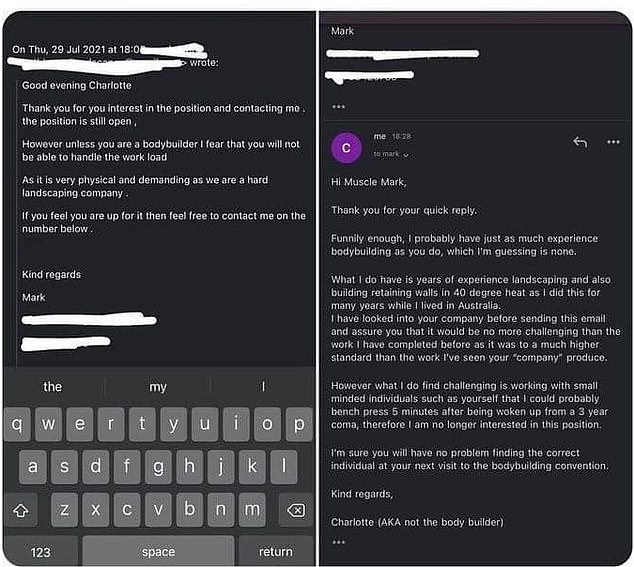 Aussie female landscaper Charlotte received an email from the potential employer explaining that while the position is still available, they don’t believe she will be ‘strong’ enough to ‘handle the workload’ (pictured, the email she received and her response)

Charlotte received the email from Mark who explained the position is still open but questioned her strength.

‘Unless you are a bodybuilder, I feel that you will not be able to handle the workload as it is very physical and demanding [and] we are a hard landscaping company,’ he wrote.

‘If you feel you are up for it and feel free to contact me on the number below.’

Charlotte began her response by calling him ‘muscle Mark’ then wrote: ‘Funnily enough I probably have as much experience bodybuilding as you do, which I’m guessing is none.

‘What I do have is years of experience landscaping and also building retaining walls in 40-degree heat, as I did this for many years while I lived in Australia.’

Charlotte said she’d find it far more challenging working with ‘small minded individuals’ rather than the workload itself.

‘I have looked into your company before sending this email and assure you that it would be no more challenging than the work I have completed before, as it was to a much higher standard than the work I’ve seen your ‘company’ produce,’ she said.

‘However, what I do find challenging is working with small minded individuals such as yourself that I could probably bench press five minutes after being woken up from a three a coma, therefore I’m no longer interested in the position.

‘I’m sure you have no problem finding the correct individual at your next visit to the bodybuilding.’

She also used the hilarious sign off, ‘Kind regards, Charlotte (a.k.a. not the bodybuilder)’ to conclude the email. 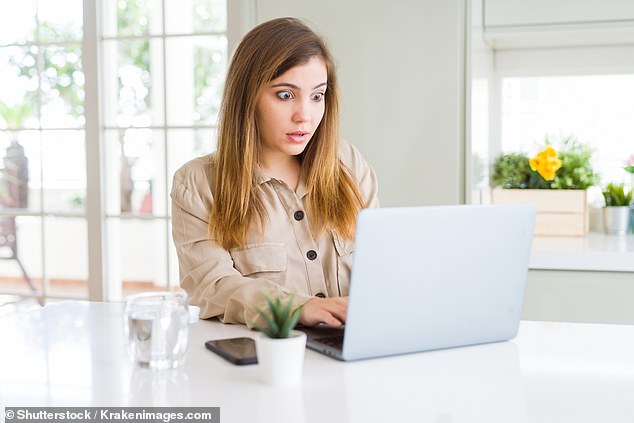 The Tweet was shared on social media and many deemed the post to be hilarious, but some considered Charlotte to be ‘too sensitive’.

Do you think Charlotte was being ‘too sensitive’?

Do you think Charlotte was being ‘too sensitive’?

‘I’ve had similar before. Men wanting me to “prove” I’m capable of doing my job just because I’m female, yet the 16-year-old boy fresh out of school just gets handed the same position without having to prove anything,’ one woman wrote.

Another said: ‘I think her response was a bit over the top, he’s a landscaper not a therapist and probably could have used more polite words getting the point across.

‘But man how sensitive we’ve gotten, she could have just showed them how capable she is and that’s that.’

A third asked: ‘Those of you saying she should’ve responded more professionally, I have one question for you: why? Why should she respond professionally to an employer that’s not professional for a job she no longer wants?’