Woman, 29, suffers a stroke at work just five weeks before her wedding because she was ‘taking the contraceptive pill while overweight’

A bride-to-be has revealed how she suffered a stroke at work just five weeks before her wedding, with doctors saying it was due to taking the contraceptive pill while overweight.

Carina Trickey, then-29, from Harlow, Essex, suffered a stroke while sitting at her desk in March 27 2012.

At her heaviest, she weighed 18 stone, with doctors saying her weight, alongside 10 years of taking the contraceptive pill, had created ‘the perfect storm’ for the blood clot.

Despite suffering the stroke, Carina was able to fully recover from her ordeal and marry her husband five weeks later, revealing: ‘The vows definitely meant a bit more with ‘in sickness and in health’ because we had already passed that test.’ 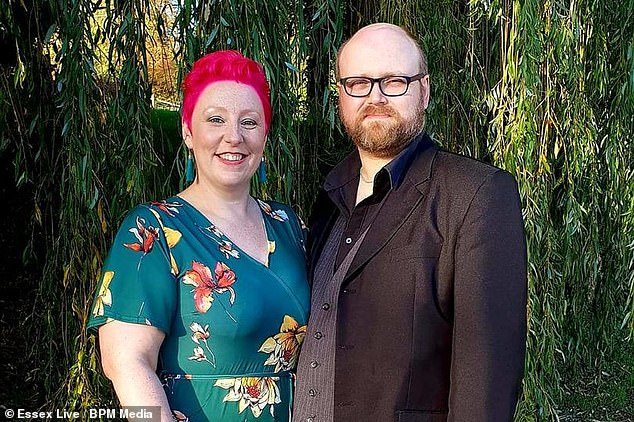 Carina Trickey, then 29,from Essex, was due to marry her husband Steve (pictured) in just five weeks time when she suffered a stroke at work

Then 29-year-old from Harlow, Essex was sat in her office at work when she picked up the phone to answer a call, but when she went to talk, only a complete jumble of words and letters spilled out of her mouth.

She tried again to say hello, but more strange noises tumbled out. She had no idea what was happening.

As she turned around to her colleagues, Carina’s arm fell off the table onto her lap. She knew something was wrong.

That day in March feels completely surreal to Carina now, like the scene from a movie, explaining: ‘I had been getting on with my work in the office, gone to the loo, came back and the first time that I knew anything was wrong was when my phone rang.

‘I used to say my name and ask how I could help, but when I picked it up, a load of gobbledygook came out.

‘It was just mixed-up words. I could hear it all coming out of my voice but it was like a foreign language.

‘I tried again but my words didn’t register. My brain was working and telling me to speak, but it wasn’t coming out right.

‘I turned around and was just going to say “Can someone take this call?” because I just felt a bit faint. But of course, those words didn’t come out.’

It didn’t matter too much that Carina couldn’t ask her colleagues to take over because they were already looking at her in disbelief after hearing the call.

‘It’s laughable now really, you couldn’t write it down,’ she continued. 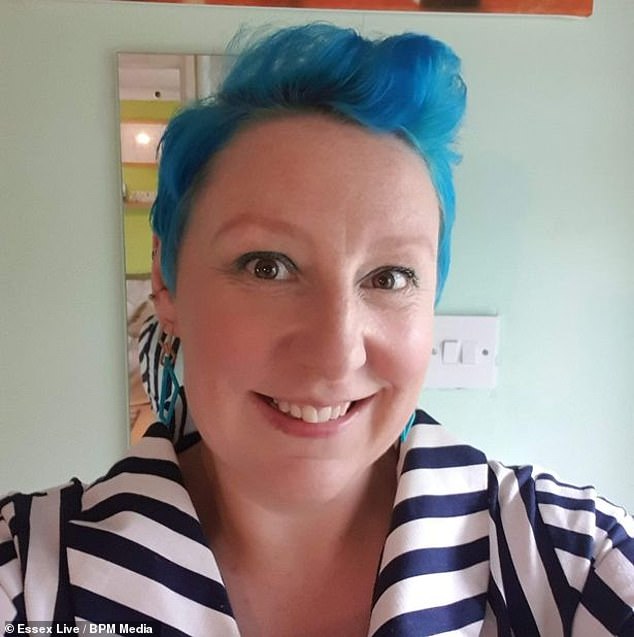 Thankfully, the wedding could still go ahead, but over the next eight years, Carina has learned to adapt to a ‘new body’ while navigating the mental and cognitive effects of the stroke

‘As I turned around I realised my left hand had gone weak. Everything went through my mind, my colleagues just said put your head between my knees because I thought I was going to faint.

‘Afterwards they told me they could see my face had dropped on one side too. But no one was looking for the signs of a stroke, no one thought it was that at my age.

‘It happened so quickly. At the time you are trying to gather your thoughts and it’s like watching it in slow motion, you’re just thinking what is happening?

‘You almost feel detached because everyone around you is panicking and you are just watching it happen – especially when you can’t speak.’

Carina was ready to walk herself over to the walk-in clinic, but thankfully one of her colleagues drove her to A&E and called her husband.

CAN THE CONTRACEPTIVE PILL CAUSE A STROKE?

The NHS lists stroke as a potential side effect of taking the contraceptive pill but says the risk is ‘very small’.

Doctors intending to prescribe the Pill are expected to carry out tests and decide whether a woman is likely to develop blood clots or have a stroke if they start taking it.

Researchers from Loyola University in Chicago last year published a study confirming the link between the two but saying only the risk of a stroke caused by the brain’s blood supply being blocked by a clot.

Blood clots may be more likely in women taking the pill because oestrogen – a main ingredient of contraceptives – boosts the number of clotting substances in the patient’s blood.

This raises the risk of a clot forming anywhere in the body and, if it becomes dislodged and travels to the brain, it can cause a stroke.

She added: ‘When I get into A&E, they were obviously more aware of what to look out for and after five minutes they did tests and said it was a stroke.

‘They said, “I can’t believe you self-presented” saying I think I’ve have had funny turn.’

The paralysis and other symptoms slowly cleared after a few hours and Carina was sent home to recover.

Carina was called back into hospital for tests four days later – the day she was due to be trying on her wedding dress.

Even then, she started to notice the stigma around strokes and the assumption that it only happens to the older generation.

The hospital confirmed that Carina had a full stroke, but didn’t seem to have any of the physical side-effects often caused by a stroke.

‘With the diagnoses, there’s almost part relief that you know what it is and you can do something about it,’ she said.

‘The next thought you have is you do blame yourself for what’s happened, my body let me down.

‘It’s very scary but you have to get on with it. The most I worried about it was that it would happen again, especially the few days afterwards.’

Although the doctors never exactly pinpointed why she had a stroke, they said it had been a combination of factors.

She explained: ‘She said it was like the perfect storm that the blood clot went past just at that time.’

‘I was 29 and I had been on the pill for going on ten years. I had never had problems before and always had my check ups.

‘Some people aren’t aware that being on the pill is a risk factor of stroke..’

Carina remembers her last check up being on January 6, explaining: ‘She was the first person not happy with my weight and being on the pill.

‘I said, “I have run out it so what do I do” and so she compromised and said, “I will give you three months but you have to lose weight”.’

Her then-boss asked her to come back to work just six days after suffering her stroke.

She said: ‘As much as you want to get back to normal, you have a new body.

‘Obviously some people have to relearn to walk or talk and I was lucky I didn’t have that, I felt okay. 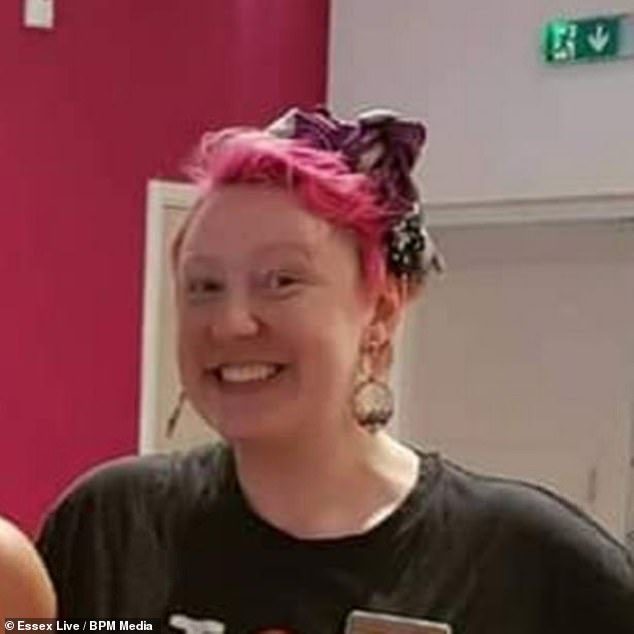 After the stroke Carina was ready to walk herself over to the walk-in clinic, but thankfully one of her colleagues drove her to A&E and called her husband

‘Even my business had me back at work the week after. I did my first day and by lunchtime, I was like “yeah I will go home now”.

‘I said at the time if one of the men had a heart attack, God forbid, would you expect them to come back within six days?

‘He said “Of course not”. To them, it was like why would I even ask that? But yet it’s not the same with a stroke because I looked okay.’

She continued: ‘It’s really hard because you don’t want to play the ‘”stroke card”. You don’t want to be like that because that’s almost giving into it. You want to push yourself, but you do feel a lack of understanding from some people.’

Carina was delighted that her and her partner Steve were still able to get married on May 5.

They did have the discussion of whether to cancel, but Carina knew she wanted it to still go ahead.

She even did the hen party, even if she was knackered afterwards, explaining: ‘It was a lovely day.

‘At the reception, there were a lot of people asking. Some people hadn’t seen me since the stroke and expected me to look like the old people on the adverts.

WHAT IS A STROKE?

There are two kinds of stroke:

An ischemic stroke – which accounts for 80 percent of strokes – occurs when there is a blockage in a blood vessel that prevents blood from reaching part of the brain.

The more rare, a hemorrhagic stroke, occurs when a blood vessel bursts, flooding part of the brain with too much blood while depriving other areas of adequate blood supply.

It can be the result of an AVM, or arteriovenous malformation (an abnormal cluster of blood vessels), in the brain.

Thirty percent of subarachnoid hemorrhage sufferers die before reaching the hospital. A further 25 percent die within 24 hours. And 40 percent of survivors die within a week.

Age, high blood pressure, smoking, obesity, sedentary lifestyle, diabetes, atrial fibrillation, family history, and history of a previous stroke or TIA are all risk factors for having a stroke.

SYMPTOMS OF A STROKE

Of the roughly three out of four people who survive a stroke, many will have life-long disabilities.

Both are potentially fatal, and patients require surgery or a drug called tPA (tissue plasminogen activator) within three hours to save them.

‘But I had been defiant, that’s another key feeling. I was determined and it was a nice way to start my new life with a positive.’

Over the years, Carina realised that the mental and cognitive effects of the stroke would take some time to get used to and understand.

‘Mentally I wasn’t as prepared as I thought I would be,’ she continued. ‘I didn’t realise how much my cognitive self would change and need looking after.

‘Your body does have to rewire a bit. You feel very tired and fatigued. It is essentially a heart attack in the brain. It’s something you can’t see, which is why people get so surprised about young people.

‘It’s one of those things that does get easier with time.

‘A few years ago, I had episodes of depression and that started to come more as I realised just how much my body had changed and how much my every day living changed.

‘I do have to think about what I’m going to do in a day, like if I go for a nice walk today I know I won’t do as much when I’m home.

‘The depression often comes in when your choice has been taken away from you. Everyone else gets the choice and you almost feel resentment.’

And while she has faced changes and challenges since having the stroke, she said her life has completely changed, revealing:  ‘I have a completely different career now and I do wonder if it hadn’t happened, what would my life have been like?

‘My life is completely different now. It’s weird to say, but maybe it was meant to happen.

‘It was a wake up call to ask what are you doing in your life?’