Soft plastic items meant for recycling are being stockpiled in warehouses instead. So what should you do with yours?

Soft plastics such as ice-cream wrappers, pasta packets and plastic bags will now need to be thrown in your rubbish bin. Australia’s largest plastic bag recycling program is unable to process them.

This masthead has reported that Australia’s biggest plastic bag recycling program, REDcycle, has collapsed amid revelations that hundreds of millions of bags and other soft plastic items dropped off by customers at Coles and Woolworths supermarkets are being secretly stockpiled in warehouses. 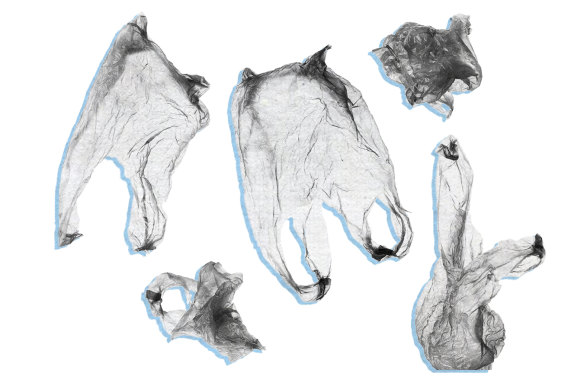 Federal Environment Minister Tanya Plibersek has said she expects the supermarkets to “step up” and indicate how they will deal with the recycling.

Australia uses about 70 billion pieces of soft “scrunchable” plastics, including food wrappers, each year. These can take decades, if not centuries, to decompose. So, what now for these soft plastics? And where should you be putting yours?

What is soft plastic?

What should you do with yours?

Supermarket giants Woolworths and Coles have each begun to respond to the suspension of the recycling program. Woolworths has directed stores to remove collection bins and put up signs informing customers of the suspension.

Coles will put up signs too, with bins staying for now, a spokeswoman says, “but any soft plastics placed in them will be disposed of until further notice”. Coles will work with government, industry and its sustainability partners to find a long-term solution to support soft-plastic recycling, she says.

REDcycle has now advised consumers to put soft plastics in their home rubbish bins until the issue is resolved, a statement on the organisation’s website said on Wednesday. The company has suggested that people cut back on unnecessary plastic and store soft plastic at home if possible.

Australian Council of Recycling chief executive officer Suzanne Toumbourou says it is vital that people do not put soft plastics in their recycling bins, as they can damage the machinery at recycling facilities.

What can you use instead?

It’s a bit tricky to avoid soft plastics, given how much we use. But if we can try to avoid them, we should, says the chair of Clean Up Australia Pip Kiernan. “We can’t consider recycling a magic bullet solution. It’s really important that we get in the habit of refusing, reducing and reusing before we consider recycling,” she says. “We have to think carefully about our purchases and the volume of plastic waste that we’re producing. As consumers, we can exert a lot of influence by our purchasing decisions.”

Practical solutions include reusable shopping bags, buying in bulk where possible and avoiding pre-packed or pre-weighed fruits and veggies.

“We’ve all been horrified by the sight of cling-wrapped bananas,” Kiernan says, “but we also need to consider whether we need to buy a pre-packaged salad in a plastic bag. Instead, can we choose salad ingredients from the loose section and put them straight in the fruit basket or fridge when we get home?”

Plibersek says everyone has a role to come up with viable solutions to allow Australians to continue recycling. “Like many Australians, I feel bad when I am forced to put soft plastics in landfill and I do my bit to take them down to my local supermarket to be recycled,” she says.

Jeff Angel, the director of sustainability organisations at the Boomerang Alliance and Total Environment Centre, says consumers should continue taking their soft plastics to the major supermarkets to place pressure on them and other producers to introduce a soft plastic stewardship scheme. Increased consumer pressure could see state and federal governments set targets and bring in regulations that would allow for a mandatory collection system of soft plastics, trials of which are already being run in Australia.

Already there’s a significant investment from governments to address the issue as well. The federal government has set aside $60 million to increase soft plastic recycling. And state and commonwealth environment ministers agreed in October to work with the private sector to phase out waste and pollution such as soft plastic ice-cream wrappers and pasta bags by 2030.

How does Australia compare in its plastic use?

Each year, every person in Australia (on average) uses 45 plastic produce bags, 50 plastic straws, about 70 plastic cups for hot liquid and 35 for cold, according to a 2021 report commissioned by the Australian government. These single-use plastics make up about a third of the litter on the street. On November 1, NSW banned a number of single-use plastic items, following Western Australia and South Australia. Victoria will do the same in February.

Most Viewed in Environment