Will Loving Bear Puffy — the man-sized teddy being sold to lonely hearts as a boyfriend substitute — make my single life bearable? He won’t snore, hog the duvet or talk back, writes IRAM RAMZAN

Early morning and I have woken up in the beautiful city of Varna in Bulgaria. I could have done with a few more hours in bed, but I must admit I slept rather comfortably.

My companion didn’t once complain — not even as I sprawled across his broad chest or insisted his arms remained around me all night. He didn’t hog the duvet or snore either. In fact, he was totally bearable . . . because he is a bear.

Yes, that’s right. I’ve just spent the night in a hotel with a rather extraordinary teddy.

‘Loving Bear Puffy’, to give him his full name, is a 5ft 7in milky-brown ’emotional support bear’ that lonely singletons can buy for £135 if they’re in need of a cuddle.

He has the ‘shape and size of a male human body’, his creators claim, ‘with the head of a half-asleep bear’. This gives him rather strange proportions — the broad shoulders of a weight-lifter and a soft toy’s tiny head. 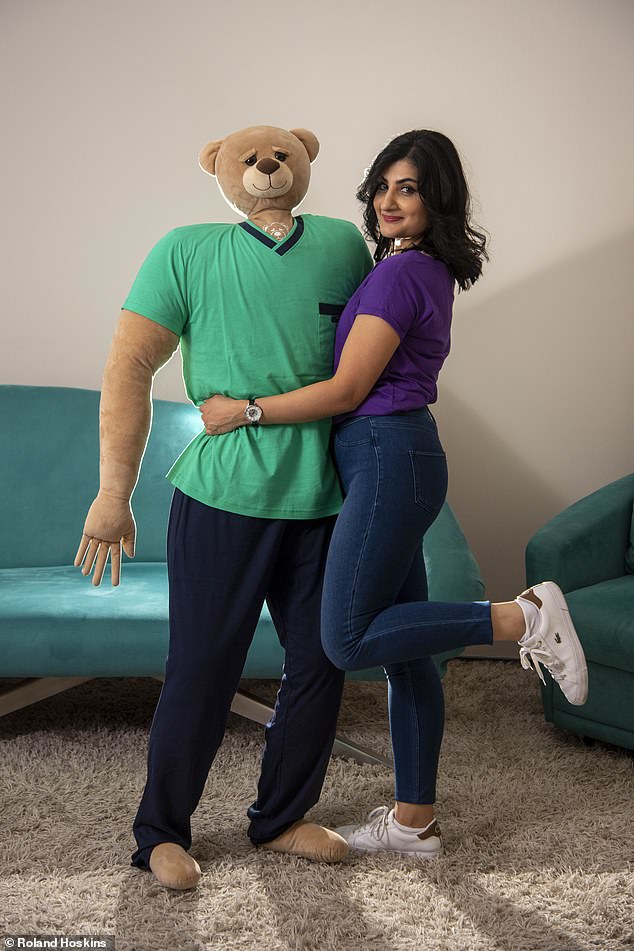 Creature comfort: In her hotel room in Varna, Bulgaria, Iram gets to know Puffy — could he be the answer to a lonely single woman’s prayers? 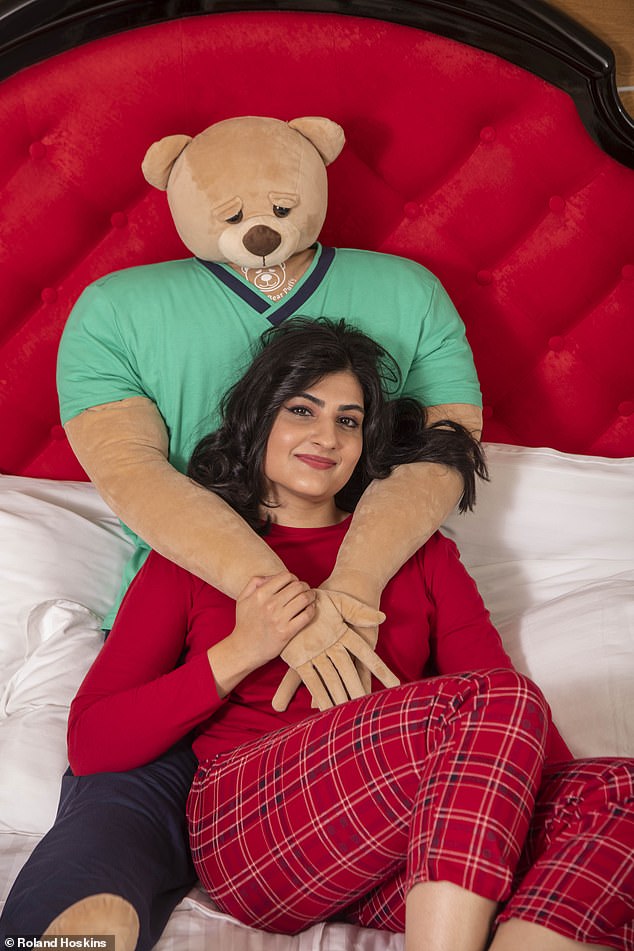 Puffy is stuffed with high-quality polyurethane foam filling (not exactly boyfriend material, but it makes him extra soft), and weighs just 3.2kg.

You can lean on him if you need a shoulder to cry on, or clasp your fingers around his hand for reassurance. You can snuggle down beside him on the sofa with a book or to watch a film, or he can share your bed. As the website states, he ‘replaces the lack of a person’s physical presence, especially during long, lonely nights’.

Why am I in Bulgaria? Well, this is where the company that makes Puffy is based. After reports of the man-sized comfort bears hit British newspapers this week, I couldn’t wait to try one out. But shipping to the UK takes roughly ten days, so here I am in Varna, sitting up in my hotel bed with Puffy.

The guys behind Loving Bear Puffy could be on to a winner here. The number of women not living with a partner or who have never married is rising rapidly in every age group under 70.

For many 30-something women like me, online dating has grown exhausting. We’re tired of Tinder and bored of Bumble. These apps become all-consuming — constantly swiping left or right on match after match, before things fizzle out or they ghost you.

And not only are more people staying single, they’re staying at home, too. Nearly a third of 20 to 34-year-olds live with their parents, according to the Office for National Statistics.

If there’s one way to ensure you’ve fully killed off your love life, it’s living with Mum and Dad.

The best thing about this bear, I soon realise, is that he’s always there when I need a snuggle. I don’t need to waste time getting to know him for days or weeks, before things don’t work out.

And while some might think it’s a bit odd to spend the night with a bear, a 2019 survey found that as many as 34 per cent of adults still sleep with a soft toy. So essentially, we have become a generation of adult babies: millennials, still living at home, sleeping with their teddies. No wonder the birth rate is plummeting. 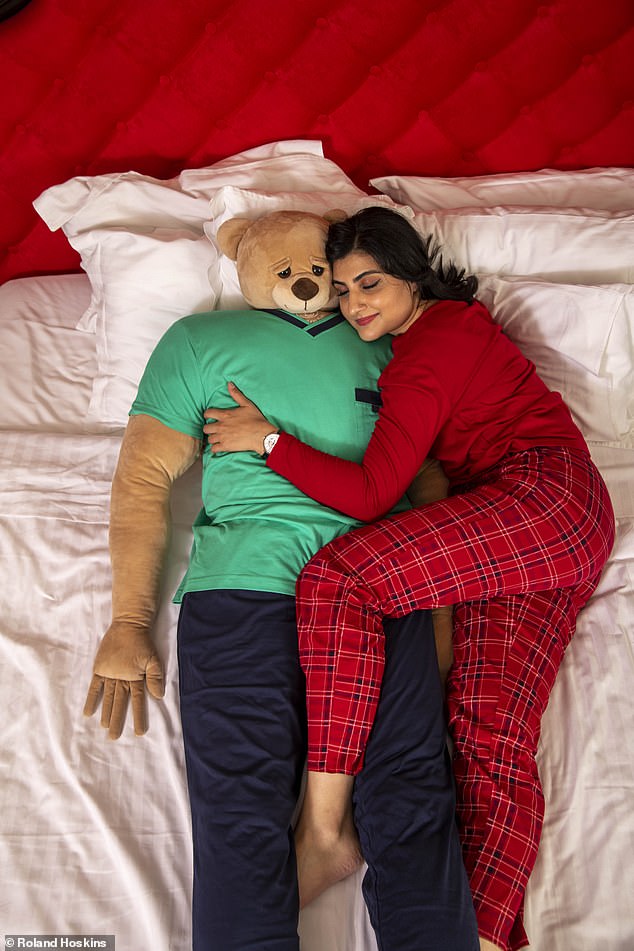 Puffy is stuffed with high-quality polyurethane foam filling (not exactly boyfriend material, but it makes him extra soft), and weighs just 3.2kg. 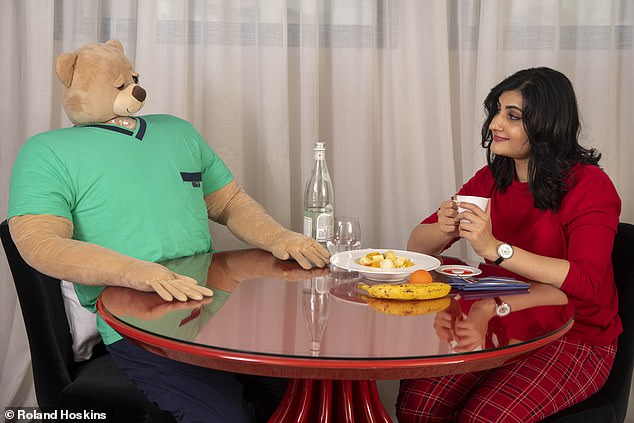 For many 30-something women like me, online dating has grown exhausting. We’re tired of Tinder and bored of Bumble

Puffy is the brainchild of Bulgarian businesswoman Tonia Berdankova, 47, and her 22-year-old daughter, Ina Marholeva. They developed the idea last year, after Tonia was trying to figure out how to manage a lonely summer without her husband Peter, 48, who was working out of town.

‘My daughter joked: ‘Who will you hug? You’ll have to invent a replacement’,’ Tonia tells me. ‘Then that idea got stuck in my head, I was thinking about it and how there are many women in the world alone for some reason and they need some kind of physical presence.’

And so Puffy the Loving Bear was born — with production starting just a few months ago. Tonia says demand has been growing, with sales highest in the Scandinavian countries, the U.S. and, inevitably, the UK.

But what I want to know is: how does Tonia’s husband feel about being replaced by Puffy? Is he threatened by the presence of another male, albeit in stuffed bear form?

‘He knows I like to hug something at night. We have one bear and it’s something we all use. When my daughter comes to stay, we’ll fight over it.’

And will there be a female version of Puffy for men to cuddle?

‘Maybe later,’ Tonia says. ‘But I think women are more likely to admit we need something like this.’

I ask my friends if they would like a Puffy. One says: ‘I’d get it for my boyfriend so I can sleep in peace!’

But another tells me: ‘If it’s not going to have a conversation, soothe my aching heart or give me a wild love-making session, I’d rather sleep alone. And I think hugging something called an ’emotional bear’ would make me feel even more alone.’

That, perhaps, is the saddest thing about this bear — it’s a reminder of what you don’t have in your life. A real partner on whom you can lean and rely upon for genuine support.

But in the meantime, bears like Puffy can be some consolation for us single ladies. And just remember, he’s perfectly house-trained!