The reason Novak Djokovic’s visa was rejected and he has been asked to leave Australia appears to boil down to one fact.

The Australian Border Force does not accept that previously contracting COVID-19 – even in the past six months – qualifies as a valid exemption to not be vaccinated. 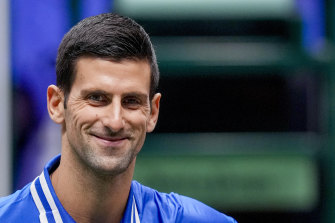 World men’s No.1 Novak Djokovic’s visa has been rejected.Credit:AP

While two medical panels that reviewed Djokovic’s application – one created by Tennis Australia and the other by the Victorian Health Department – may have come to the opposite conclusion, this is not the view of federal authorities.

A quick search of Commonwealth websites confirms this point. On a Services Australia webpage, there is a list of conditions that are “not valid reasons for an immunisation medical exemption”, and “previous infection with the same pathogen” is on this list.

Quite apart from whether there is a valid health reason for not getting vaccinated, Djokovic’s reasoning for not being vaccinated doesn’t appear to stack up on practical grounds.

Djokovic has previously expressed an anti-vaccination stance, so could Australian authorities really believe that the sole reason for him not being vaccinated is that he contracted COVID recently?

Assume for a minute that you can’t get vaccinated within six months of contracting COVID-19. Djokovic first contracted the virus in June 2020, and there is now a strong suggestion he tested positive again at some point in the past six months. That still leaves, at the very least, the entire first six months of 2021 in which he had ample opportunity to be vaccinated.

On any logical assessment, there doesn’t appear to be a causal relationship between him recently having COVID and not being vaccinated.

Despite rumours to the contrary, the rejection had nothing to do with Djokovic’s visa. The tennis star was granted a visa in around November, which was for athletes and is the same visa that other Australian Open participants have entered Australia on.

The decision entirely rests on his reasoning for not being vaccinated

Federal government sources confirmed that discussions were held between the Victorian government, Tennis Australia and Border Force about the valid exemptions for not being vaccinated.

Djokovic’s lawyers are appealing the Border Force decision, and it may well be overturned. If the court process drags on for days, he may have to be put into government accommodation or hotel quarantine.

This mess could have all been avoided.