Who’ll find love on our blind date? This week it’s Lucinda, 48 and Tom, 57 but will romance be on the cards? 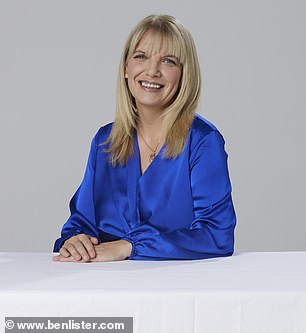 Someone who is passionate, thoughtful and fun. My celebrity crush is Boris Johnson — but before he became Prime Minister.

I was with my ex-husband for 23 years but I’ve been single for longer than I can remember. I’ve been on a few dates but I don’t really like meeting people through online apps — I prefer to meet in person.

Not great. Tom was already seated at the table when I arrived and he didn’t even look up. I had to pull out my chair and say hello to get his attention. He didn’t stand up or even smile. Perhaps he was nervous? Physically, he wasn’t my type. He reminded me of a shorter Gordon Ramsay.

Easy To Talk To?

No! I’ve never been on a date where I’ve struggled for conversation so much. Tom didn’t seem interested in anything I had to say. It didn’t help that the restaurant was loud, as I struggled to hear what he was saying.

It felt so awkward that at one point I thought: ‘Have I turned up to the wrong blind date? Is this the person I’m supposed to be meeting?’

LIKED? He chose a champagne from my native West Sussex.

I’m disappointed as I went into it thinking that at least I might come away with another friendship. But it was clear early on that we were completely the wrong match.

I didn’t have my glasses on so I couldn’t read the menu properly. I just picked the only thing I could see — some kind of chicken dish — and it wasn’t very nice, so I could have made a better choice.

Absolutely not. I got the feeling he didn’t want to be there. He didn’t seem to know why he was there. He also quibbled over the bill which made me feel awkward. He was polite about it, but I thought he should have just left it. It was so unnecessary.

No. It was a clunky end to the date. He asked me what I was going to do next and I said I might go to the shops. He said he was going to stay in the restaurant and do some work, so I made my excuses and left.

What do you think he thought of you?

He didn’t smile or laugh once, as far as I can recall, so I don’t think he wanted to be there.

They would know he is not right for me.

Divorced with one 23-year-old son.

It is important that she has a sense of humour. She also needs to be curious and thoughtful, and have a variety of interests.

I was married for 17 years until 2015. I’ve only had a few short-term relationships since then.

No, I don’t really do nerves. I’ve been a journalist since 1986 so I’m used to speaking to new people.

She was wearing a nice bright blue outfit, and my first impression was that she was slightly nervous. She was smiley and friendly enough, but seemed unsure about the date.

Easy To Talk To?

She appeared to be slightly reticent at the start. I’m used to initiating conversations, and I know some people are happy for you to take the lead — but this felt like rather hard work.

She seemed reserved when I asked about her background, her family and her kids. I felt as if I was pushing for information on the sorts of subjects which should have been very straightforward.

She’s lived and worked in a small area of West Sussex all her life, and I find that intriguing, as I’ve lived all over the world.

LIKED? The restaurant was very nice.

Given that, I was interested in her take on what it’s like to have always stayed in the same place.

None that I can remember — although at one point she said she didn’t want to meet someone who always talked about sport. I’m a sports journalist!

No, I’m afraid not. She’s an attractive woman but there was no chemistry for me.

We shook hands at the end of the date but she made it pretty clear she’d had enough, so we wished each other good luck and that was it.

What do you think she thought of you?

I really couldn’t tell. She’s quite reserved and it wasn’t obvious what she thought of me.

Yes, she seems nice but they’d prefer her if she opened up a bit more.