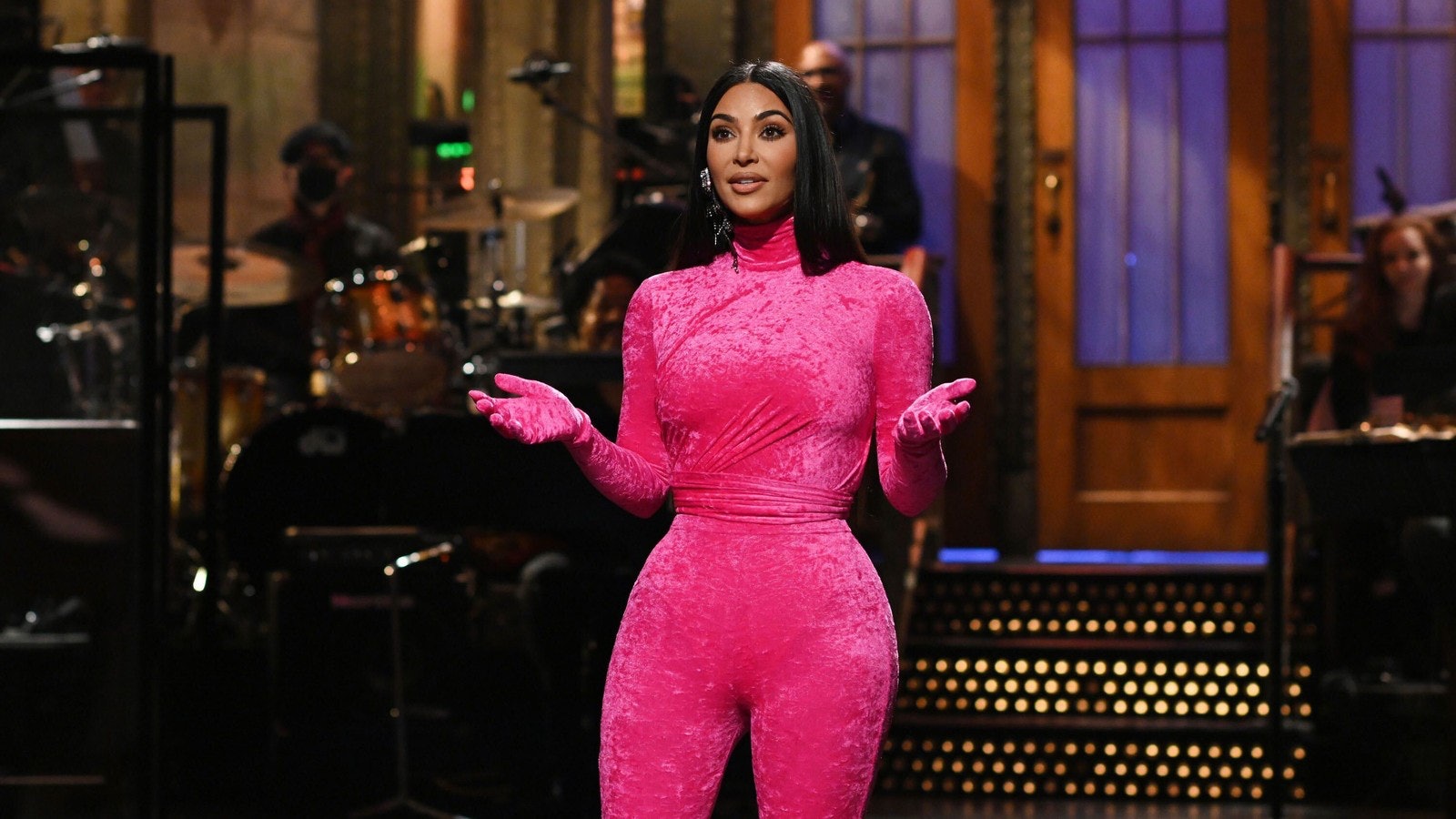 From the minute Kim Kardashian stepped out on the 8H stage in her crushed velvet Balenciaga jumpsuit, it was clear she meant business. No one was off-limits on Saturday night, not her sisters, her famous ex, or even herself. Kim roasted everyone and it was because of the social media star’s ability to turn the joke on herself and her family so effortlessly that made Kim’s SNL debut a success. For better or for worse, the Kardashians have been the butt of the joke for over a decade, so it just felt natural that Kim would join in when it was her turn to take on sketch comedy’s biggest stage. But who walked away with the most burns courtesy of Kim and who just needs to apply a little aloe and walk it off? Let’s look at all the jokes directed at the Kardashian/Jenner family during Kim’s Saturday Night Live moment.

Before turning the roast on anyone else, Kim started off her hosting debut by proving she herself can take a joke. Some of the first words out of her mouth were self-deprecating, which was a much-needed sign that Kim would not be taking herself too seriously that evening. “I know, I’m surprised to see me here too,” she said to the audience in the beginning of her monologue. “When they asked, I was like, ‘You want me to host? Why? I haven’t had a movie premiere in a really long time.’” Of course, Kim is talking about her famed sex tape with singer Ray J, the video that many people credit as launching Kim into stardom. “I mean, actually, I only had that one movie come out and no one told me it was even premiering.”

By bringing up this no doubt dark moment in Kim’s past, she’s addressing the question that much of the public (and Debra Messing) were asking after it was announced that Kim would be hosting SNL: Why? By the end of the night, Kim fully answers the question and leaves no need for follow-ups.

Immediately after addressing the infamous tape, Kim turned on her sisters, completing the narrative that her family hopped on Kim’s coattail and have yet to get off. “I’m excited to be here tonight to show you guys that I’m so much more than just a pretty face… and good hair and great makeup and amazing boobs and a perfect butt. Basically, I’m just so much more than that reference photo my sisters show their plastic surgeons.”

But it wasn’t just immediately family who felt the heat. Corey Gamble, Kris Jenner’s longtime partner, was the recipient of what may have been the most pointed joke of the night. “The one thing I’m really proud of is that no one could ever call me a gold digger,” Kim said. “Honestly, I’m not sure how you even become one. So I asked my mom’s boyfriend Corey.”

Rumor has it, Corey was a good sport, and even stood up to applaud Kim after the joke landed.

Now, we get to some of the bigger targets of the evening. While Kim’s ex-husband, Kanye, reportedly helped her out with the SNL gig, he was not immune to the roast. Kim called the rapper out for his controversial presidential run (as well as Caitlin Jenner’s attempt at the California Governor race), confirming she does not have any political aspirations of her own. “I’m not running for president,” she said. “We can’t have three failed politicians in one family.”

But that was just the beginning for Kanye. Kim started off another joke with a compliment, calling him “the best rapper of all time” and a “talented, legit genius.” Just when you thought she was taking a moment to praise her ex, she went in for the kill. “So when I divorced him, you have to know it came down to just one thing: his personality.”

Kanye wasn’t safe for the night following Kim’s monologue, however. Later in the evening, the host bore a judge’s cloak and a bobbed wig to portray her sister Kourtney (we’ll get to that in a second), in the sketch, “The People’s Kourt.” In the clip, Kanye’s odd tweeting habits are on display as Chris Redd does his patented Kanye impression. This time, there weren’t as many jokes at the rapper’s expense, but simply putting actual tweets of his on display. It’s hard to roast a man like Kanye, but Redd’s caricature allowed for a good laugh.

Speaking of Kourtney, she was the only member of Kim’s family to get a full sketch dedicated to her. Kim plays Kourtney fairly accurately, as a vocally fried, unaffected, salad-loving judge, who just wants to make out with her rocker boyfriend instead of actually working. That sounds harsh when written down, but in the clip, Kim pulls off the imitation in a light-hearted way.