But that’s not enough to keep the 15-year-old from Wagga Wagga challenged, so she has also signed up to study accelerated maths at a new private, online high school that is offering British school-leaving qualifications to students around the world – and particularly Australia. 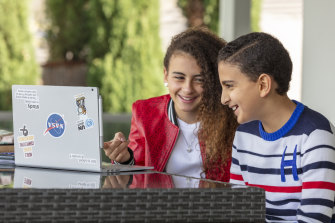 “I saw [the online high school concept] had really great potential,” said Mr Beaton, who also runs an organisation that helps students apply for admission to British and American universities. “Outside America, it is really non-existent.

“What we’ve seen is this rapid adoption. I think the drivers are more related to the school system, where there’s a portion of talented students that aren’t catered to.”

There are now 370 students aged between 10 and 18 from more than 20 countries, including Japan and Kazakhstan, he said. New Zealand is the biggest market, followed by Australia. Teachers come from all over, including Australia.

Almost half of the classes are accelerated, and more than three quarters of students attend CGA on top of their physical school.

The students can work towards international versions of Britain’s GCSE and A-Level school-leaving qualifications, or the American Advanced Placement exams, opening doors to universities in the United States and United Kingdom.

Maths is the most popular subject, reflecting the experience of students such as Karin, who feel bored by their year-level curriculum. “She used to do advanced maths on her own at home,” said her mother Mourine Mansour.

“While she was in year 7, she would do the Cambridge book for year 8 on her own. But when she got to year 9, she didn’t have any other resources – she was looking for something more. She found Crimson on Facebook.” Karin’s brother, Daniel, has also enrolled in English.

Applicants sit a diagnostic test, so the school can assess their level, and then join small, online classes based on the Harkness method, in which teachers facilitate discussion between the students and where, Mr Beaton says, there is “nowhere to hide”.

“The kids we admit will be achieving above their age range,” he said. “For our younger students we do check their maturity, they have to be able to handle the discussion-based nature of the class.”

It costs $4000 per subject, or $16,000 a year for a full-time student. Some countries, such as New Zealand, accept CGA as an alternative to traditional schooling, but in most Australian states parents need to go through the home-schooling application process.

NSW already has an official online high school, Aurora College, which is run by the NSW Department of Education. It runs a year 6 to 10 selective school in regional areas, and a suite of HSC subjects that may not be available in some regional schools, such as physics and mathematics extension 2.

Mr Rudd said there were two careers available to country kids like him when he was growing up – dairy or beef. “The chance to attend a great university opened a world of opportunity for me,” he said.

“I hope to be able to support Crimson’s Advisory Board and help bright, ambitious high school students from around the world shoot for the stars through higher education.”