I just witnessed something I suspect may horrify future generations; my kids ate an animal while they peered through the cage of another. We ate hot dogs as we watched a sullen Sumatran Tiger pace restlessly and I concluded our next animal encounter might need to be a VR experience.

It was this recent trip to the zoo that piqued my paranoia about the future judgement of our descendants. 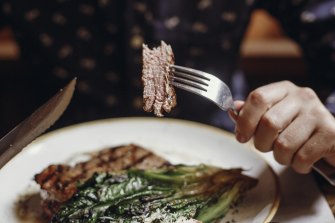 Steak for dinner? We’re set to see a lot less of this.Credit:iStock

They’ll mock our TV remotes (and our TVs), they’ll roll their eyes at our coins, and pity us for the 20 hours we spent in an aircraft, only to arrive somewhere else on the same planet.

How many other normal activities are we partaking in day to day which will be the source of shock for our unborn descendants?

Some house-hunting friends recently warned me off looking at properties with off-street parking, explaining that autonomous cars will become the norm and car parks will be obsolete. Having just paid a motza for a house with a car spot, I nearly choked on my tea. But futurist Ross Dawson agrees. He says autonomous cars will negate the need for car parks in the future, “I would say car parks are probably, and hopefully, one of the things which we’ll look back at as an extraordinary waste, which will seem mind-boggling in the future”.

The idea is that self-driving cars will be rented rather than owned and won’t need parking spaces because they just … won’t park. Dawson says the shift to autonomous electric vehicles is inevitable and a much safer alternative: “The best autonomous vehicles are far better than the average human driver by a long shot.”

As the owner of a non-autonomous vehicle with multiple unaccounted for scrapes and bumps I, for one, welcome our robot car overlords.

An end to the personal data free-for-all

Every day, we give away huge amounts of personal data about our shopping, travelling and living habits. This willingness to hand over this personal information for free, without any transparency of how it’s being used, will astound future generations. Very few of us think twice about being monitored by corporations, some even welcome the idea of targeted ads. Though I’ll go nuts if I see another Facebook ad for Moroccan home decor, frankly there’s only so many diamond patterned poufs a girl can possess.

Dr Stefan Hajkowicz, who works in strategic foresight at CSIRO, says people are becoming more savvy and believes there will eventually be greater protections in place to protect people’s data rights and privacy online. “There is going to be a requirement to put you back in the driver’s seat, that you own the data and that will be backed up by legislation.” So although you won’t get to drive your car, you’ll get to be in control of who knows where your car drives you.

I’ll bet that by 2050, the notion of killing animals for meat, at our current rate, will be considered barbaric to future generations. While animal food production will still exist, footy club raffles of the future might feature some juicy meat tray alternatives.

Hajkowicz predicts that plant-based meat will be flying off the shelves – more than it already is. “You’re going to end up with whole new ranges of food … merging sort of biological sciences with physical sciences to create engineered food production systems”.

Hajkowicz is confident these meat alternatives will be engineered to be tasty, healthy, and a hopeful solution to feeding our future population through environmental challenges. “Synthetic biology is resilient to climate change and drought. It doesn’t matter how bad the drought is, we can still produce as much food as is needed.”

Petrol-powered leaf blowers still exist in 2021. I know. Odd. There’s no doubt future generations will gasp in horror at how little we’re willing to sacrifice in order to save the environment. “Climate deniers existed and ruled entire nations?” they’ll shout in disbelief. They’ll be dumbfounded by our stubborn persistence with fossil fuels and slow uptake on low-emissions technologies. And they’ll think they were the first people to be frustrated by it.

Prime Minister Scott Morrison vowed to reach net-zero emissions “as soon as possible, and preferably by 2050”, so what might Australia’s energy sources look like when we get there?

Dr Alan Finkel, the government’s adviser on low-emissions technology, says he hopes the future of Australia’s energy will be focused on hydrogen. Finkel describes it as “a near-miraculous fuel that could play a major part in eliminating many of the remaining sources of emissions”.

When asked about the equally important matter of TV remote controls being obsolete in the future, Finkel says: “I long for a return to televisions that only have four stations, and a rotary dial at the bottom of the screen for selecting the station.” I guess we can be happy he’s not the adviser for TV technology.

While it’s tough to predict the mindset of future generations, the advantage of crystal balling so far into the future is that it’ll take a long time to be proven wrong. And by that time I’m sure my grandchildren will be too appalled by the way I once lived to talk to me, let alone read my collected works.