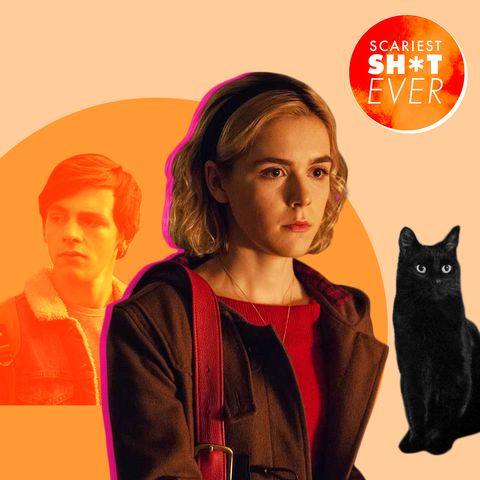 Halloween isn’t just a holiday—it’s our entire October mood. So celebrate the best time of year with a month’s worth of stories that will keep you up all night long. (Binge-watching and eating candy, probably. Same, tbh.) Cheers, witches!

On Oct. 26, Netflix viewers will nestle comfortably in Greendale thanks to Riverdale show runner Roberto Aguirre-Sacasa. Based on the horror comic series of the same name, Chilling Adventures of Sabrina will bring to life a version of Sabrina Spellman that will look and feel nothing like the family-friendly TGIF teen witch played by Melissa Joan Hart a lifetime ago. Below, a guide to the main cast and their comic book counterparts:

In the comic series, Sabrina explores her double life as a witch and mortal as a teenager in the 1960s. In addition to darker storylines than the Sabrina the Teenage Witch series, Chilling also finds the Spellmans with an appetite for um, human flesh. It remains to be seen if Netflix has taken the TV adaptation this far, but let’s hope Kiernan Shipka, who plays Sabrina, at least gets to ride a broom at one point, just like her comic book character?

Much like the comic version (in any series), TV Hilda appears to be more forgiving than Zelda, and has a soft spot for Sabrina. You likely last saw actress Lucy Davis in Wonder Woman (she was most excellent as Etta Candy), unless you’re old enough to remember her from the BBC Pride and Prejudice series with Colin Firth (she was Maria Lucas).

Zelda is more wise than Hilda, but they both mean well for Sabrina (pretty sure). As the Netflix trailer shows, she definitely has control over her sister and at one point elects to kill her because “she annoyed me.” Don’t worry, witches can’t die like this, right? Miranda Otto was most recently in Annabelle: Creation and episodes of Homeland, but perhaps you’re more familiar with her work as Éowyn (who has the biggest yet unreciprocated crush on Aragorn) in the second and third Lord of the Rings movies.

In the comics, Harvey is killed by other witches after a misunderstanding orchestrated by Madam Satan, but comes back to life via Sabrina’s dad Edward (ie. body of Harvey, mind of Edward). It’s a little twisted, yep, but how much are you willing to tolerate if that means seeing Sabrina and Harvey (Sharvey? Habrina?) together forever—in print and on screen? Of course, if you’re a Disney Channel fanatic, you already know who Ross Lynch is. Or, you’ve been an OG fan of The Driver Era, his band with brother Rocky.

Like the comics, Netflix’s version of Sabrina’s pansexual warlock cousin is punished by the Witches Council to never leave the Spellman house… for 75 years. As Chance Perdomo told Syfy recently, he is fully aware of the responsibility that comes with playing a role that’s rarely seen on TV, one that comes with “new narratives that weren’t necessarily spoken of or given light.”

In the comics, Rosalind Walker is a redhead who’s actually the archenemy of Sabrina. In the TV series, Roz is one of Sabrina’s BFFs and is the outspoken daughter of Greendale’s minister. Jaz Sinclair previously starred in When the Bough Breaks, Slenderman, and episodes of The Vampire Diaries.

Sabrina’s familiar was originally a human named Samuel, according to the comic books, but was turned into a cat by the witches of Salem Village after he got a witch pregnant. It’s unclear if the series will have a flashback to Salem’s origins, but it’s nice to see that the Netflix version looks more put together than the comic book version.

Madam Satan in the comic book series has a rather tragic background: after being dumped by Sabrina’s father Edward (for Sabrina’s mother), Madam Satan (who was known as Iola and was a witch) commits suicide and ends up in Hell. She’s brought back to life, essentially, by two amateur witches and seeks revenge on Edward via Sabrina by posing as a teacher at Baxter High. In the TV series, according to an official character description, Madam Satan comes to the forefront after the devil’s handmaiden kills Sabrina’s teacher and possess her body. (Both versions of Madam Satan want Sabrina gone.) Michelle Gomez’s resume includes a recurring role as Missy on Doctor Who and episodes of Gotham.

In the comics, Satan was the most important figure in the Church of Night and shows up at Sabrina’s 16th birthday/dark baptism as a half-human, half-goat creature. In the Chilling Adventures of Sabrina trailers so far, there are flashes of a similar creature. Good luck to all of us and our future nightmares.