Prompted by  Tesco’s decision this week to drop the price of a 25p Freddo to its Nineties price of 10p, we wondered how our other  favourite treats have evolved. 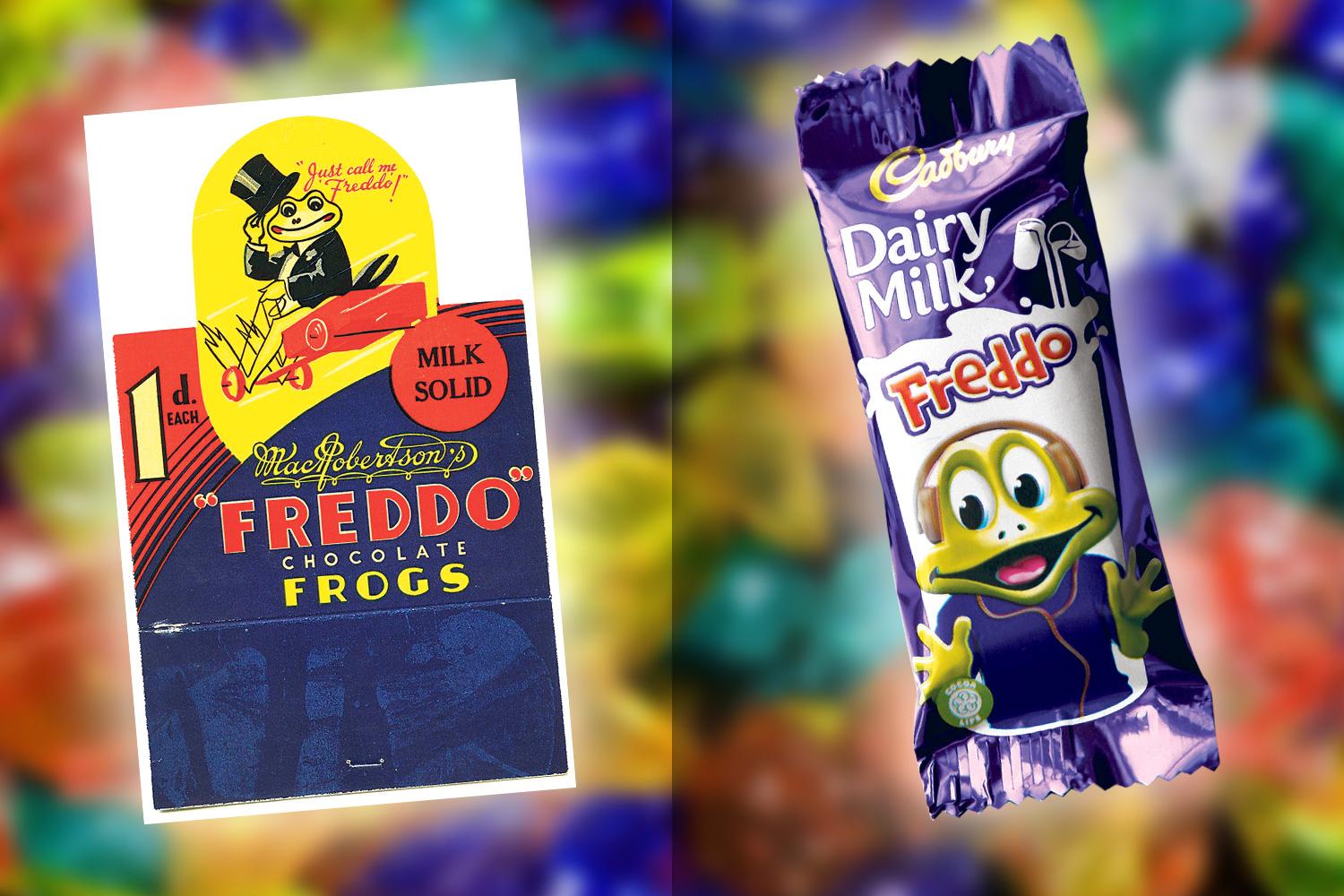 From Cadbury’s Fudge to the “crumbliest, flakiest chocolate” Flake, makers love  tinkering with their products.

Giulia Crouch compares  choccy wrappers  from way back to how they look today. 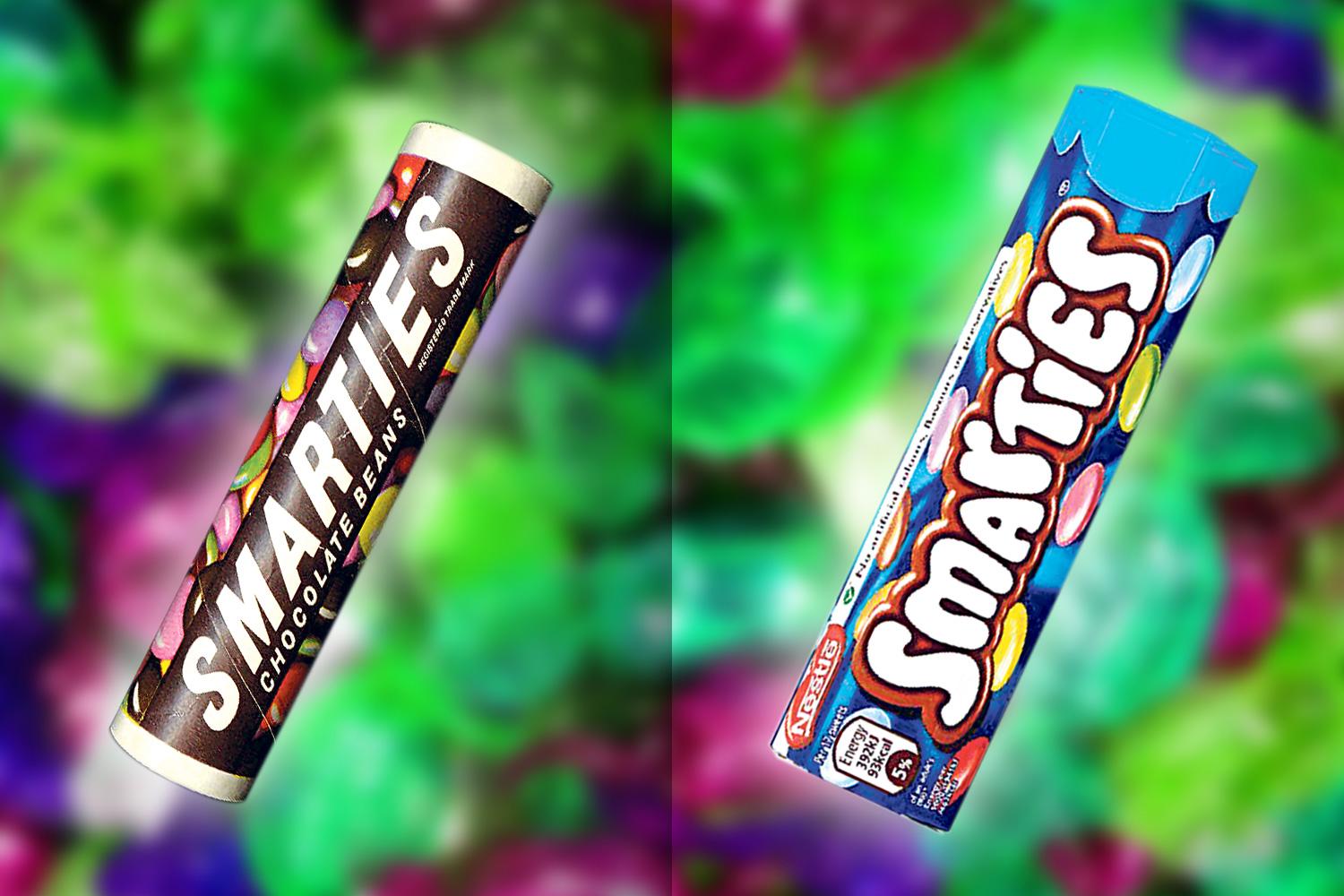 A tube from the 1950s, left, and modern equivalent, above. Called Chocolate Beans when first made  by Rowntree’s of York in 1882, they were renamed “Smarties” in 1937 after   trading standards said the words “chocolate beans” were  misleading. 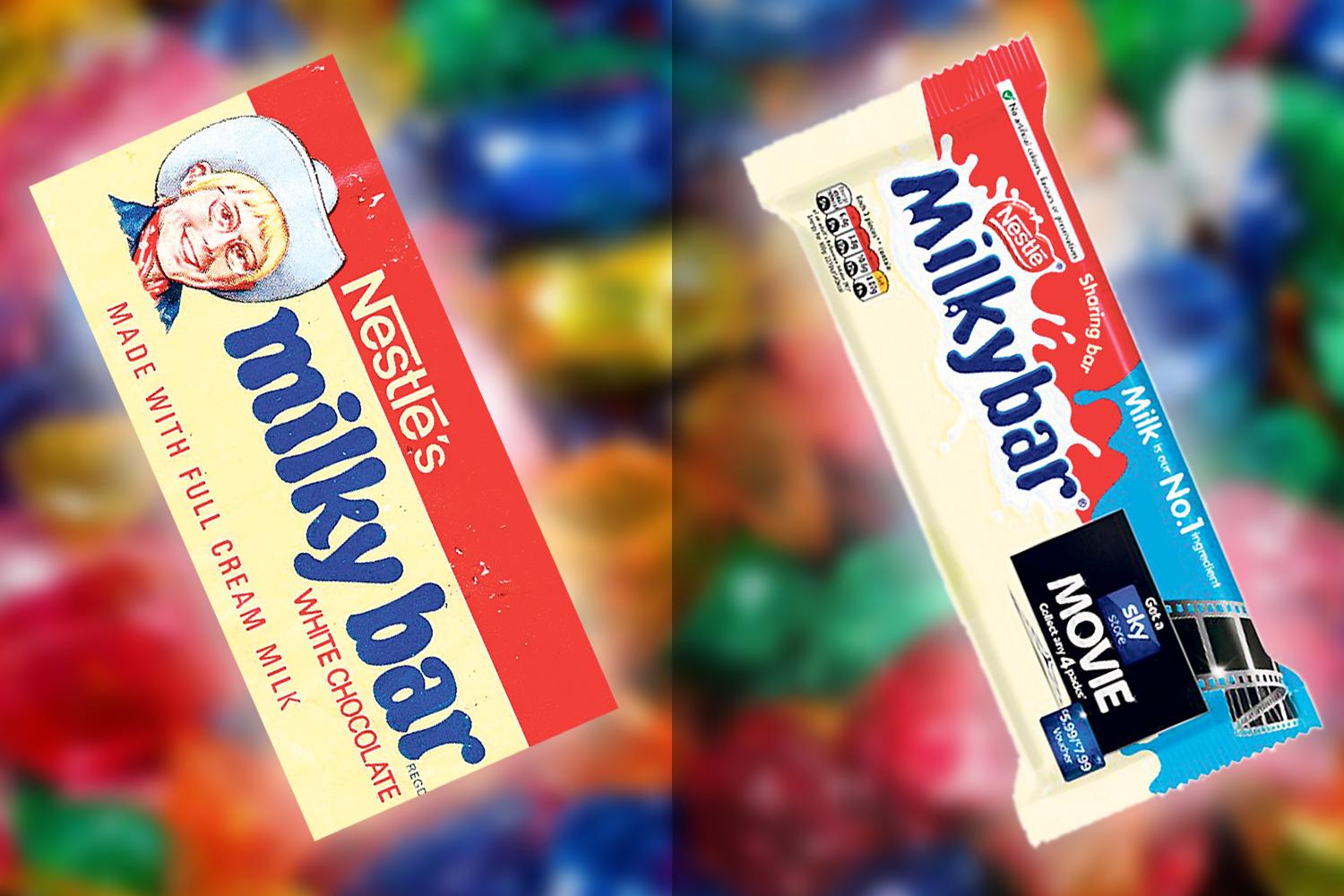 Launched in 1936, Milkybar is the number one white chocolate brand in the UK. It is  best known for its advertising using the Milkybar Kid introduced in 1961, pictured above next to the modern bar. Ten youngsters have taken on the role of the blond, floppy haired cowboy, the first being Terry Brooks, who is  now 67 and living in Spain. 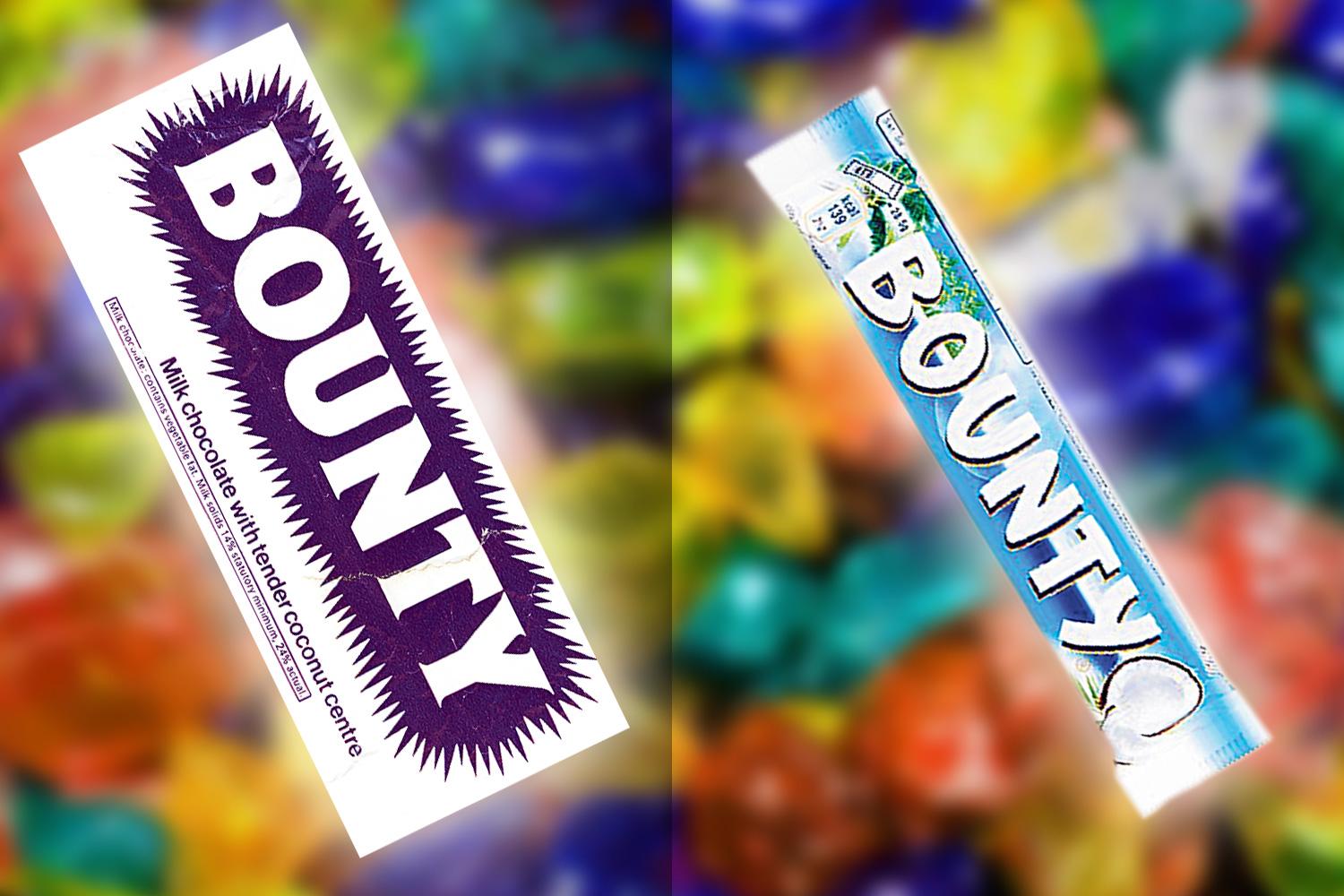 A coconut filling encased in milk choc, the Bounty was introduced in 1951. The wrapper has changed from purple to blue, and  a dark chocolate version is also available. In  Australia there is also a  cherry variation. In 2003 Mars, which makes the bar,  trademarked the Bounty’s shape in the EU. 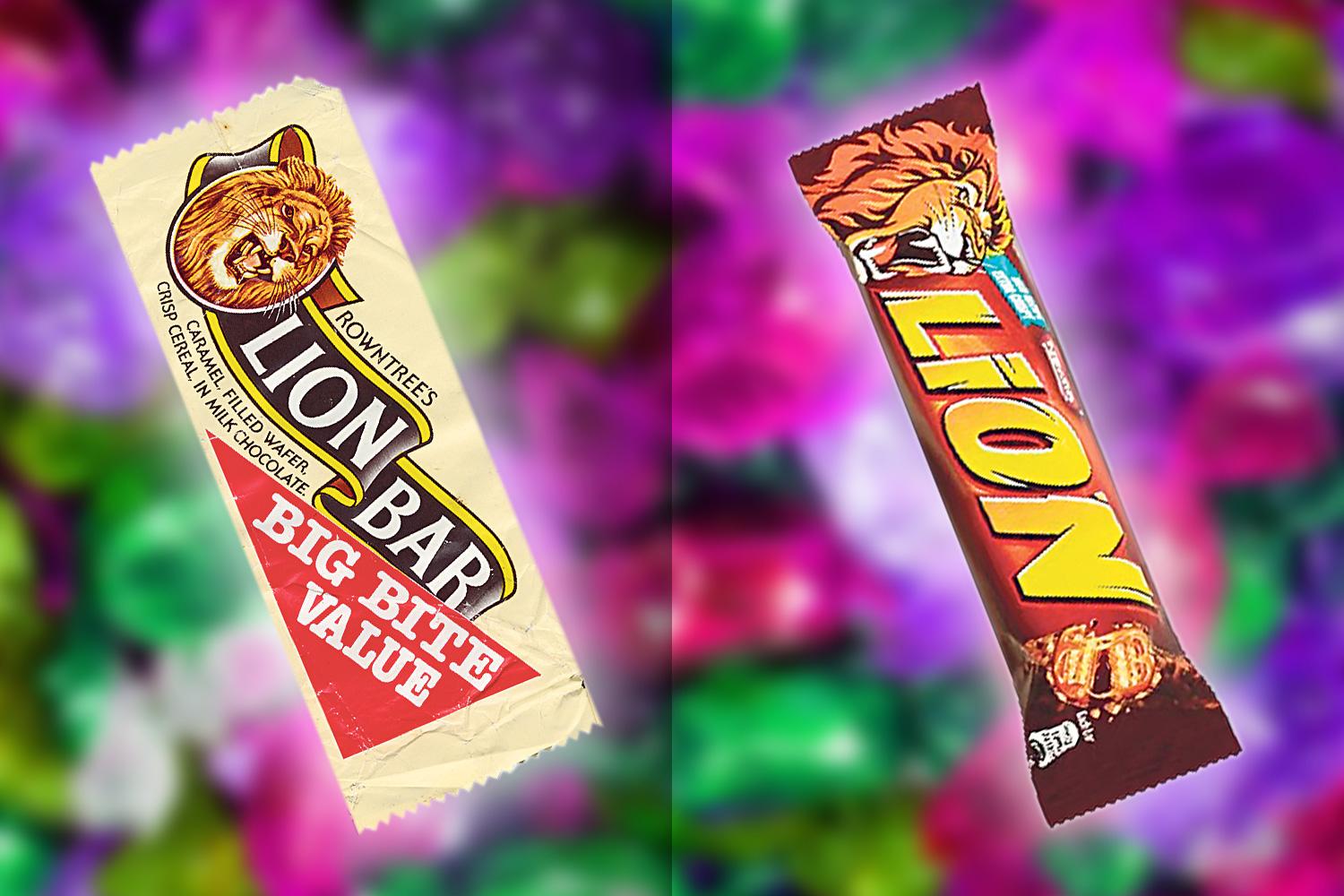 Created by an experimental confectioner named Alan Norman in the 1970s, the Lion Bar was known as the Big Cat in some areas until the 1990s.  Pictured above is bar from 1984 and how it looks now. Several special editions have been launched,  including the White Lion and Peanut Butter Lion. 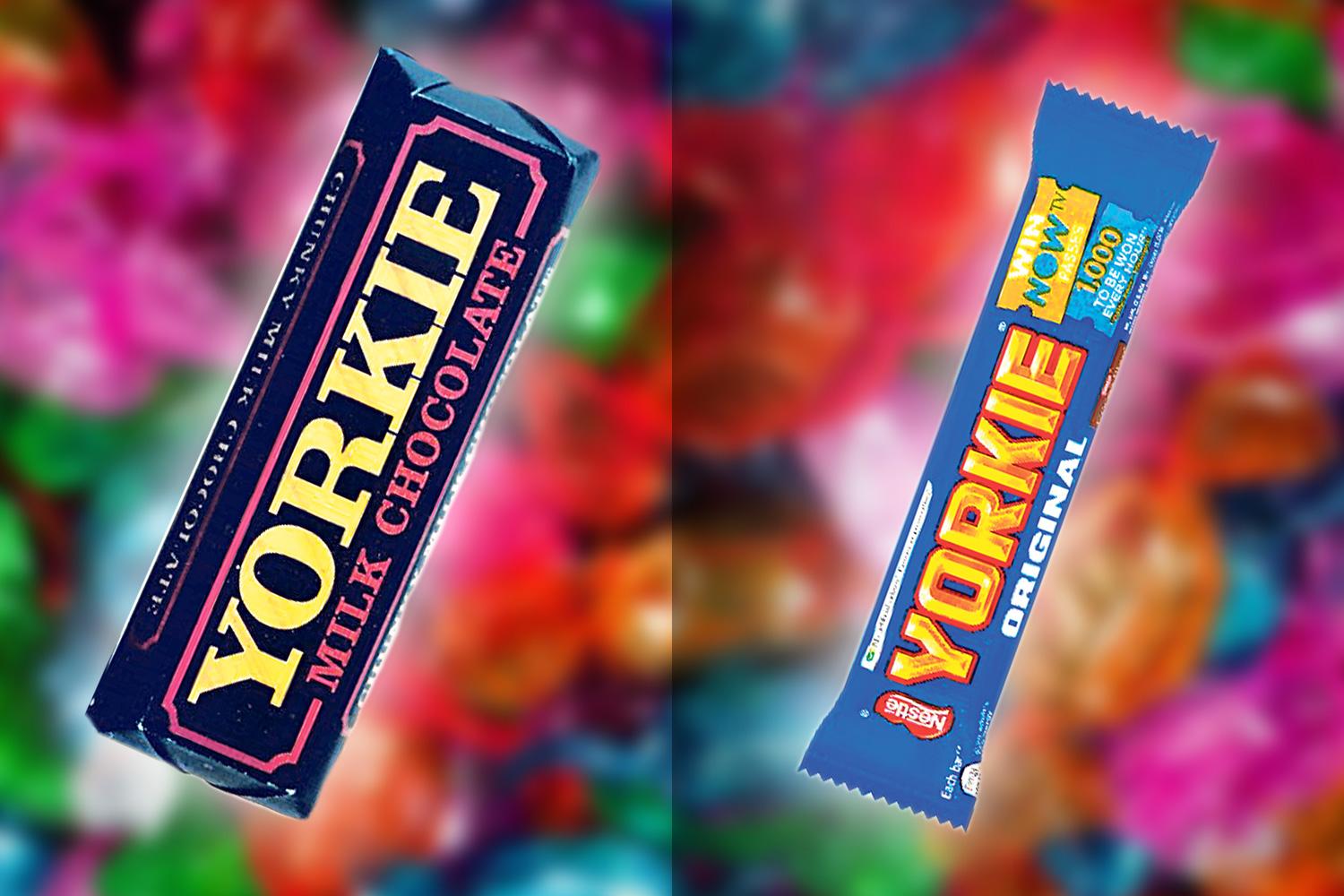 Aimed at men on its launch in 1976 because of its chunky size, Yorkie bars dropped the “It’s not for girls!” slogan in 2011 and replaced it with “Man fuel for man stuff”. Its original wrapper, left, has morphed into   blue, red and yellow, above. In 2006 a special edition  for girls was sold wrapped in pink packaging. It is  named after York,  where it was made until 1994. 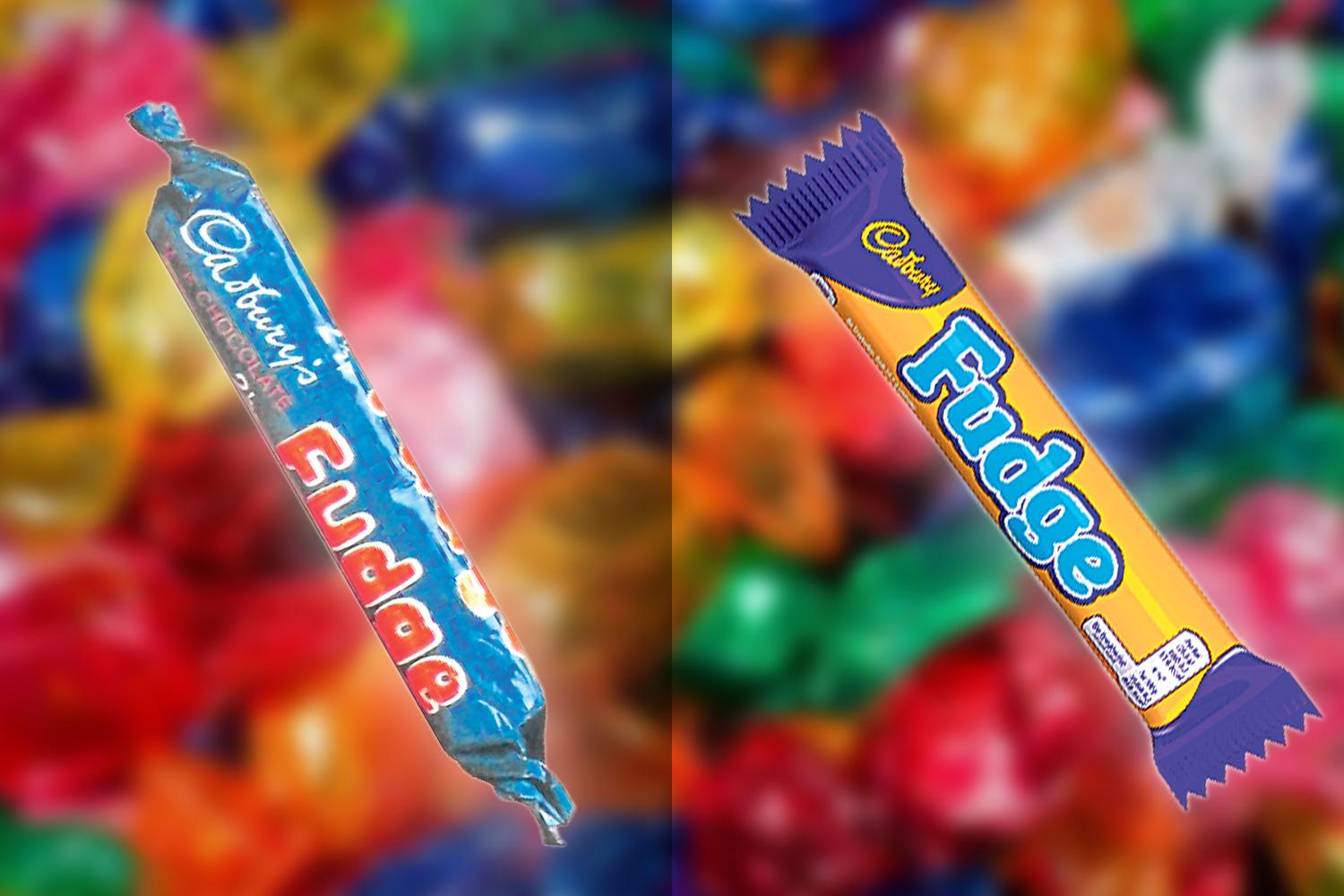 This bar by Cadbury’s was launched in 1948 and in the 1970s was advertised using the slogan “A finger of fudge is just enough to give your kids a treat”. The wrapper has evolved over the years, above. 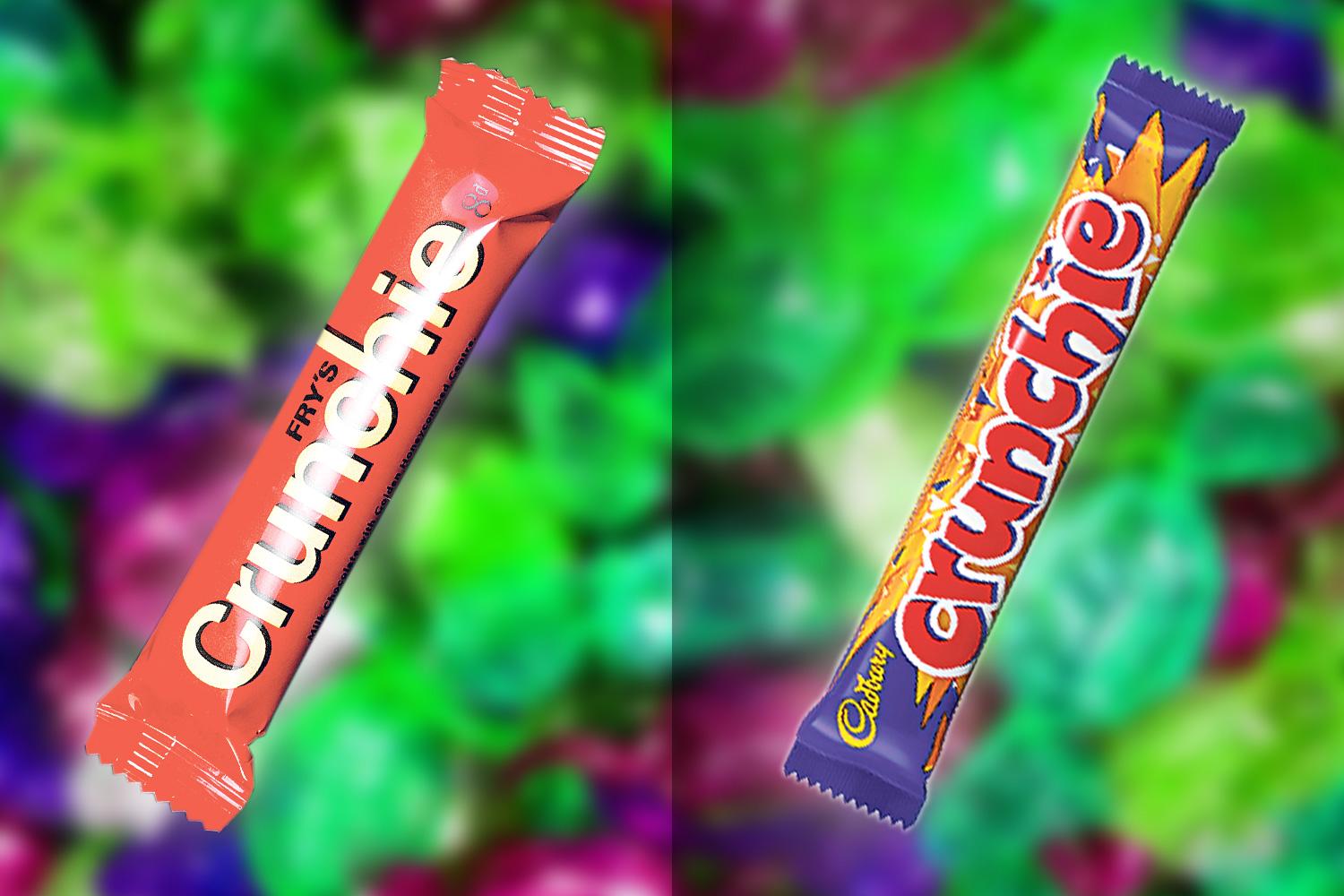 This honeycomb bar was introduced by Fry’s in 1929 and  advertised with the slogan “Crunchie makes exciting biting” until the 1980s, when it was changed to “Get that Friday feeling”.  The left picture is from the  1960s, with the modern, Cadbury’s version it. The  1990s  saw special editions including  lemonade, Tango Orange and champagne flavour. 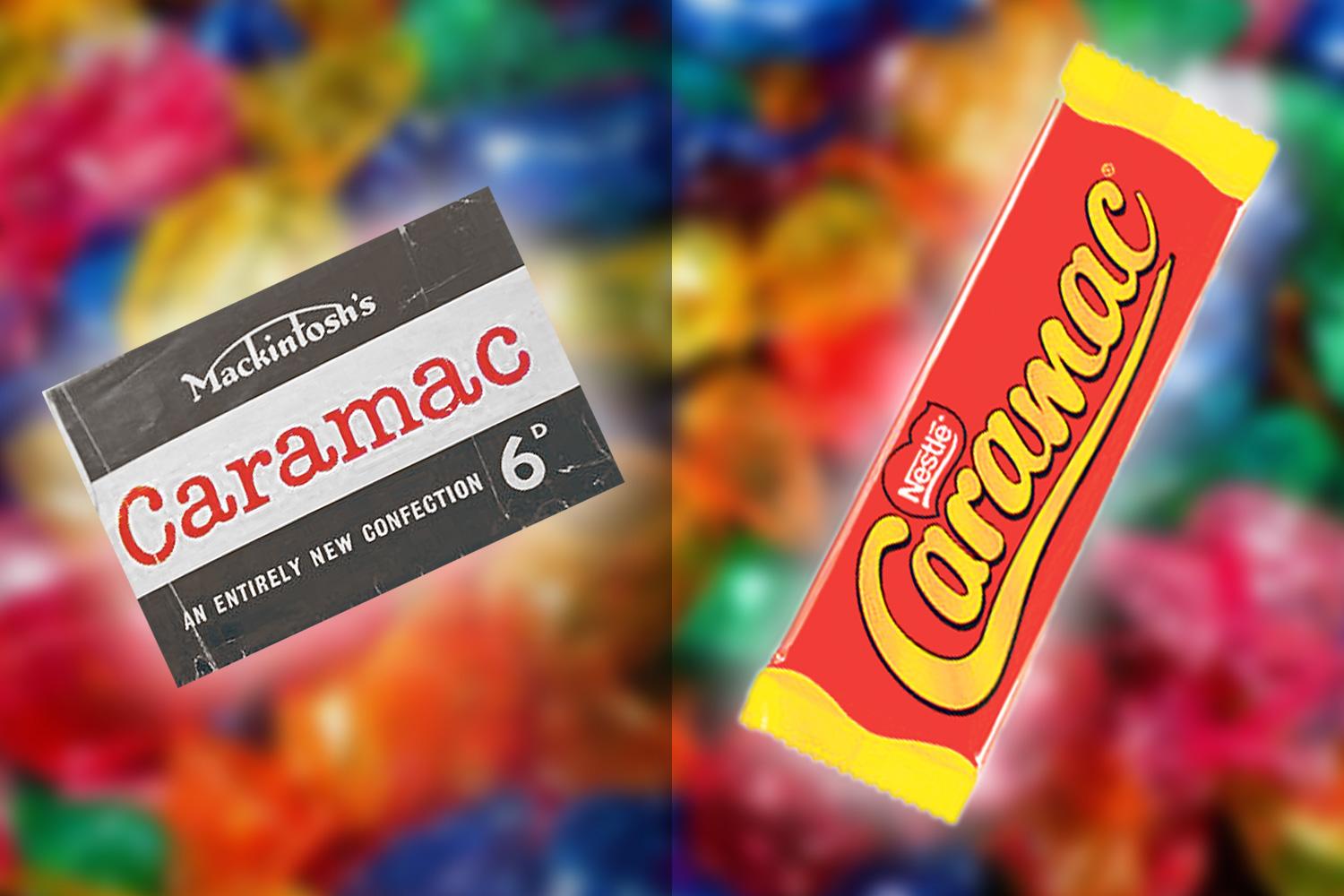 Introduced in the UK in 1959, this takes it name from a mash-up of “caramel” and “Mackintosh” – which made it. The name was the result of a competition won by a woman called Barbara Herne. The left wrapper is from the 1960s, the other modern. 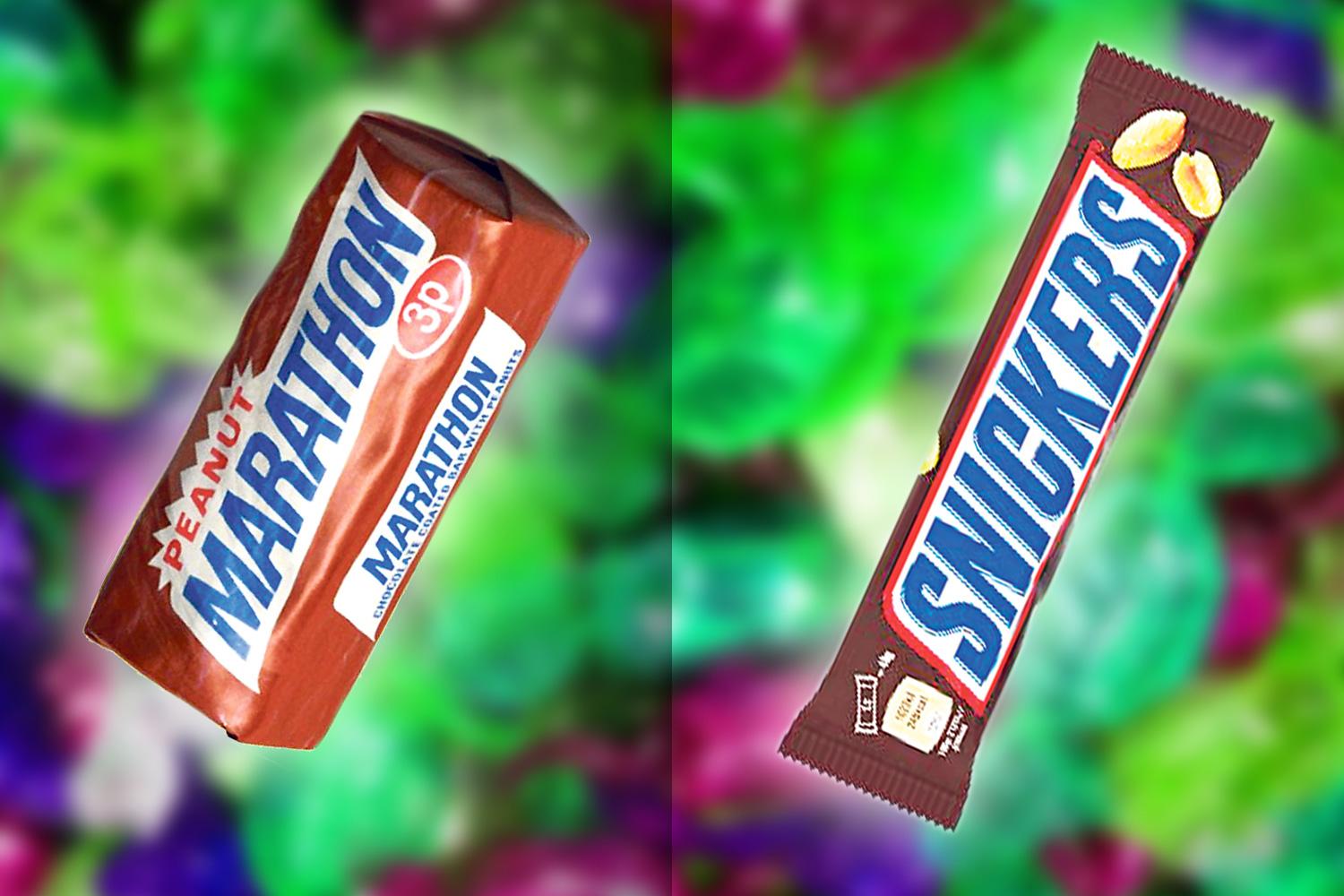 Now called  Snickers, the Marathon was created in 1930. It has  always been called a Snickers in America and in 1990 Mars, which makes the peanutty snack, decided to change its name in the UK to match with the US  brand. The left wrapper is from  1970s, the other is modern. 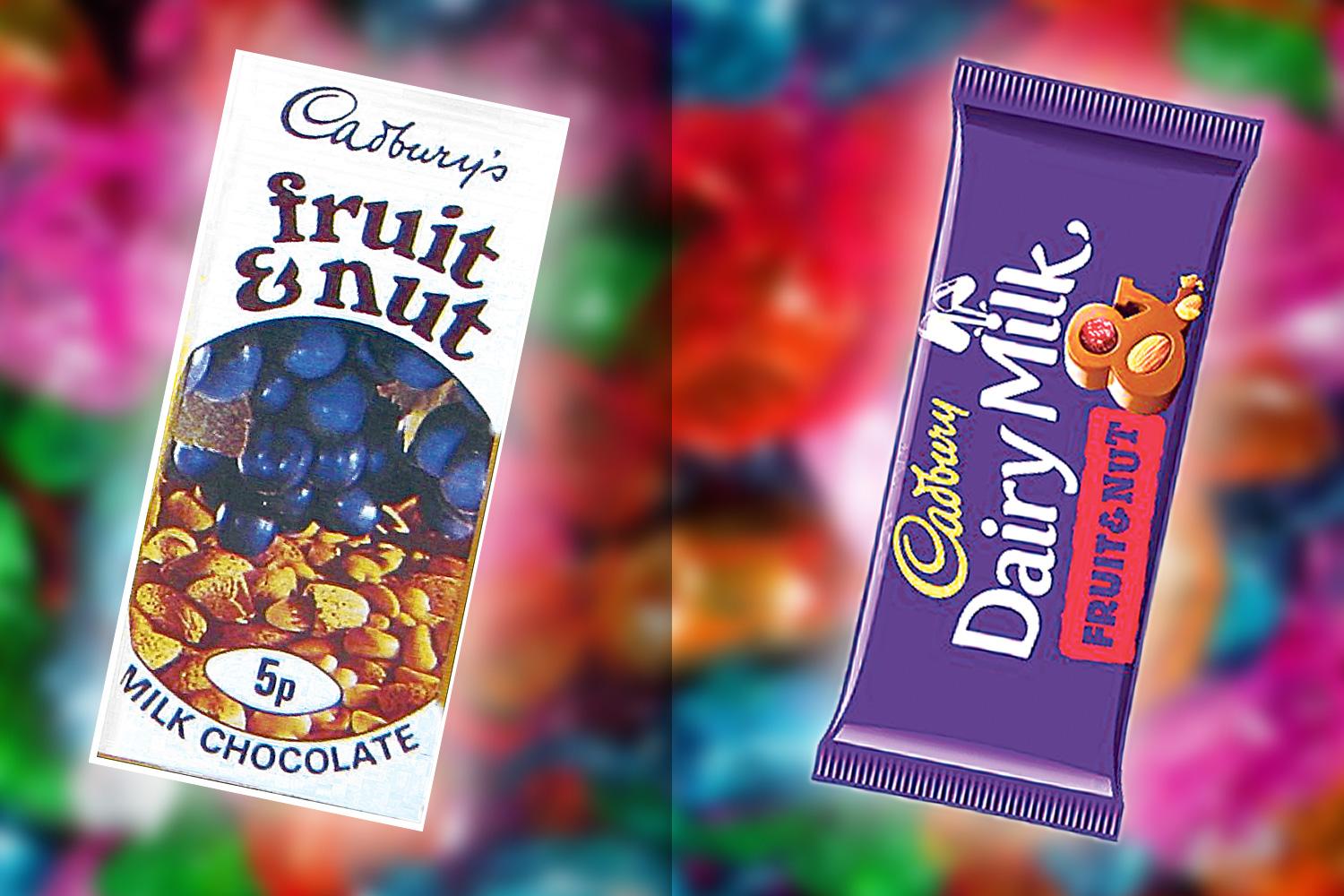 “Everyone’s a fruit and nutcase” sang comedian Frank Muir to the tune of the Danse Des Mirlitons, from Tchaikovsky’s The Nutcracker in the famous advert for this bar. Launched in 1926, the  recipe contained Brazil nuts,  almonds and raisins. The  wrapper, left, is from 1972, the modern one is on the right. 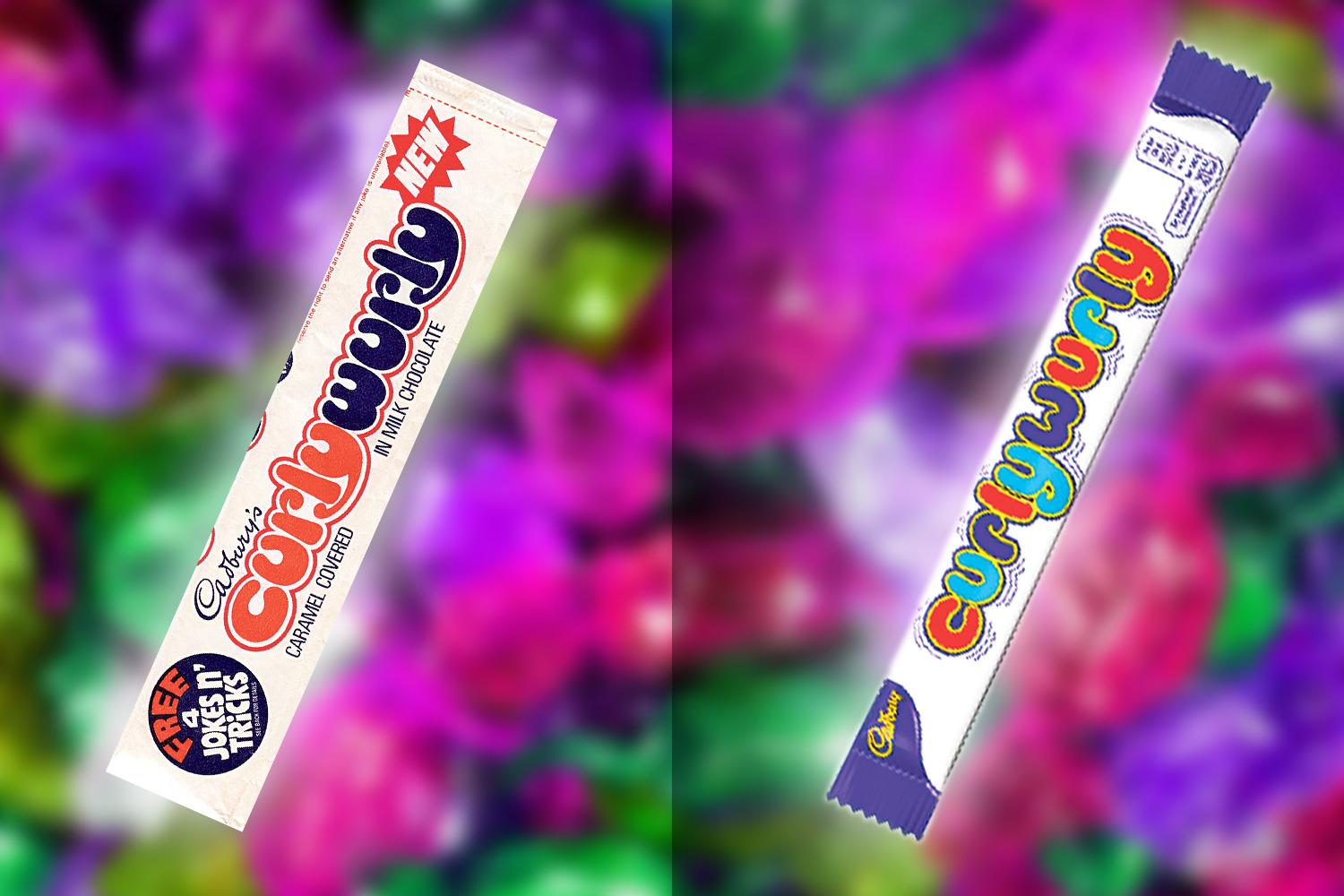 This toffee-filled bar was created almost by accident by confectioner David John Parfitt at the Cadbury factory. He was experimenting with some leftover toffee when he wrapped it into the well-known shape it is today. It was launched in 1970, left. Its wrapper has become more  colourful, above. In other countries Curly Wurly goes by the names Loop and 3 Musketiers. 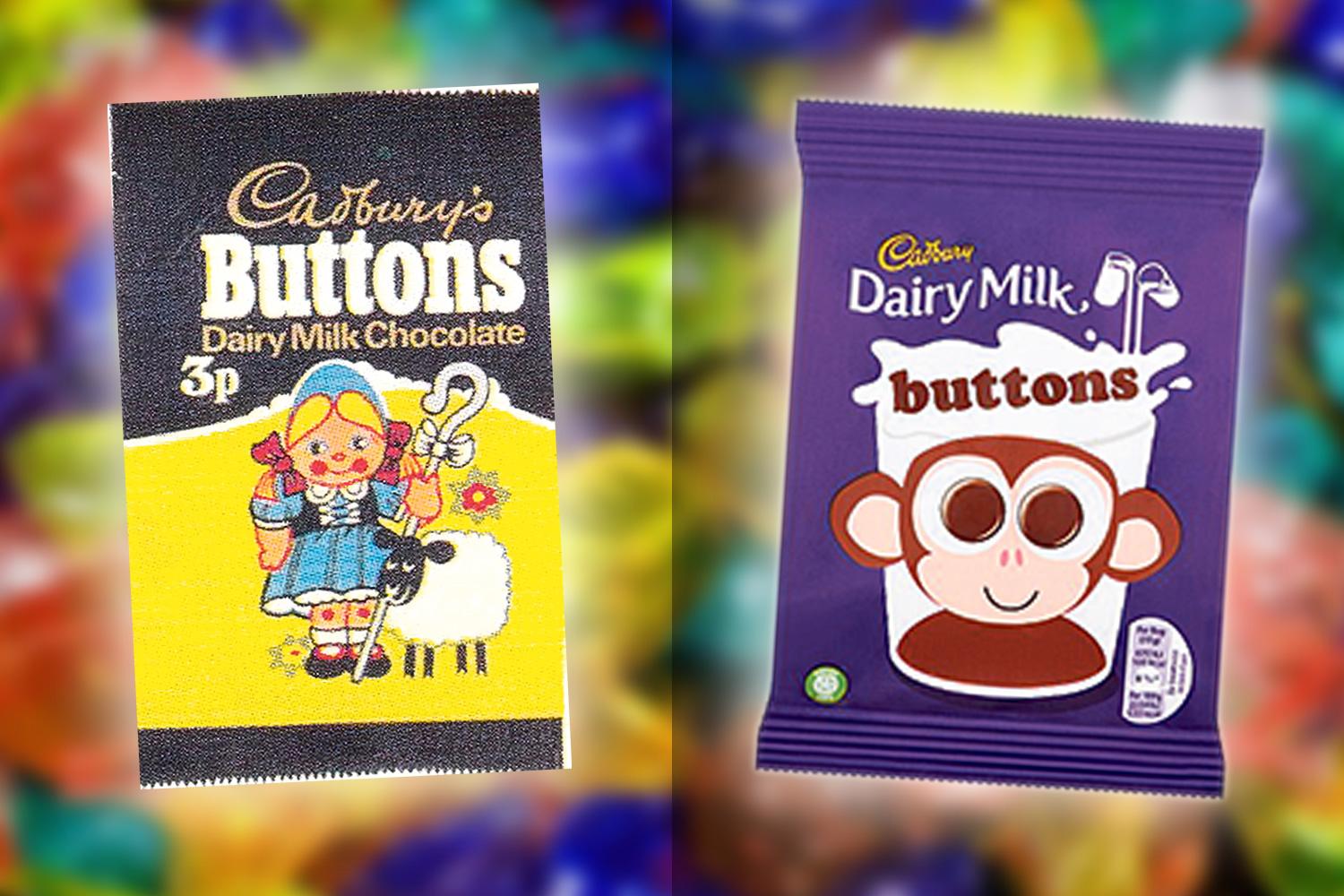 Cadbury Buttons were first sold in the UK in 1960, left. Now they come in regular milk choc, above, plus white choc and in giant versions.