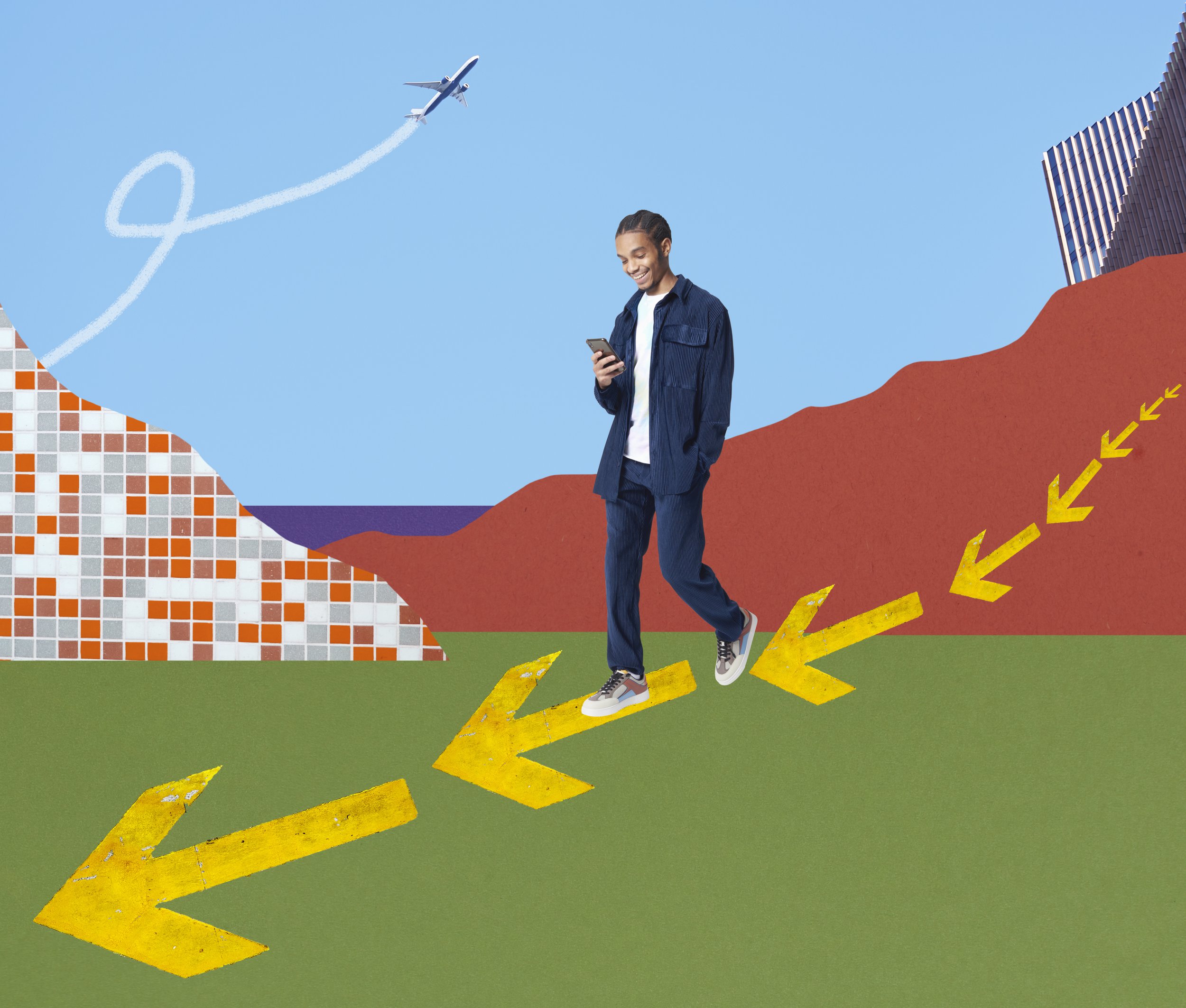 That’s the premise of the FIRE movement, which is now motivating millions of people across the world.

The movement, which takes its main ideas from a book called Your Money Or Your Life, published in 1992 by Vicki Robin and Joe Dominguez, urges people to pursue Financial Independence to Retire Early, using a combination of frugality and basic investment techniques.

The techniques are striking a chord with millennials in particular, with studies suggesting that one in four 18 to 34-year-olds now have early retirement as a financial goal, while hundreds of thousands of people are quitting their jobs as part of a post-pandemic Great Resignation.

Fashion designer Sarah Cordery, whose design business Sarah Denise Studio is based in Manchester, is one fan who hopes the FIRE principles will change her life.

‘I love the idea of having complete freedom to do as I wish — to travel and learn and work when I want — isn’t that the dream?’ she asks.

‘That is what financial freedom provides.’

But how can you find out whether it is right for you, and how could it change your life?

How does FIRE work?

The money you save goes into two pots, starting with an emergency cash fund for unexpected expenses, and the rest saved into cheap tracker funds that copy the performance of the stock market.

Those who explore the movement are also encouraged to try to pay off their mortgages before declaring that they are financially free, and quitting the rat race for good.

‘The aim of the FIRE movement is quite simple — save as much as possible, spend as little as possible, and invest aggressively to enable the earliest possible retirement,’ says James Norton, head of financial planners at investment group Vanguard.

‘It’s a tough goal, but for those with the resources and motivation it can be done with an extremely disciplined saving approach and an appropriate, tax-efficient, investment and financial planning strategy.’

Twenty-five times your annual expenses? How can anyone save that much?

The FIRE movement demands some big financial and lifestyle sacrifices. Sarah, for example, has house-shared rather than had a flat of her own while renting.

‘It didn’t make sense to live alone and spend so much on a flat when I could have more fun in a community and save,’ she says.

Katie and Alan Donegan, below, lived in a small flat in Basingstoke, rather than upsizing to a home in a more expensive area.

James Hawkes, who runs financial freedom newsletter Freed, says that aggressive budgeting can help avoid ‘lifestyle creep’, where you increase your spending gradually over time, helping you to build up a savings pot instead.

He also suggests taking on side-hustles to boost your income.

‘A great example that’s hot right now is Rover, where you can earn extra cash for looking after cats and dogs. Extra cash and some fluffy cuddles without the commitment!’

To work out how much you would need to save, try the FIRE online calculator.

FIRE savers often put away 25% to 50% of their income every month by eating frugally, ditching the car and ensuring that they do not go out socially.

Where do I store my savings?

Inflation is really high right now, so even if you are making lots of sacrifices to save cash, the money you have will lose its value over time if it is in a poorly performing savings account.

History tells us that, over the longer term, investments out perform cash savings, but FIRE fans also try not to allow the charges on their investments to eat into their retirement funds.

Cheap index trackers, such as the Vanguard FTSE 100 tracker fund, are the most popular products for those wanting to achieve FIRE.

These go down as well as up, but because these investors are looking at the very long term, they are less worried about short-term fluctuations.

You may wish to use a pension — the most tax-efficient way of saving — for much of your money, but remember that you cannot access pension savings until you’re 55, so this is no good for money you will need sooner.

Putting your tracker funds into an ISA is the best way to invest tax efficiently with money that you can access at any time.

What do I do if I hit my target?

Once you’ve hit your target, you are technically ‘financially free’ and can live by withdrawing 4% of the money from your savings every year. Some people choose to give up work entirely at this point, and others simply downsize dramatically and go part-time.

It is important that you continue to keep an eye on your investment, however. James, at Vanguard, warns that it is possible to deplete your savings entirely by taking 4% from them.

He says that the 4% rule, which suggests you can take 4% from your investments every year and let the rest grow, was designed for investors with a 25-year time horizon.

‘A FIRE investor today, hoping to retire at 40, could be looking at a 50-year-plus retirement, meaning the 4% rule is likely to see them running out of cash too soon,’ he says. He says that early retirers taking 4% of income have a 64% chance of running out of money if they retire at 40.

‘Factor in the rising cost of living and the compounding of investment fees and charges and that figure reduces even further.’

The solutions to this are either to take less than 4% income, or to invest more, or to take on a part-time job to boost income — meaning you are only partially ‘financially free’.

These targets seem out of reach to me, is there any point in even trying?

Not everyone can achieve really early retirement with FIRE, particularly with bills rising as fast as they are at the moment.

However, there is a growing movement to embed these principles into less severe financial freedom programmes, so that savers can afford to downshift, go part time or make other lifestyle changes in later life.

FIRE Coast, for example, encourages people to save aggressively into pensions while young, amassing an amount that will then grow over time. This frees savers from pension contributions in later years.

Taking other steps such as paying off small chunks of your mortgage can help to push you towards your goal, even if you can’t save aggressively now, and may have a bigger impact than you think.

Recent figures according to Aviva found that taking these small steps are actually some of the biggest triggers that have allowed people to retire early.

Nearly a third of people surveyed by the insurer said that it was paying down the mortgage that helped them to retire, while 29% said ‘saving little and often’ made the difference.

‘The experiences of people who’ve already reached early retirement show that small savings habits, which add up over time, are every bit as important as big gestures such as putting aside any year-end bonus,’ says Alistair McQueen, head of savings and retirement at Aviva.

‘The turbulent times we’re living through have given many people pause for thought to consider their work-life balance and think more seriously about what makes them happy. Our findings suggest the dream of an early retirement is very much alive and kicking.’

Where can I go for more information?

Still fancy early retirement? There are several places you can go for more information on the FIRE movement.

The Mr Money Mustache website has been a jumping off point for many FIRE savers, while Alan Donegan, a British FIRE fan who tells his story below, has also written his own free FIRE course (see alandonegan.com).

Alan and Katie Donegan, aged 43 and 38, are already retired. Thanks to discovering the FIRE movement in 2014, they’ve amassed a pool of investments that, they believe, mean they will never have to work again.

The couple are currently in Puerto Vallarta, Mexico, and intend to continue with a lifestyle of ‘slow travel’, using the income they receive from their investments.

The couple were inspired to start saving for financial independence thanks to blogger Peter Adeney, who styles himself online as Mr Money Mustache, who heavily promotes the FIRE movement.

‘I read his whole back catalogue. I absolutely devoured it,’ says Katie. ‘It was like he was talking to me for months, and it shifted my mindset.’

Alan describes the concept of FIRE as ‘actually really simple’.

‘First, reduce your expenditure. If you can increase your income, which creates a gap between the two, you then take that gap and invest it into assets,’ he says

‘It’s not sexy. People think the way to being wealthy is either to be born into money, start a company, or win the lottery. That’s the only way normal people get wealthy. This is just slow and steady. It’s not like get rich quick and all these like things that.’

Katie and Alan began their journey by adjusting their expectations. Instead of buying the four-bedroom house and smart car that people expected them to have, they bought a small two-bedroom flat in Basingstoke.

‘People said, “When are you going to buy a proper home?”,’ says Alan, who was working as a landscaper, while Katie was an actuary.

Alan then founded his own business, The Rebel Business School, and the two continued to save money aggressively, putting their savings into cheap tracker funds to pay for early retirement.

‘We kept our base costs very low,’ Katie says. ‘Our biggest luxury was buying salmon.’

The couple lived in Basingstoke for ten years, saving as much as they could. However, they did not give up on the luxury of travelling and ensured they retained a social life, even if they did eat in rather than dining out.

‘We never felt like we were depriving ourselves, we would have friends round for dinner and like, our social life wasn’t affected by it.’

After ten years, they’d amassed investments worth £1.65million — which they believe will be enough to live on for the rest of their days. They sold the house in Basingstoke, and then started to travel.

‘At the moment, we wake up and we go for a run and a swim. And then we we have a few projects we work on. We go out for dinner and hike around the local area and we just do different things and have fun.’

Although their investments have been hit because of the war in Ukraine, the couple are confident they will hold out and keep paying an income.

‘It’s difficult to say currently exactly what we’ll be doing in the coming months but there is a definite plan to travel.

Their top advice for those starting out with the FIRE movement today is not to take frugality too far.

‘People miss weddings or do silly stuff, they get too obsessive,’ Alan says.

‘The idea is not to sacrifice happiness.

‘The goal of this whole thing is happiness.’

If you want more tips and tricks on saving money, as well as chat about cash and alerts on deals and discounts, join our Facebook Group, Money Pot.