Forget the oven, put your turkey on the BARBECUE this Christmas! Waitrose chef shares his guide to grilling a bird – from immersing it in brine to cooking the legs separately

With many people looking to celebrate Christmas in a different way this year, a top chef has unveiled his tips for cooking the perfect festive dinner outdoors.

While it may be far from traditional, high street supermarket Waitrose is predicting a spike in the number of households that will be cooking their Christmas turkey outside on the barbecue rather than conventionally in the oven.

Waitrose Executive Chef Martyn Lee revealed: ‘I cook my turkey on the barbecue every Christmas. It never fails to impress and I predict many will join me in doing the same this year.’

‘It’s really easy, quicker than if you were to cook it in the oven and gives a beautifully succulent taste with a crispy skin.

‘And it’s not just the turkey, you can cook the full Christmas feast on the barbecue – trimmings, desserts and all.’ 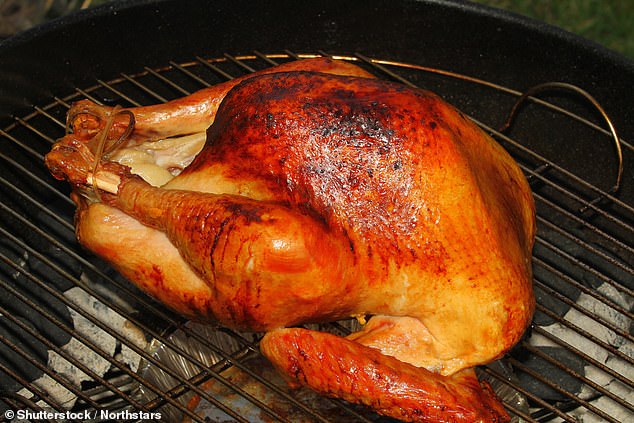 It comes as the supermarket giant revealed it has seen sales of turkeys increase by 280 per cent on last year and found 20 per cent of people are beginning their festive preparations earlier than ever before.

Here, Martyn tells FEMAIL exactly how to best cook up the perfect Christmas dinner on the BBQ…

1. It’s all about the brine

Martyn said that brining the turkey is an essential part of the process in getting your meat ready for the Christmas table.

He explained: ‘To get the very best flavour from your turkey, it’s all about the brine.

‘You need to fully immerse the turkey in the brine – with 80g of salt per litre of water – and then leave it for around 24 hours to properly marinate.

He added: ‘I use my dormant summer cool box for the task.’

Meanwhile he advised: ‘You then need to desalinate for an hour in fresh water before you take it over to the barbecue.’

Martyn revealed while most of the bird can be cooked on the grill outside, it’s still important to separate parts of the meat in order to get the best texture and flavour.

He explained: ‘I love to cook the whole bird on the barbecue because it gives everyone the option of white or dark meat.

‘However, I always remove the thighs and legs and cook them separately because the dark meat benefits from longer, slower cooking.

‘Cooking both at the same time means the white breast meat will overcook before the thighs and legs – leading to the dreaded dry turkey!’

He added: ‘If you prefer to focus on the turkey crown – or are planning for a smaller gathering – then this will cook beautifully too.’

While many might have experience cooking burgers or sausages on the barbeque in the summer, Martyn explained that grilling the festive bird would prove a different task.

He said: ‘Barbecuing a turkey calls for indirect heat – it’s very different to grilling a steak or burgers over hot coals.

‘The best way to do this is to stack coals along one side of the barbecue and the meat on the other side.

‘My tip would be to use foil to deflect the heat if necessary.’ 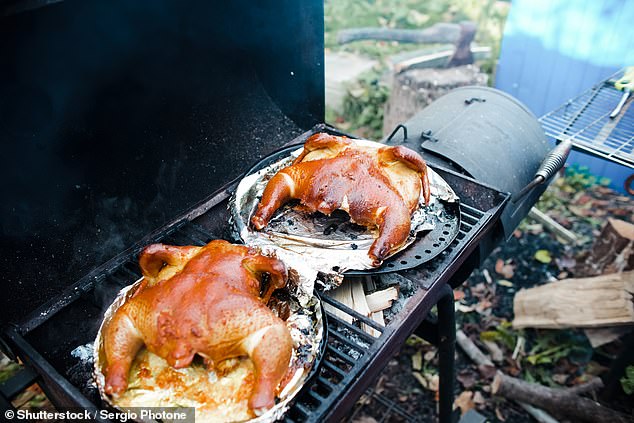 4. From roasties to La Ratte

And Martyn advised ditching the usual festive trimmings for different vegetables more well suited to the smokey flavours of the BBQ.

‘The unique nutty flavour combined with the smooth, buttery texture makes them the perfect side dish to bring out the flavours of the barbecued turkey.’

‘Simply dress them in olive oil before cooking to give them a deliciously crispy skin.’

For those of who won’t be eating turkey this Christmas, Martyn suggested popping a cauliflower onto the grill.

Martyn explained: ‘For a fabulous vegetarian dish – give the classic cauliflower cheese a smoky barbecued makeover.

‘Perfect as a main or side dish, barbecue a whole cauliflower in its leaves and dress it with a delicious mature cheddar sauce.

‘A homemade sauce is best, but if you’re short on time then pre-made can work just as well.’

He explained: ‘Don’t let the barbecue burn out once you’ve finished with the turkey and trimmings.

‘In recent months we’ve had people becoming more experimental with desserts on the barbecue – for a festive twist, cut a Christmas Pudding into slices and grill it on the barbecue to add a hint of caramelisation.’

He added: ‘Top each slice with brandy butter and allow it to melt for a delicious dessert that’s sure to be the perfect sweet ending to a Christmas dinner barbecue.’