The leader of the Victorian Nationals Party has called on the Andrews government not to cancel Melbourne’s Formula One grand prix in November, warning the state risks permanently losing the race.

Deputy Opposition Leader Peter Walsh said Victoria was already struggling to retain its mantle as Australia’s events capital after a coronavirus-hit 18 months and could surrender its grand prix rights if the event was cancelled for a second successive year. 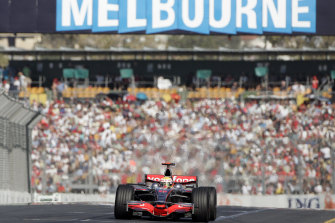 Melbourne has hosted the Formula One Grand Prix since 1996.Credit:AP

The Australian Grand Prix Corporation has put a proposal to the state government suggesting racing teams fly into a grand prix bubble, though a full two-week quarantine was not feasible because they would likely miss races in other countries.

The state government must decide by the end of the month whether the multimillion-dollar event will proceed as planned, after it was already delayed from March to November this year due to coronavirus restrictions.

Hundreds of F1 crew members would fly in from overseas for the race, a potential political risk considering national cabinet on Friday agreed to halve international arrivals for Australians overseas until more of the population gets vaccinated.

The bespoke quarantining of Australian Open players and crews in January also sparked some criticism when tens of thousands of Australian were still stuck overseas at the time.

Mr Walsh said he would like to see the grand prix go ahead and suggested rapid testing, like that used for attendees at last month’s G7 Summit in the United Kingdom, could be used to manage the risk.

“If we are going to be the events capital of Australia, as we want to be, we need to make sure there is actually certainty for industry, certainty for small businesses that provide catering to these particular events,” he said.

“There is the technology available to actually free up and have these sorts of events.”

Last year’s AFL grand final was moved to Brisbane because no crowds were allowed at the MCG, while Australia’s premier surfing event was moved from Bells Beach near Geelong to New South Wales this Easter.

Mr Walsh pointed out the Australian Grand Prix took place in Adelaide from its inauguration in 1985 until 1996 when then premier Jeff Kennett convinced Formula One to move it to Albert Park.

“I’m sure the Premier of South Australia would be probably salivating at the chance of actually pinching it back at the moment,” the Nationals leader said.

“I think all I can say really on that process is that we would be looking at the proposal and the mechanism, deciding whether we think there’s a significant public health risk to the community. And if there are risks, can they be minimised or eliminated or not?” he said.

“So no decision has been made on that. It’ll be an ongoing assessment, and it will also be dependent of course on what the risks are both internationally and locally.”

Fans were famously turned back at the gates of last year’s grand prix in what was the first major event cancelled due to growing COVID-19 cases in Melbourne.

Sports news, results and expert commentary. Sign up for our Sport newsletter.