Farm businesses will remain reliant on overseas workers to fill labour-intensive jobs despite the soaring unemployment rate, forecast to reach 9.25 per cent by the end of the year, the agriculture lobby says.

Agricultural industries are highly reliant on unskilled migrant labour, particularly backpackers employed under the Working Holiday Maker visa that supply between 20 and 60 per cent of the industry's workforce, depending on the commodity type. 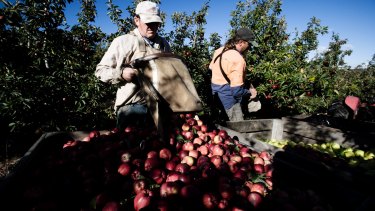 But it was unlikely Australia's increasingly educated workforce would fill jobs such as farm hand or fruit picker, Mr Rogers said, because the work was often short term, accommodation costs were a consideration and people often had responsibilities in their community like children, or rental contracts.

"In principle, there is no reason why a recently redundant waiter or baggage handler, chef or airline pilot shouldn't take up work picking mangos, driving harvesters, or cleaning shearing sheds," he said.

"However, the reality is that displaced Aussie workers may be reluctant to leave their homes and support networks in the cities and suburbs, to relocate to rural and regional Australia to perform physical demanding work from early in the mornings to late in the evening, perhaps to spend their nights sleeping in caravan parks or tents."

During the coronavirus pandemic the number of Working Holiday Makers had fallen from 140,000 to 80,000. The farm sector employs around 40,000 each year,

Mr Rogers said research showed that since the coronavirus pandemic five per cent of applicants to harvest jobs had come from Australians.

NFF's submission to the inquiry said the sector needed to maintain access to overseas workers despite coronavirus restrictions "to bridge workforce gaps".

The federal government is currently working on a pilot program to issue 200 visas to workers from Vanuatu to harvest mangoes in the Northern Territory under the Seasonal Worker Program and is considering issuing more visas to work in industries such as shearing and horticulture.

Agriculture Minister David Littleproud said last week Australians have not been willing to work in the farm sector, and he was working on plans with his colleagues to address worker shortages. 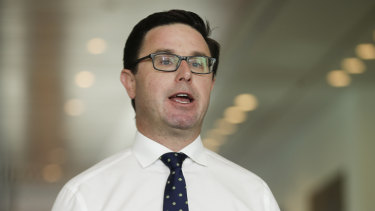 "Even when our social security payment for the dole was $550 a fortnight, we couldn't get people off the couch to go and pick fruit," Mr Littleproud said, adding that "it's a very hard incentive to get someone off the couch to travel a couple of thousand kilometres to pick fruit for six weeks, then turn around and come back".

A communique from last week's meeting of state and federal agriculture ministers said they were working together so the seasonal workforce could continue to move across borders and follow work around the country "while ensuring local employment options for Australians".

Australia's horticulture industry is a particularly large employer of Working Holiday Maker visa holders, often in packing sheds as the harvest rush rolls across the country.

A study by the University of Adelaide last year found horticulture workers were routinely exploited by employers, and in 2018 the Fair Work Ombudsman's report said 56 per cent of the 8000 horticulture farms with employees had underpaid workers by at least $1 million.

The NFF is calling for a dedicated agriculture visa, with provision for two streams – one for seasonal and unskilled workers valid for 12 months, including the right to return yearly as well as a longer-term category for skilled workers, such as stock handlers or farm managers.

Working Holiday visas are issued for up to 12 months to people from certain countries who are aged between 18 and 30 and commit to work for 88 days. If they work in tourism, hospitality or agriculture in Northern Australia for that time, they are eligible for a second year on their visa.