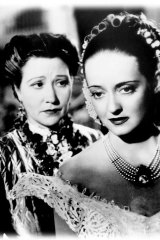 Bette Davis didn’t get to star in Gone With The Wind, but she did win an Oscar in a comparable role as a Southern belle who causes havoc by wearing the wrong colour dress to a ball. William Wyler’s 1938 melodrama marks the start of an era when Davis played rebellious women as no-one else could. Digitally projected. Astor, Sunday, December 1, 7pm. Double bill with Gaslight.

THE NIGHTMARE BEFORE CHRISTMAS (76 minutes) G

The skeleton king of Halloween Town (voiced by Chris Sarandon) strives to embrace the spirit of Christmas in this cheerfully morbid 1993 stop-motion animated fable for all ages, directed by Henry Selick (Coraline) from a story conceived by producer Tim Burton. Digitally projected. Astor, Sunday, December 1, 4.30pm.

Expertly constructed, Brad Bird’s 2018 follow-up to his original all-ages adventure about a superhero family combines thrillingly “impossible” action sequences with some thoughtful reflections on what we get from superhero stories in the first place. Digitally projected. Thornbury Picture House, Saturday, November 30, 11.30am. All tickets $12.

With Manhattan on lockdown, a trigger-happy cop (Chadwick Boseman) embarks on a chase through the night for the city’s two most wanted men (Stephan James and Taylor Kitsch). The first big-screen feature from TV director Brian Kirk (Games of Thrones), this modest but engaging thriller keeps even its improbabilities at a human scale. General.