Woman, 27, reveals horror after learning her long-distance boyfriend was cheating on dating apps – after one of her TikTok followers matched with him and sent her screenshots of evidence of their conversation

A woman found out her boyfriend was cheating on her after one of her avid TikTok fans matched with him on a dating app.

Meghan Wainwright, 27, from Toronto, Canada, went viral in October, when her TikTok explaining how she met her boyfriend Seth got 1.5million views.

Since then, she has accumulated a following on the platform of 138,000 people. who have kept an eye on their relationship, when she was next visiting him, and any romantic gestures she would share online.

However she was left horrified when a fan emailed her to explain she had matched with Seth on Hinge, before sharing screenshots of the messages exchanged between them.

She went on to upload five TikTok videos explaining the situation to her followers, which have accumulated over 1.4million views. 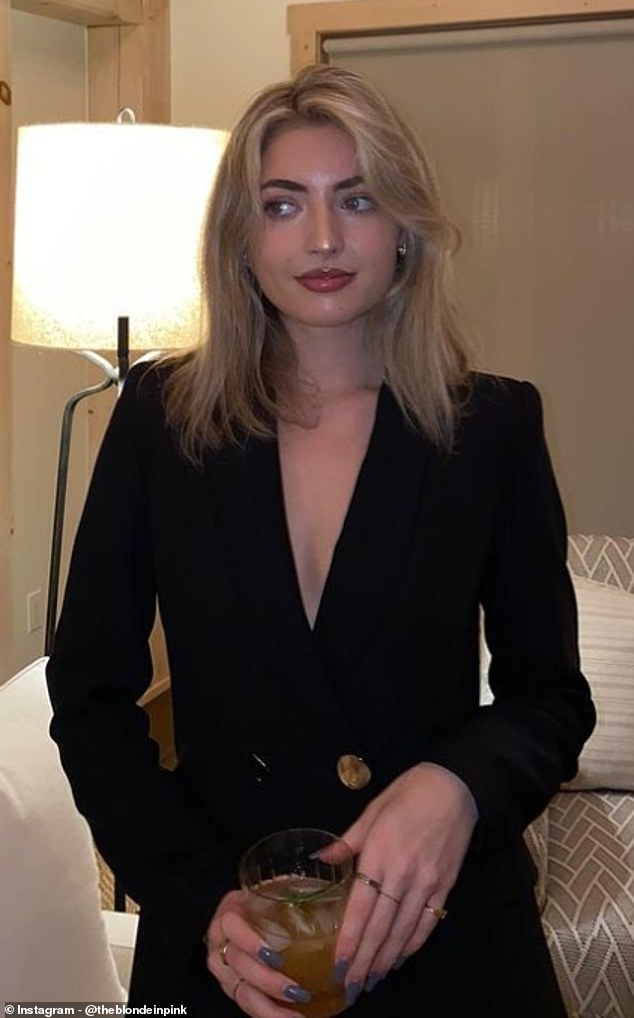 Meghan Wainwright, 27, from Toronto, found out her boyfriend was cheating on her after one of her avid TikTok fans matched with him on a dating app

Meghan was in bed with her boyfriend during a visit to his hometown of Chicago when she received an email from a stranger.

The email read: ‘Hi… I tried messaging you on Instagram earlier, but I don’t know if you would ever come across it given your following.

‘I’ve been following you on TikTok for quite a while, and I can’t say I wasn’t invested in your relationship. I looked him up, and I remember seeing him on dating sites a while back.

‘When I saw his profile tonight, I thought it was just a mistake. I liked his picture to see if there was any response to it, and there was. 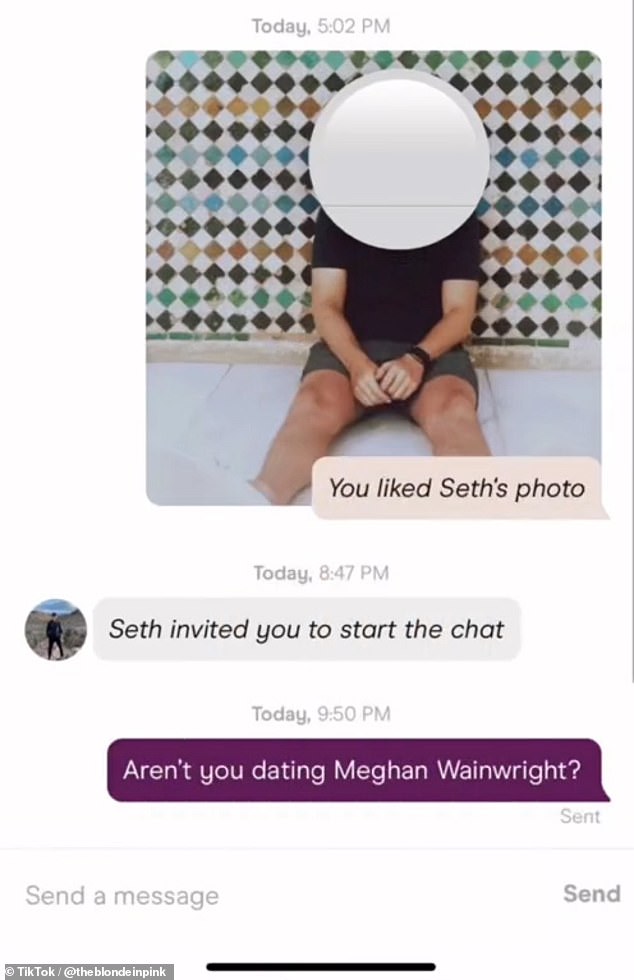 Meghan was sent this screenshot by a fan of her TikTok, after recognizing her boyfriend Seth on the dating app Hinge

‘I’m really hoping my investigative skills are completely wrong and this isn’t your boyfriend or if it is, I’m hoping this is a mistake somehow.’

The woman also attached a screenshot of his Hinge dating profile and their private chat, as well as a screen recording to ensure her that the picture was not tampered with.

In her first TikTok video explaining the story, Meghan said: ‘I’m like surely this is a mistake, I’m positive that there’s an explanation.

‘I say to him, I’m going to read this email out loud to you, and have you look at the screenshot, I just want you to react to it. 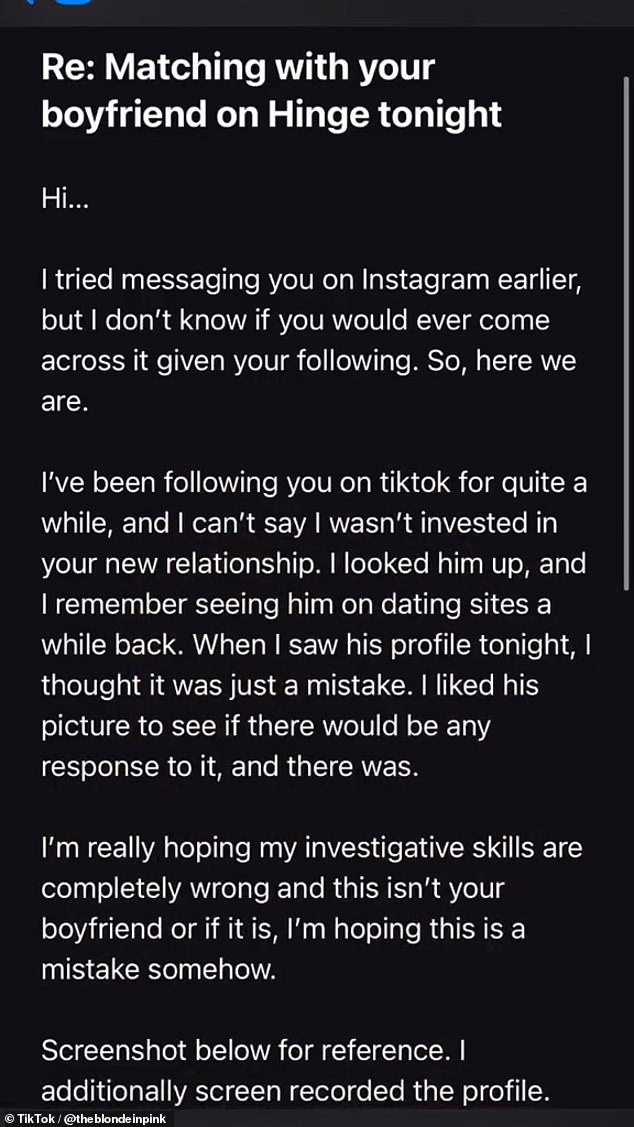 Along with the attached screenshot and a screen recording of his profile, the anonymous woman titled the email: ‘Matching with your boyfriend on Hinge tonight’ 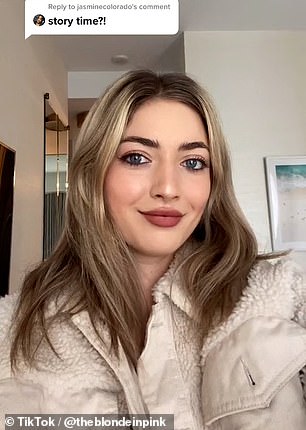 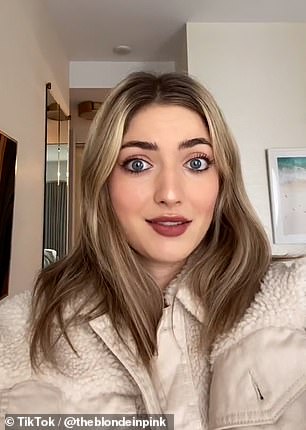 After making a 825km journey from Toronto to Chicago, Meghan was heartbroken to find out her boyfriend had been on dating apps while they were in a relationship

‘I read it out loud and I am waiting for the explanation but his reaction makes my heart immediately sink because I’m like, oh no, he’s lying.’

In response, he repeatedly said ‘I’m not on dating apps’, and then said ‘Baby you’re scaring me’ when Meghan told him she was looking at another direct message from a girl who found him on Hinge.

Meghan locked herself in the bathroom where she searched up how Hinge conversations work, to find out if the screenshots proved her boyfriend was active on the app that day – and sadly she found it to be true.

In a second part video, she said she wanted to see his phone – so she downloaded Hinge and another app Raya to see for herself.

‘I told him to unlock his phone and slide it under the door, which he does,’ Meghan said. 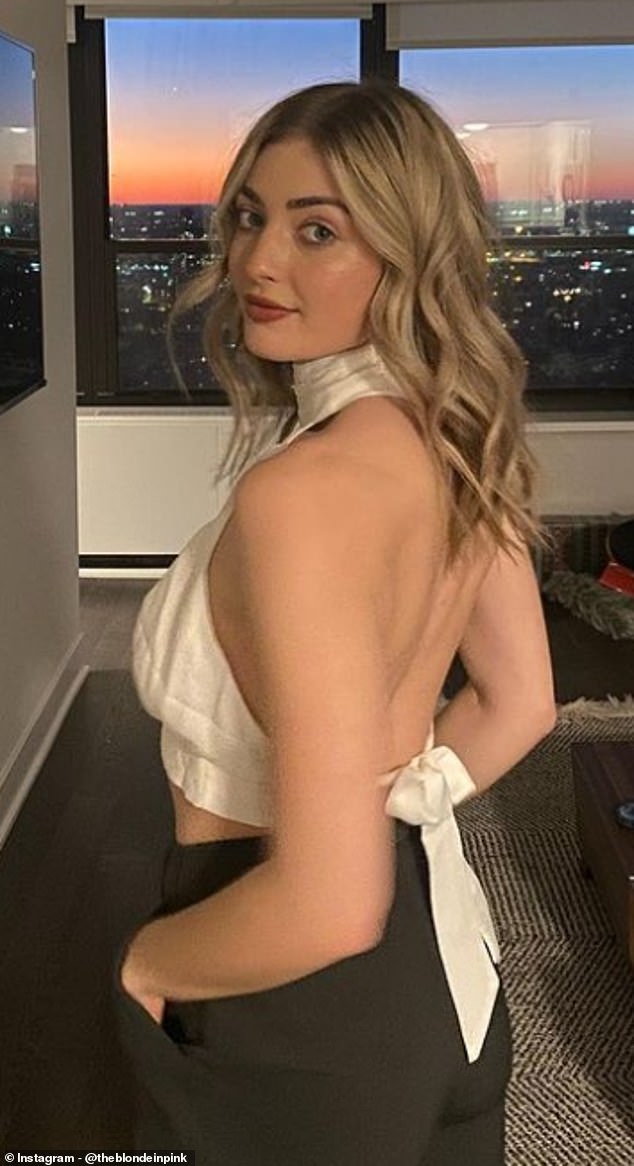 Meghan was in bed with her boyfriend when she first read the email, and said she had initially been convinced there had to be some kind of mistake

‘I went on the app store and check Hinge, it’s in the cloud, I redownload it, open up the app and it says “You have permanently banned from Hinge”.

‘And messages as early as the night before I left to make this trip to visit him for the holidays.

‘At this point I start taking videos to document, but also to record all of the s**t he is saying on the other side of the door.

‘Like at this point, I’ve caught him in the lie, I’m holding the evidence in my hands and he continues to just say, “I’m not on dating apps, I’ve deleted the dating apps, I’m in love with you, I’m all in on you, I would never cheat on you”.

‘There is literally a message from December 7 from a girl asking when are you coming to New York and you asked if there is a couch you could sleep on her couch, this is the night before I came into town.

Part three saw Meghan explain that the revelations happened on a Friday night, but her flight home was on Wednesday the following week. 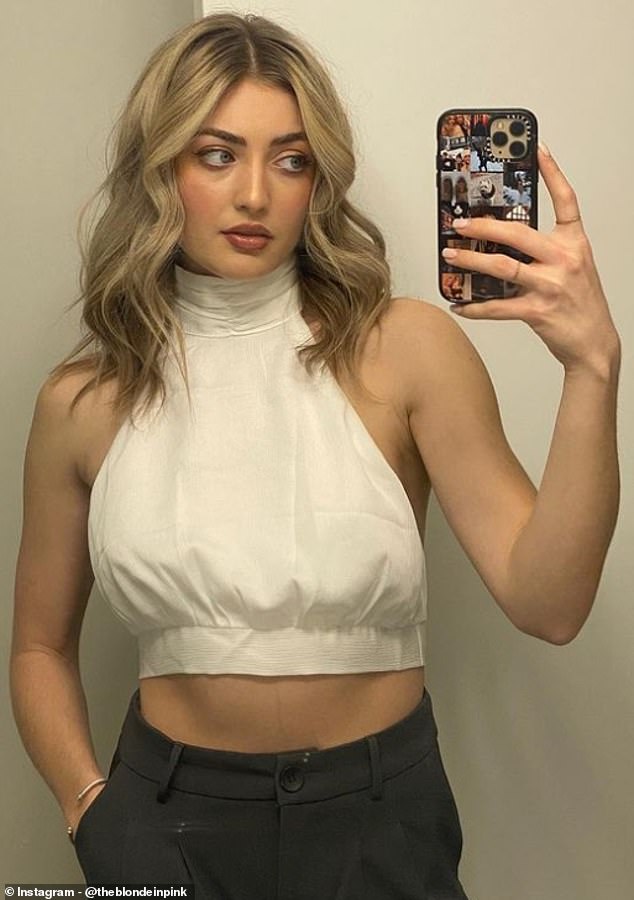 She locked herself in the bathroom to get some space and demanded to see the dating apps for herself, only to find ‘dozens and dozens’ of messages to girls

She said she called her sister to pack up her things while she organizes a hotel for her.

In the next video, Meghan said her now ex-boyfriend tried to get her to stay by telling her he had bought a diamond ring.

She said: ‘He’s like, “How could I be cheating on you, I stayed in on a Friday night doing your laundry’ and ‘I was hoping that tomorrow when we open our Christmas, presents my gift was really gonna show you how much I love you because I got you a diamond ring'”… How did I manage to attract this type of crazy?’

Fans invested in the relationship commented on her posts baffled by the entire situation, with one commenting: ‘I don’t get people who think they can sneakily have dating profiles as if women won’t go above and beyond to let another woman know.’

A third wrote: ‘Isn’t it hilarious when you literally have a screen recording of the profile and they still swear it’s not them??’ 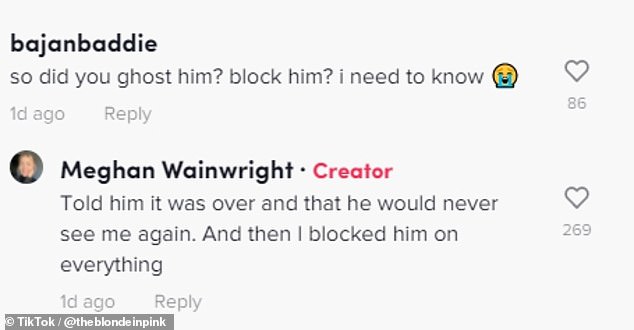 Many TikTok users were left shocked by the story, with some praising Meghan for blocking her boyfriend