There was a knock on the door: a different kind of knock. Not the usual courier-driver knock: that loud impatient “CLONK CLONK, quick, I’m carrying 300 kilos of online clothes that you’ve been eagerly waiting for, all of which you’ll be returning first thing tomorrow morning. Hurry, open the %$#@ door!”. Not the familiar salesperson-knock: that timid tired “TAPPITY-TAP, I am a poorly-commissioned Belgian backpacker flogging a dodgy eco-lightbulb scheme that nobody’s heard of, slam the door in my face, I don’t mind, I’ll be back tomorrow with chimney-balloons”. 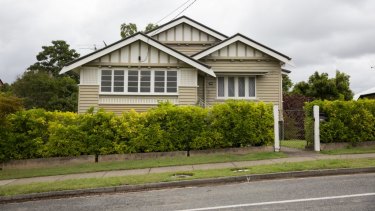 The moment he stepped into the house, Jeff got emotional.

This was a friendly, old-fashioned KNOCKA KNOCKA, and I thought, hmmm, why’s a friend popping around in the middle of a working day? And when has a friend ever popped round on any day? Intrigued, I opened the door and a stranger was standing there: not a friend, not a courier, not a dodgy salesperson with an I.D. made from clingwrap and staples. Just a pleasant-looking older man, maybe in his 70s. He said, “Hi, my name’s Jeff and I was just driving past so I thought I’d see if anyone was home. I actually used to live in this house when I was a kid in the 1940s and I have lots of happy memories here.” I said, “Well, why don’t you come inside and have a look around! Please, Jeff, I insist!” While in my head, I thought, “He’s a burglar for sure. This is his home-entry ploy. He’ll come inside and rob me. Maybe kill me and drag my body out to his car then bury me in rural woodlands. But you know what? It’s an ingenious ploy. He’s earned it.”

The moment he stepped into the house, Jeff got emotional. He peeked into the living room and said, “Hey, that’s where we had the piano! … that’s the corner where dad used to sit! …  those are the windows we blacked out during the war!” And I listened and nodded and smiled, but in my head, I was thinking, “Danny, you left your wallet on the coffee table … just casually walk over and nudge it behind the vase … quick, before he sees it!” Jeff wandered around the house for 10 minutes, then he said, “If it’s not asking too much, could I bring my two sisters around sometime next week? They’d love to share this experience.” And I said, “Of course, Jeff! Bring your sisters! I insist!” But in my head I was thinking, “Ahhhh, he needs help carrying my body to the car. He’s got a criminal syndicate. Impressive!”

A week later, there was another friendly KNOCKA KNOCKA. Jeff was back with his two charming Sister-Accomplices. He also brought some old black and white photos of the house in the 1940s. A photo of the front of the house with an old rusty jalopy parked in the driveway, not that much rustier than our 2007 Subaru. And a photo of Jeff and his sisters when they were little kids, posing in the backyard – which I got them to recreate, 70 years on, posing in exactly the same spot, my stripey undies hanging on a clothesline behind Jeff’s head. For two hours Jeff and his sisters reminisced about the house and I soaked it all up – it was nice knowing the place had such a happy history of love and laughter. We hugged, promised to stay in touch, and they headed off. I closed the door, sighed, then went and got my wallet out of a sock hidden up the back of my sock drawer. Maybe a tad overcautious.

Danny Katz is a Melbourne humorist.