Walking onto the stage of the Late Show with Stephen Colbert for his final interview promoting his memoir, Spare, the Duke of Sussex was given a grand entrance fit for a prince.

Harry was greeted by an adoring crowd chanting his name, before the Prince joked about whether he should sit in the chair next to Colbert, or the spare chair. It’s safe to say that if the United Kingdom doesn’t want him, Harry is very much at home in the United States of America. 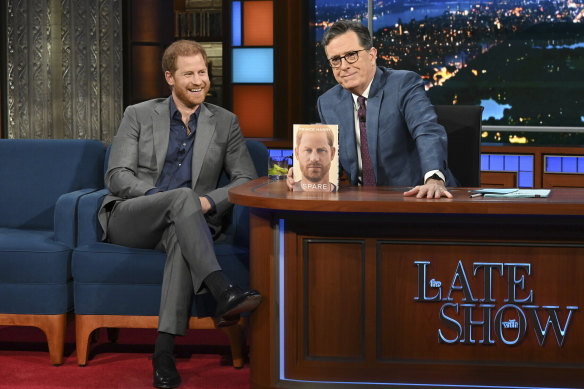 Prince Harry went on the Late Show with Stephen Colbert for his final interview promoting Spare.Credit:CBS/AP

Colbert introduced Harry as a “husband, father, military veteran and activist”, who has “three dogs, two kids and lives in Southern California”.

After a series of high-profile interviews promoting the book, the Prince was ready to wind-up his book tour with a tequila in hand and a crowd of Meghan Markle-loving Americans.

“Writing this book has been a cathartic experience for me. Hard times, and happy times. Bringing up old memories that I didn’t think I had,” Harry said.

However, the Prince was quick to call out the British media for cherry-picking which parts of the leaked memoir would make it into the news.

“Without doubt the most dangerous lie that they have told is that I somehow boasted about the number of people that I killed in Afghanistan,” Harry said.

“If I heard anybody else, if I heard anyone, boasting about that kind of thing, I would be angry. But it’s a lie. And hopefully, now that the book is out, people will be able to see the context. And it’s really troubling and disturbing that they [British press] can get away with it….My words are not dangerous, but the spin of my words are very dangerous.” 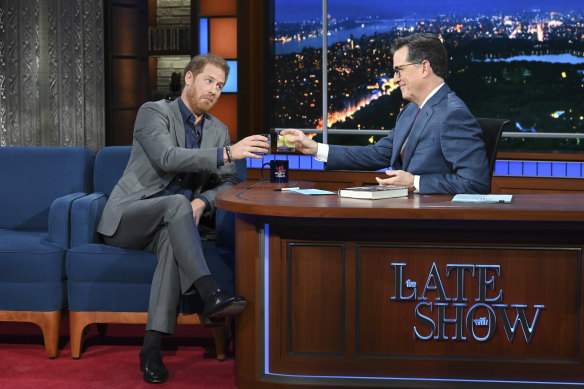 Colbert makes Harry a cocktail with tequila in it before they talk about Spare.Credit:CBS/AP

The Prince has copped criticism from people unsettled by the details of his Afghanistan deployment in his memoir, but told Colbert that he included it in his memoir to help prevent veteran suicides.

“I made a choice to share it because, having spent nearly two decades working with veterans, all around the world, I think the most important thing is to be honest, and give space to others, to be able to share their experiences without any shame. And, my whole goal and my attempt with sharing that detail is to reduce the number of [veteran] suicides.”

Harry has previously spoken about preventing veteran suicide and is a champion of The Invictus Games, a sporting competition that supports the recovery of wounded, injured and sick military personnel.

The Prince also took the time to draw similarities between what he and his wife have experienced, and the experiences of his mother, speaking about how the press and sections of the royal family drove them apart.

“Actually, our mere existence outside of that institutional control was more of a threat. It was a similar thing that happened to my mum as well,” Harry said.

“And they always knew that my wife was going to leave because of the way that they were abusing her, but I think the most embarrassing thing was that I decided to leave with her.”

In the first of his interviews for Spare on ITV and UBS, Harry spoke at lengths about his mother, Princess Diana, and the way the media obsessed over her until her death in a car accident in Paris in 1997.

However, Harry said that despite feeling like he and his family had been chased out of his home country, he had found refuge in the US.

“We have created a fantastic life here in California, which is by the way beautiful, and America is a great place to live.”