Any Australian music artist angling to be the ultimate rags-to-riches success story of 2019 best pack up their instrument now and head home: nothing is going to top the astonishing trajectory of 26-year-old former busker Toni Watson, aka Tones and I. 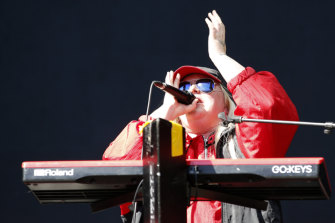 Goose-bump inducing pop star: Tones and I. Pictured here at Splendour in the Grass.Credit:AAP

Last year Watson quit a retail job to move to Byron Bay, where she lived out of a van and wowed crowds with her considerable busking skills.

A mere 12 months later and the Mornington Peninsula native’s triple-platinum single Dance Monkey is No.1 in 11 countries, has amassed more than 200 million streams and is currently equalling the record for an Australian artist holding the top spot on the ARIA singles chart, at nine consecutive weeks.

Bounding onto the stage in her usual low-key hoodie and baseball cap, a day after performing at the AFL Grand Final, Watson presents herself as the epitome of an anti-cookie-cutter pop star. 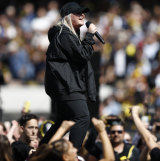 Relying on nothing but herself and a no-frills synth rig, Watson wastes no time in proving to the crowd what all the fuss is about, with a meditative new song that highlights her powerhouse, goosebump-inducing voice.

The eager audience goes spare for the half-dozen tracks from Watson’s recent debut EP The Kids Are Coming, each song scoring a rabid response and enthusiastic singalong.

New songs, an old song and a few covers that don’t quite match the EP tracks pad out the set – a cover of Alphaville’s Forever Young fares well; Flume and Chet Faker’s Drop the Game less so – but it’s Dance Monkey that unsurprisingly gets the night’s biggest reaction.

Watson is a charming stage presence, at one point recounting how she played in a smaller room at this venue a few months ago to a hundred or so people, imagining how amazing it would be to get to perform in the packed-out space she finds herself in on this night.

After experiencing her stellar voice and well-crafted pop earworms, it’s not a stretch to imagine her playing considerably bigger venues in the not-too-distant future.

Tones and I plays a second Sydney show at the Oxford Art Factory on Monday September 30.