Is there anything more political than choosing your baby's godparents? You are guaranteed to upset a sibling or an old pal who had assumed themselves a shoo-in, or find yourself begrudgingly picking that friend you haven't seen for five years just because they previously made you godmother to little Arabella. 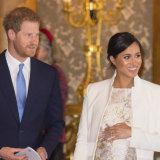 ‘The Sussexes’ are expecting their first child next month … which means they are in prime ‘choosing the godparents’ territory right now,Credit:PA

Imagine, then, that you are the Duke and Duchess of Sussex, with a minefield of royal relations and celebrity chums to navigate. What if Oprah already has her hat picked out, but finds she's been pipped to the post by Lady Louise? The Sussexes could create a minor international incident with their choices.

It is, insiders say, very hard to call who Meghan and Harry might ask to be spiritual guides for their firstborn. Their circle is said to have evolved somewhat in recent months, meaning the usual contingent of old school pals you might once have predicted the Duke would choose, could well be eschewed in favour of the new friendships they have forged as a couple.

Unlike the Duke and Duchess of Cambridge's picks – a fairly predictable mix of family, and friends known to have been in their inner circle since St Andrews – it remains to be seen who really features in the Sussex set these days.

"I'm a bit baffled about their friendship group at the moment," says one insider. "I keep hearing that they're not seeing much of his old mates."

The invite list to their wedding is thought to be the clearest indication yet as to the status of their inner circle. Two camps emerged from that day in May 2018: the gang of army chums and Sloane rangers from Harry's youth, and a baffling hotchpotch of fashionistas and Hollywood elite. Will their godparent choices draw from both sides of the aisle?

"Are they going to go with the celeb group, like at the evening party of their wedding, or the super-traditional group?" muses one source. "I would have said Tom Inskip [Harry's former right-hand man and Eton schoolmate] would be right up there. He did the speech at the tea. But there was that whole thing where he wasn't invited to the evening do…"

"It's a really tricky one," says another insider. "I think she'll go for some grandees and he'll go for a few solid friends, if he's still interested. But I think it will be Meghan's choice, frankly, as with everything."

With just a few weeks to go before baby Sussex makes their appearance, let's take a look at the runners and riders for godparent-in-waiting … 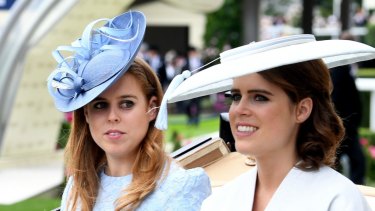 Princess Beatrice (left) and Eugenie (right), in with a chance.Credit:AP

Harry has just been made godfather to Lena Elizabeth Tindall, Zara's second daughter, so it would follow that he might return the favour and make his cousin – with whom he has always seemed to share a special bond – godmother to his firstborn. Although Zara is already godmother to Prince George, so perhaps Princess Beatrice or Eugenie could be in with a chance? Eugenie and Meghan are said to get on well (she was reportedly the first member of the family to meet her), and share mutual friends in the Clooneys.

Then again, some people choose to go down the generations, picking the child of their own godparents for their baby. Harry's godmother is Lady Sarah Chatto, Princess Margaret's daughter, so could one of her sons – 20-year-old Arthur or 22-year-old Sam – be in with a chance? One thing seems pretty clear, after the great Markle Debacle of 2018, the Californian contingent seem unlikely to be getting a look in.

Jessica Mulroney, high priestess of Meghan's circle, seems like a safe bet having played a significant role in the royal relationship. Canadian stylist Mulroney and her husband Ben were said to have hosted countless secret dinners for the pair in Toronto, when they were first dating. She then became Meghan's unofficial wedding planner, while her three children were in the bridal party. She even flew to Australia last year to help support Meghan on her first official royal tour, where the Duchess announced her pregnancy.

Benita Litt could also be in with a shout. A childhood friend of Meghan's, her daughters Remi and Rylan were bridesmaids and the Duchess is their godmother.

Markus Anderson, the Canadian confidant and Soho House director who is also said to have been instrumental in the Sussexes early romance, could be godfather. He is said to have been by the Duchess's side at her lavish New York baby shower. Meghan once gushed about him on her now defunct blog The Tig: "What would I do without you? I know what… I would be bored, and life would be infinitely less interesting. I love you SO much."

Some people choose to go down the generations, picking the child of their own godparents for their baby.

The prince's mentor Mark Dyer is thought to be a likely choice for godfather. Former equerry to Prince Charles, Captain Dyer has steadily guided Harry over the years. When he married Amanda Kline, in 2010, Harry served as an usher, while their son Jasper – also Harry's godson – was a page boy.

Jake Warren, whose daughter Zalie – another of Harry's godchildren – was the youngest bridesmaid at the wedding, could also be a good bet. Warren was godson to Princess Diana, and has always been close to Harry.

Or could one of his old Eton chums make the list?

Tom "Skippy" Inskip would normally have been a shoo-in. He was with Harry on that infamous Las Vegas trip in 2012,. He would certainly have stories to tell Baby Sussex about Papa's former antics… 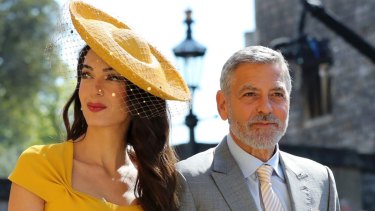 Amal Clooney and George Clooney are said to be in the running to be the two of the world’s most high profile ‘spiritual guides’ to the latest royal baby.Credit:GARETH FULLER

The couple move in some pretty starry transatlantic circles these days, with Wimbledon champions and Hollywood actors in their midst. The pews in St George's Chapel were a sight to behold last May, when Oprah, Serena Williams and the Clooneys sat opposite the Windsors. Actor George recently scoffed at the idea that he could be godfather, saying: "Oh yes, I'll be godfather of the royals apparently," before laughing and following up with a quick "No!" But his wife Amal could make the cut. The human rights lawyer helped the Duchess celebrate her baby shower, and is said to have provided the private jet for her flight to London.

Or could tennis superstar Serena Williams ace it? She and Meghan have been close for years, with Williams stating in a recent interview that they "really kind of are relying on each other a lot recently". Could the sporting powerhouse be the perfect role model?

One thing seems almost certain – whoever the couple choose, they will be able to offer baby Sussex a lot more than afternoon teas in the chilly corridors of Britain's stately homes.