“I was a big fan of seeing the insides of other people’s houses, especially people who were slightly famous like Melissa,” Frances, narrator of Sally Rooney’s Conversations with Friends, says early on in the novel.

Homeownership is a remote concept for Frances, a millennial college student in Dublin who writes and performs spoken-word poetry. She’s used to sharing a flat with a roommate and not interested in making a lot of money. But when she finds herself romantically entangled with Melissa and her husband, Nick, their tasteful material life becomes an object of infatuation. 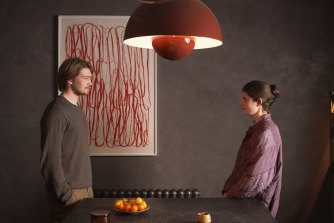 In the new Hulu series based on the book, the seaside Victorian belonging to Nick (played by Joe Alwyn) and Melissa (Jemima Kirke) doesn’t disappoint. The interior walls, made of a textured concretelike material, are a moody grey-blue, and the space is dotted with sprays of eucalyptus, Irish-made ceramics, sheepskin throws and large, artistic light fixtures.

The dining nook seems pulled from the pages of a recent Architectural Digest: a plant-filled space with weathered white-brick walls and several doors made of large glass panes set in rectangular steel frames, leading to a courtyard.

“Your house is very cool,” Frances (Alison Oliver) says over dinner. Bobbi, Frances’ charismatic best friend and ex (Sasha Lane), says: “I love it. You two are such grown-ups.”

Buying a home remains a “symbol of being an adult,” said Dak Kopec, a professor in the school of architecture at the University of Nevada, Las Vegas, who specialises in environmental psychology. But millennials – saddled by student debt and slow to marry or have children – have entered the real estate market more gradually than earlier generations, and the ones now ready to buy are finding low supply and soaring prices. It’s no wonder they’ve become HGTV-devouring, Zillow-surfing daydreamers.

Buying a home remains a “symbol of being an adult.”

Nick and Melissa – who probably considers herself part of the cuspy “Xennial” generation – have achieved the dream of homeownership that eludes many millennials. And the show turns their dwelling into a symbol of anxiety and aspiration.

Home decorating has a way of illuminating the gulf between the life you want and the life you have, or the one that you can afford. You may find yourself staring down impossible questions about what your days will look like in two, five or 10 years.

“I’ve heard so many couples fight over big rug purchases,” said Aelfie Oudghiri, 36, founder and creative director of Aelfie, a home decor brand. “It’s this defining feature of their home that’s supposed to indicate what kind of people they are and what kind of future they want to have.” She sees another kind of anxiety crop up in single people: “They don’t want to commit to something because they don’t know if their future hypothetical partner will like it.”

For Frances, Melissa’s home – and according to Anna Rackard, production designer, “it always felt like we were decorating for Melissa,” rather than Nick – is deeply appealing, despite her outward dismissiveness of the bourgeois lifestyle that it signifies. (Her evident embarrassment when Bobbi tells Nick and Melissa that “Frances is a communist” suggests that her dedication to this ideology isn’t terribly fixed.)

Melissa’s spacious office, which Frances peers into while briefly unattended, is littered with books. To a young writer accustomed to working from her bedroom, it’s heaven.

For Rackard and Sophie Phillips, set decorator, the goal was to create a version of a wealthy person’s house that wouldn’t repulse Frances – that, instead, she’d find cool and aspirational. To make the space feel younger and less fussy, they used plywood for the kitchen doors and decorated the walls with prints and photographs, rather than paintings. Phillips and Rackard wanted a spare but slightly rock ‘n’ roll look, with furniture and home goods that would make a strong statement on their own.

Rackard and Phillips see Melissa as someone who is “effortlessly cool,” who has an instinctive sense of style when it comes to putting together a home. But in her considered approach to setting a table with matching coloured glassware and bowllike plates, as she does for Frances and Bobbi, you could also read fastidiousness or insecurity.

“Melissa is slightly intimidated by Frances, in a way, by her beauty and youth and where she is in this stage of her life, which enables her to be quite carefree,” Phillips said. “Melissa is at the stage where she’s thinking, ‘Where am I going?’ It makes her very self-conscious in her decisions, to create this ‘perfect’ environment.” 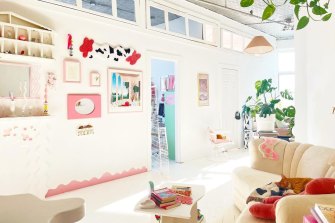 “Millennial aesthetic” is characterised by bright blocks of colour, zany rugs and groovy, selfie-friendly mirrors that are often used to make a statement on social media.Credit:@_sophiecolle

For people in their 20s and 30s, the desire to be seen accurately through design choices may be heightened, and perhaps warped, by the desire to perform our style for the public on social media. “Our homes started to look more and more like sets,” Oudghiri said, noting that bright blocks of colour, zany rugs and groovy, selfie-friendly mirrors are often used to make a statement on social media. The soft, unchallenging look known as the “millennial aesthetic,” heavily marketed as a signifier of good taste, often crops up in these spaces. Among young men, the Eames lounger has become a status symbol akin to hard-to-find streetwear, telegraphing success to the outside world.

Melissa’s muted house doesn’t seem to contain any terrazzo or pastel pink, but it does hit certain design trends that have received the millennial seal of approval. Rebecca Atwood, a 37-year-old artist and textile designer, identified a few: enveloping wall colour (that moody grey), goods purchased from brands and makers with a story (those Irish ceramics), an indoor-outdoor feeling (the greenhouselike dining nook). Rackard noted that the conservatory’s fashionable glass doors, while perfect for the warm weather of Los Angeles, would be uncommon in Dublin, where double-paneled windows are more suited to the climate. Such is Melissa’s commitment to style, to what people think.