No snowflakes here! TV shepherdess and mother-of-nine who bemoaned children who can’t do anything for themselves shares snaps of her own hardy brood keeping busy with farm chores and bracing mountain walks

Our Yorkshire Farm’s Amanda Owen hit the headlines yesterday after she blamed parents for today’s ‘snowflake’ generation of youngsters who cannot look after themselves.

The Huddersfield-born shepherdess, 46, lives at Ravenseat farm in the Yorkshire Dales with her husband Clive, 67, and their nine children, who range in age between 2 and 19.

The low-key TV star lives and works in the 2,000 acre property after moving to the land in 1996 to train as a shepherdess, and has penned two bestselling books about her life on the farm.

Between she and Clive, the nine children — Raven, 19, Reuben, 17, Miles, 15, Edith, 12, Violet, ten, Sidney, nine, Annas, seven, Clementine, five, and four-year-old Nancy — can cook, clean, change tractor wheels, deliver lambs, light fires, negotiate waterfalls and do all manner of things that most children, these days, tend not to be able to do.

But how does exactly does the mother-of-nine juggle her TV show commitments, jobs on the farm AND raising her huge brood? FEMAIL investigates… 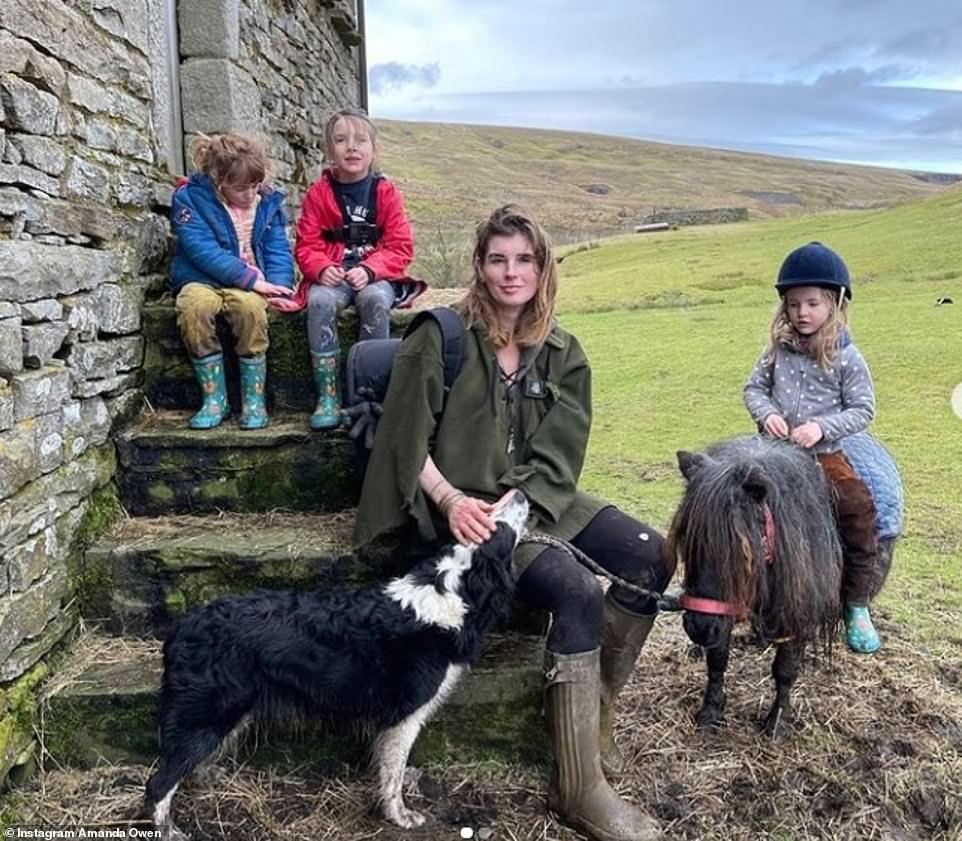 Our Yorkshire Farm’s Amanda Owen hit the headlines yesterday after she blamed parents for today’s ‘snowflake’ generation of youngsters who cannot look after themselves – but how does she raise her own kids? 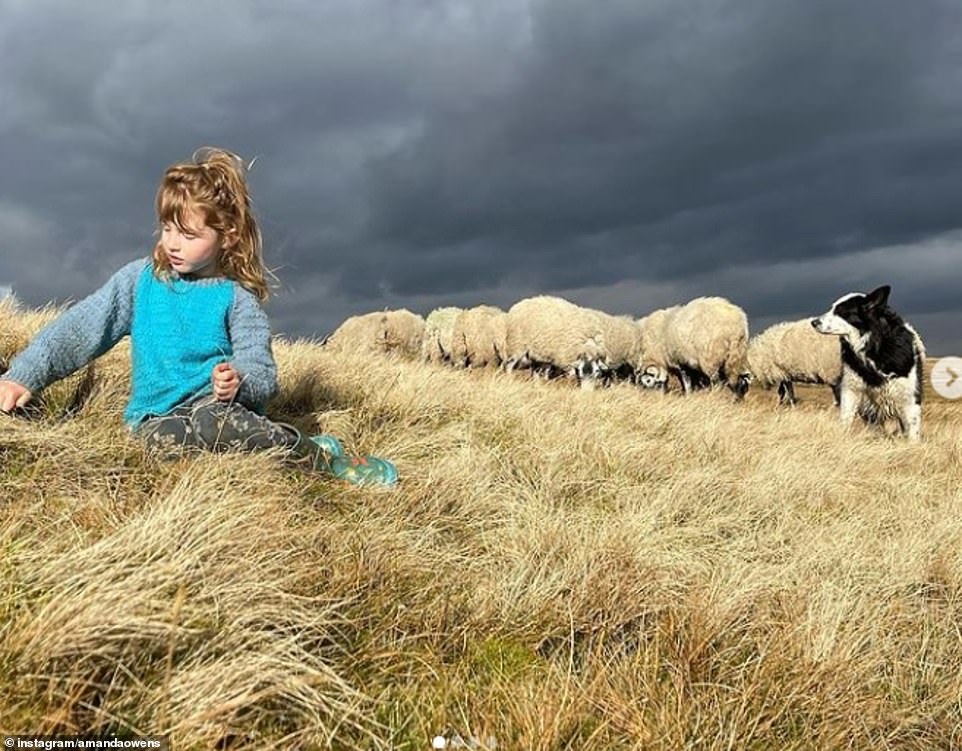 Amanda’s nine children are encouraged to explore the great outdoors, develop independence and help out around the farm  (pictured, Amanda’s daughter Kate in the field) 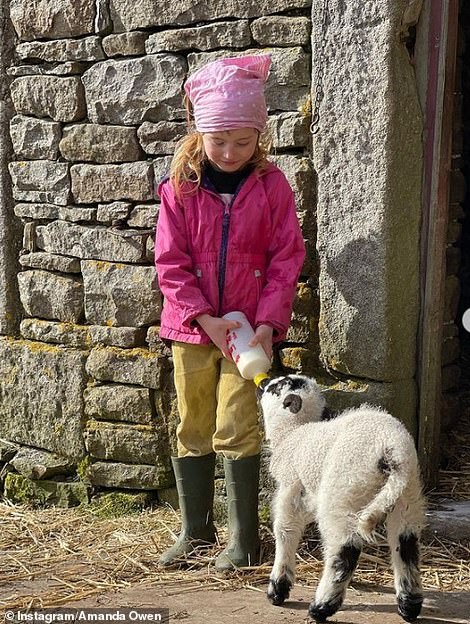 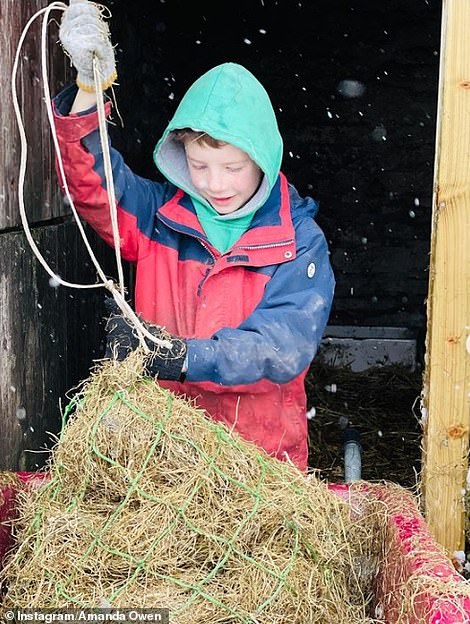 Even the youngest of the nine kids help out around the farm with chores, including feeding lambs (left, Nancy) and untying hay bales (right Sid) 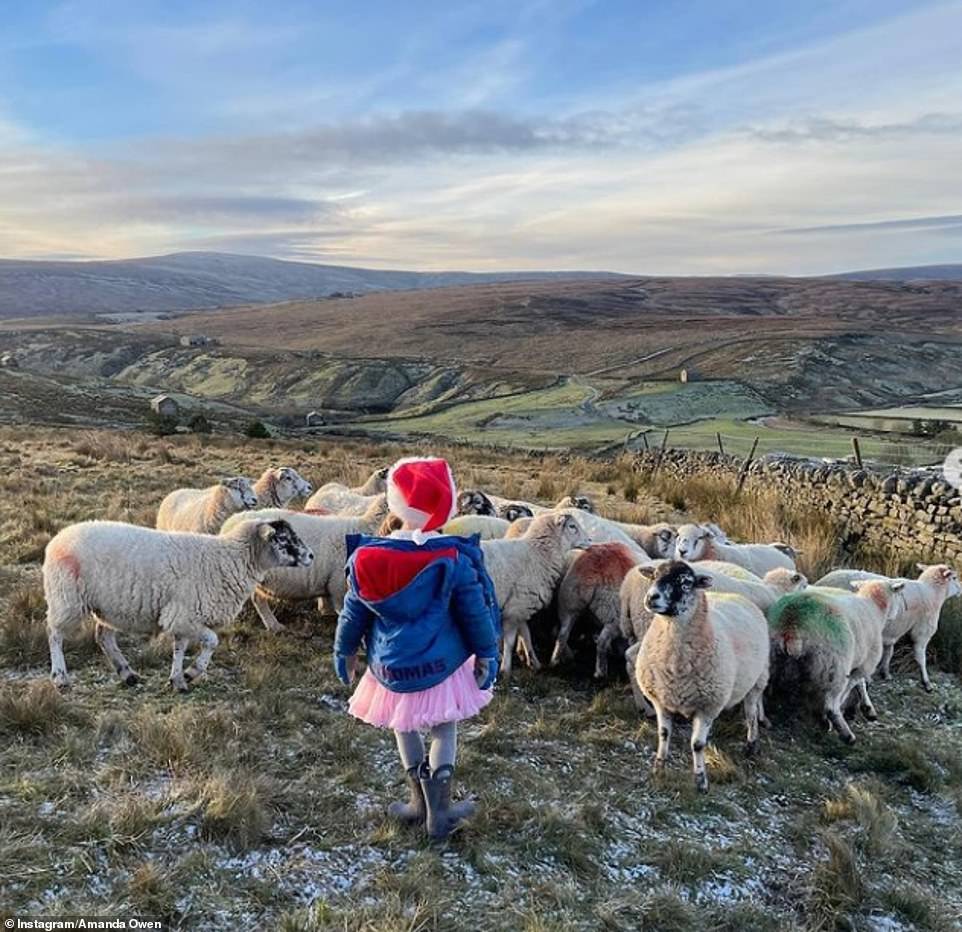 The mother-of-nine, who lives in a remote farm in the Yorkshire Dales, encourages her children to be independent

Owen met her husband in 1996 when he was already divorced with two children, after she arrived at his farm as a 21-year-old trainee shepherdess. They quickly fell in love despite the age gap.

Since marrying in 2000, they have had seven children together.

By the time she came to deliver daughter Clemmy, now five, she had already decided she could handle the incredible task on her own.

‘Our local maternity hospital is in Middlesbrough, which is 69 miles away, and on these roads, that takes a long time. So by baby number eight, I thought sod it, I’ll do it myself.

‘I knew the baby was in the right position, so when I felt the familiar feelings I went downstairs and had the baby in front of the fire with my terrier as a birthing partner.’

She added: ‘Clive wasn’t desperate to be at the birth, he was asleep upstairs. I went and woke him up with the baby.’

Embracing life in the countryside 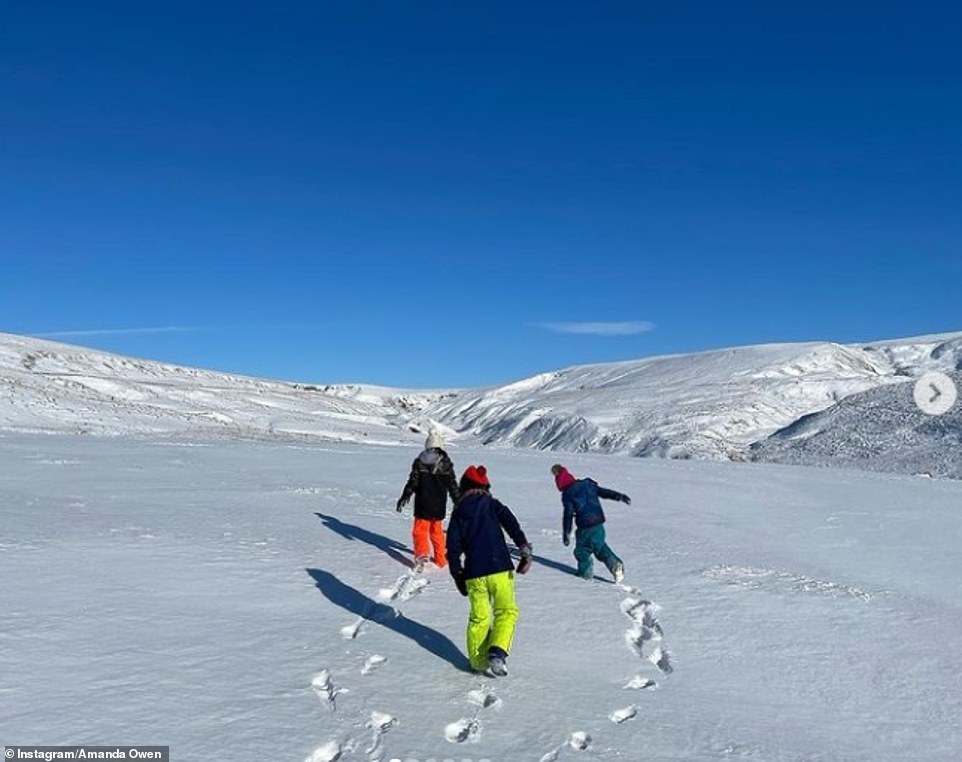 No matter the weather, Amanda often posts photographs of her children exploring the great outdoors 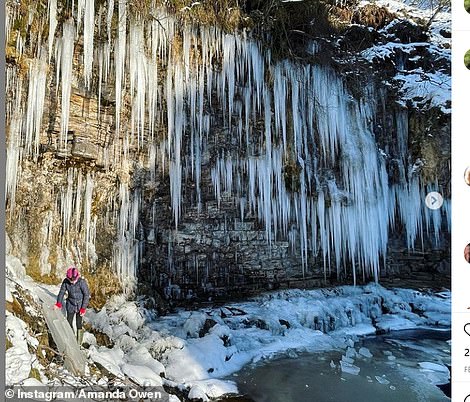 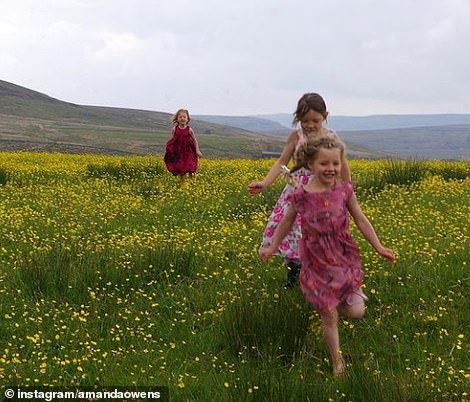 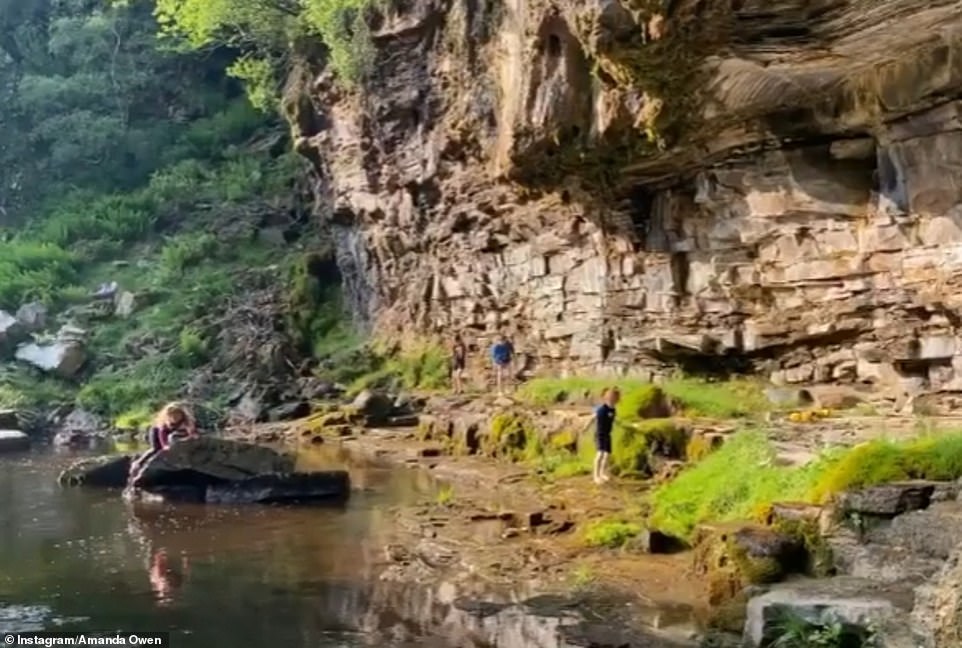 Last summer, the mother-of-nine shared videos of her children clambering over rocks as they explored a nearby river

The couple and their nine children live at Ravenseat farm in the Yorkshire Dales, a 2,000 acre working farm, located in Upper Swaledale, North Yorkshire, about an hour’s walk west of Keld.

The family make the most of the stunning environment and don’t even let poor weather deter them from their adventures.

Throughout the winter months, Amanda regularly shares snaps of the children wrapped up in hats and scarves as they play in the snow and head out for hikes in the stunning landscape.

Meanwhile the family also make the most of the environment in the summer months, running through fields of flowers and exploring waterfalls and canyons in the local area.

Chores around the farm 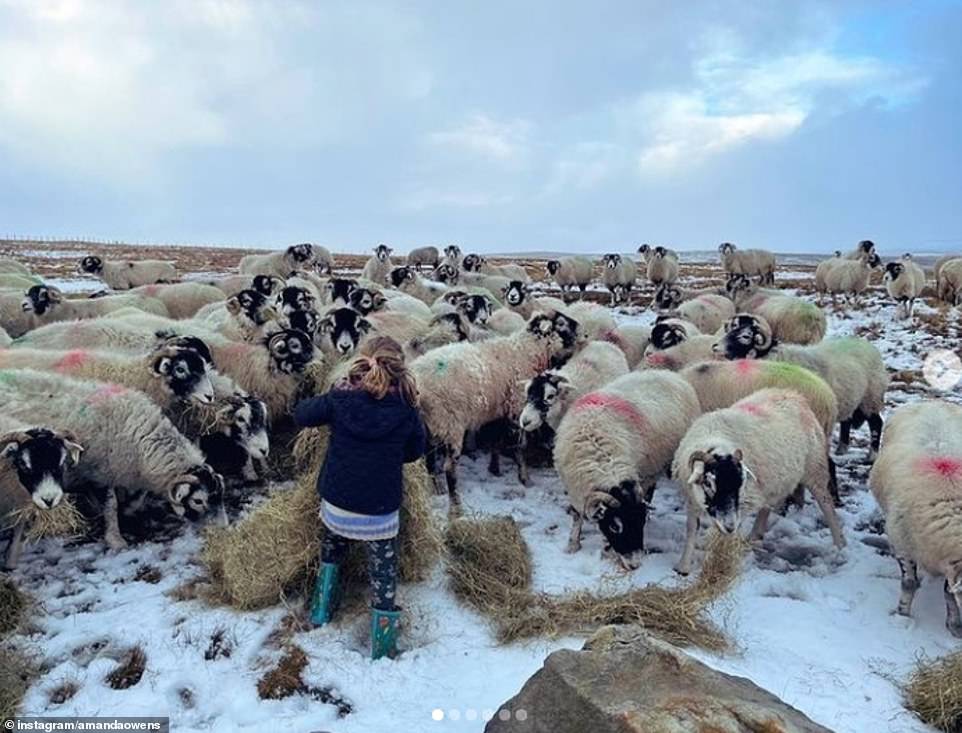 Even in the winter months the children are required to help out around the farm with chores and looking after the 1,000 flock of sheep 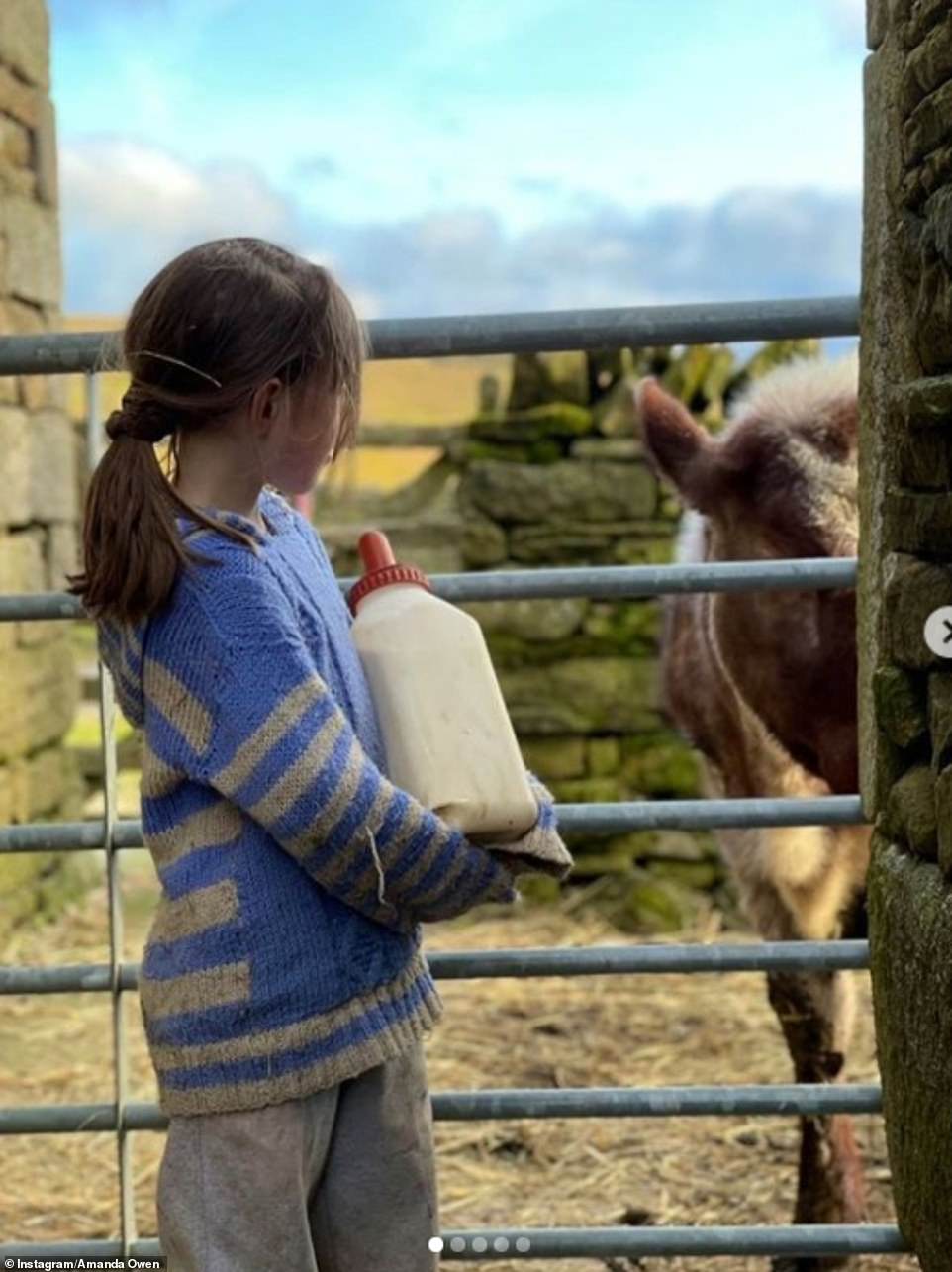 Owen wants her children to follow in their footsteps as long as it makes them happy, despite it being hard financially

Many of the children help out on the farm when they are not at school – or travelling to and from as the journey takes one-and-a-half hours each way.

‘In order to make a big family work they all need to tow the line. It’s not about child labour – it’s about pulling together,’ Owen told the Daily Mail in an article in 2018.

The couple are keen, too, to pass their farming legacy down to the children – with Clive saying the sooner they can take over the better, although he’s not bothered about retiring to a bungalow any time soon.

Owen wants her children to follow in their footsteps as long as it makes them happy, despite it being hard financially.

‘I followed my dream – which at the time was frowned on as a ridiculous idea – and here I am now,’ she said. 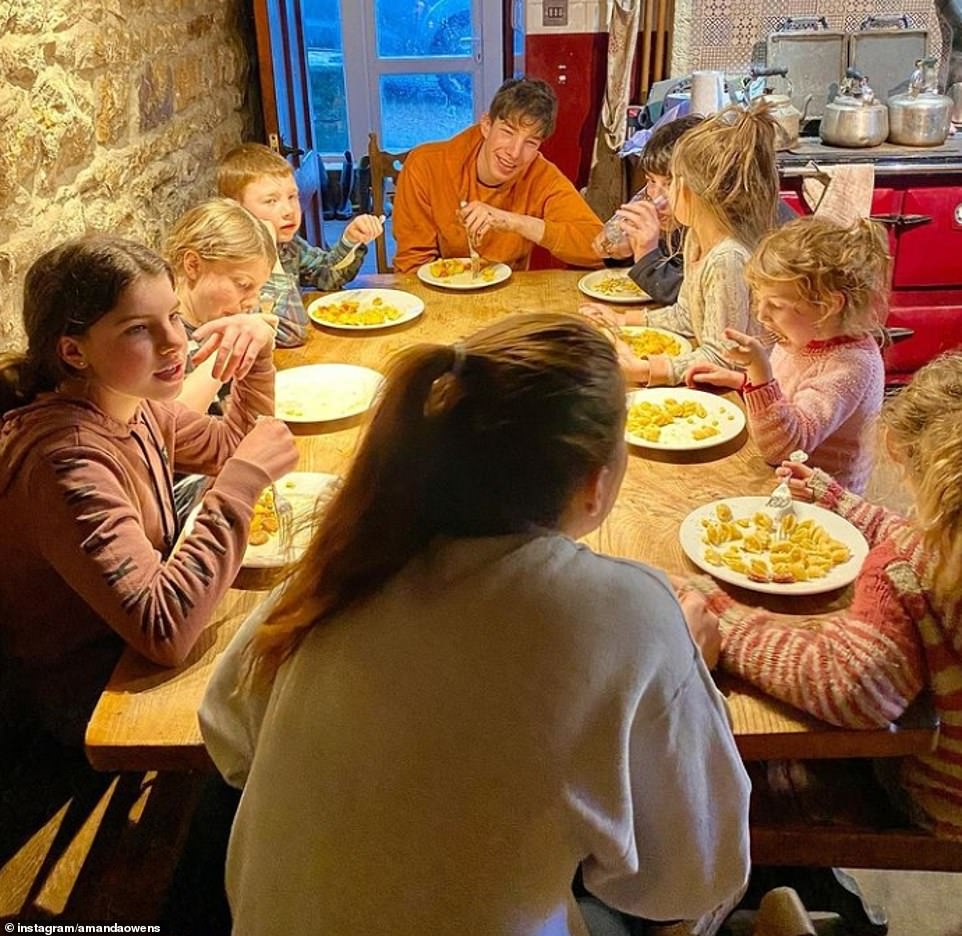 With the nearest shop so far away – and the risk during winter that they could be snowed in for weeks – Amanda buys food in bulk, and manages to feed her large family for just £130 a week 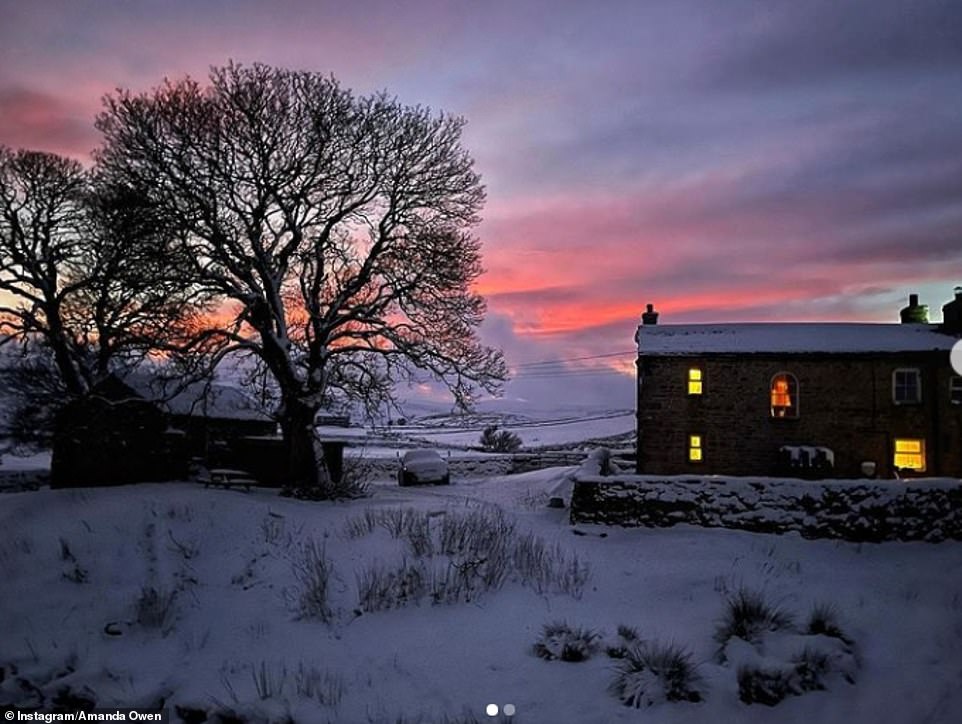 Clive and Amanda’s traditional way of life helps keep costs down, too, and they heat the house and water with a roaring fire, which burns every day no matter what the weather (pictured, their home)

Clive and Amanda’s traditional way of life helps keep costs down, too.

With the nearest shop so far away – and the risk during winter that they could be snowed in for weeks – Amanda buys food in bulk, and manages to feed her large family for just £130 a week.

Their water is free, channelled from the stream on the moor, and they heat the house and water with a roaring fire, which burns every day no matter what the weather.

The biggest utilities bill is electricity, which costs £160 per month.

They pay for their annual tenancy in the stone farmhouse with the profits made from farming – although this can be a struggle with 2,000 kilos of sheep’s wool going for just £65.

On a good day they will sheer 130 sheep. 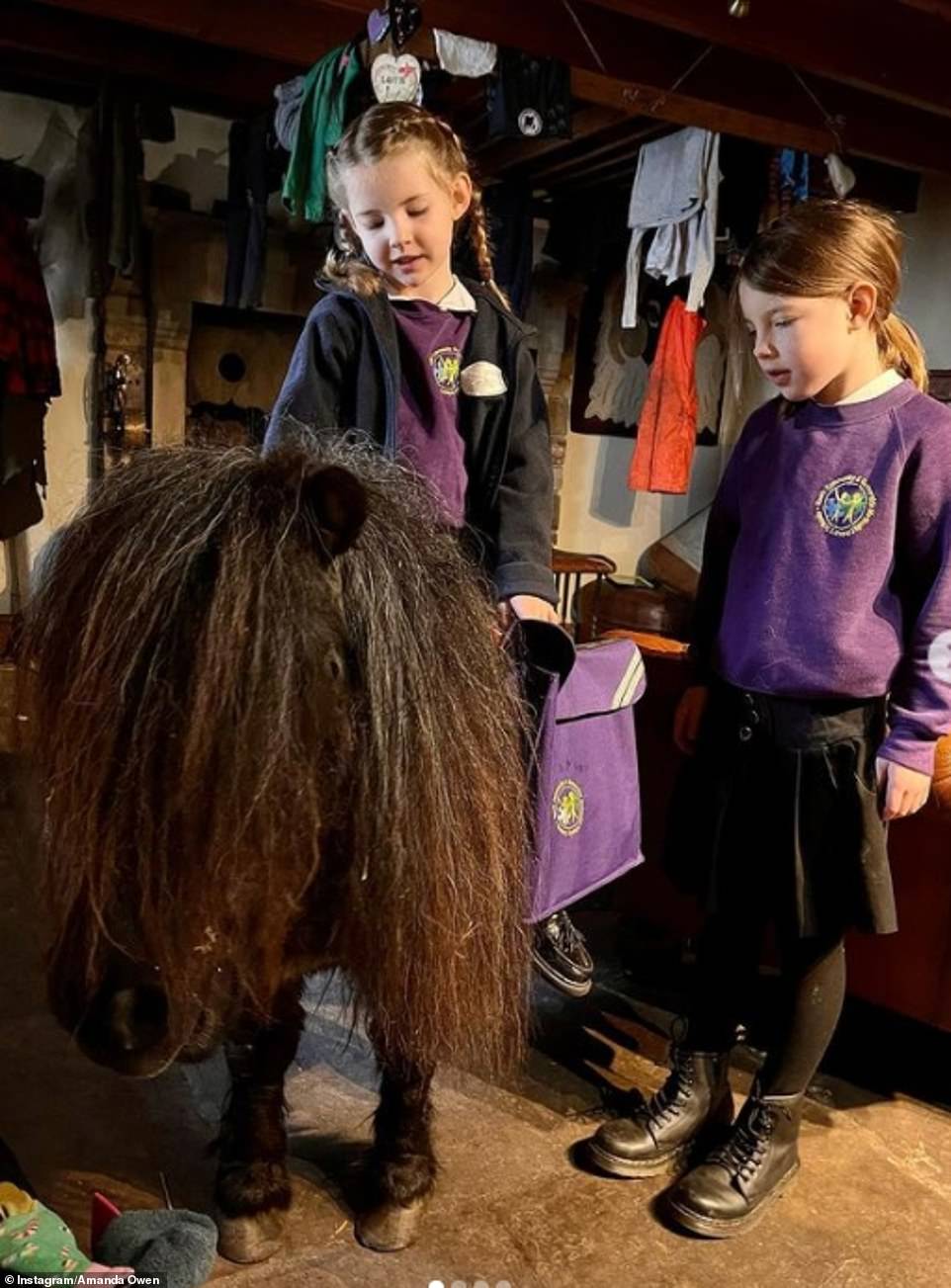 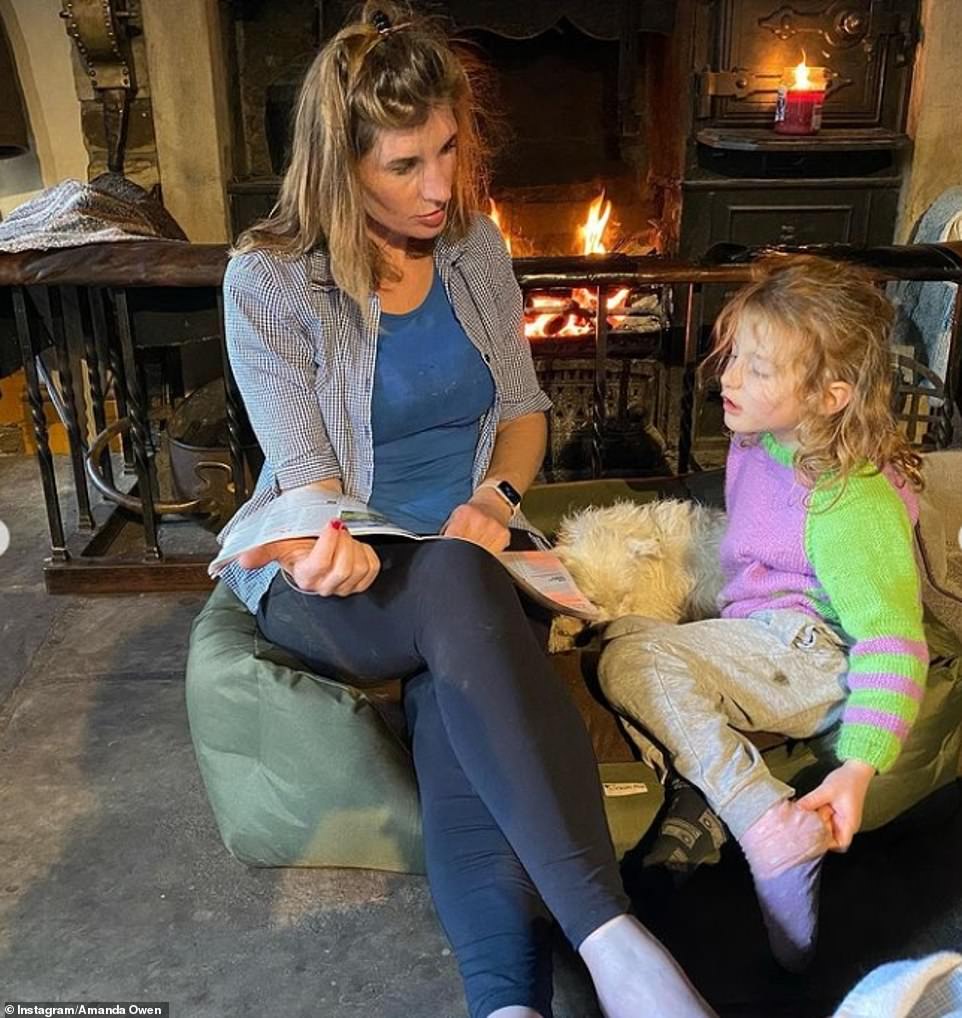 Appearing on This Morning in February, the shepherdess d said while her kids may be missing some academic lessons, they have ‘a lifetime to catch up’

Yorkshire Shepherdess Amanda has previously revealed how she is teaching her nine children ‘responsibility and life skills’ by getting them to count sheep on her farm rather than formal lessons during lockdown.

Appearing on This Morning in February, the shepherdess explained she tends to apply subjects like maths to everyday life, and said while her kids may be missing some academic lessons, they have ‘a lifetime to catch up’.

Amanda explained: ‘We’re trying to prioritise and work out what is important. Kids well fed with a smile on their face, doing some work, getting some fresh air, and we will get through it.

‘Now is not the time to try and be tiger mother and be competitive.

‘The only thing I would say to people is have the courage to go with what you think is right for your kids, every child is different.

‘Some of my kids are better at their school work. Edith has been getting star performance. That’s down to her.’

The shepherdess continued: ‘What I like to teach them is responsibility.’

She added: ‘As part of a big family, we all have things to do other than school work but it’s pretty much about teaching them responsibility. ‘

The mother-of-nine appeared with daughters Edith and Violet, who revealed that they don’t usually do all their lessons everyday, and have been spending time learning practical skills like cooking.

Amanda explained: ‘They’ve logged in, they know what their topics are.

‘I know that there are some parents who will dress them up in their uniforms and do it from 9-3 – but I’m not a big believer in screen time.’

She continued: ‘We make it up everyday. There are so many variables things that can go wrong and as long as these guys have smiling faces, then it’s okay, who cares if it’s porridge for lunch.’ 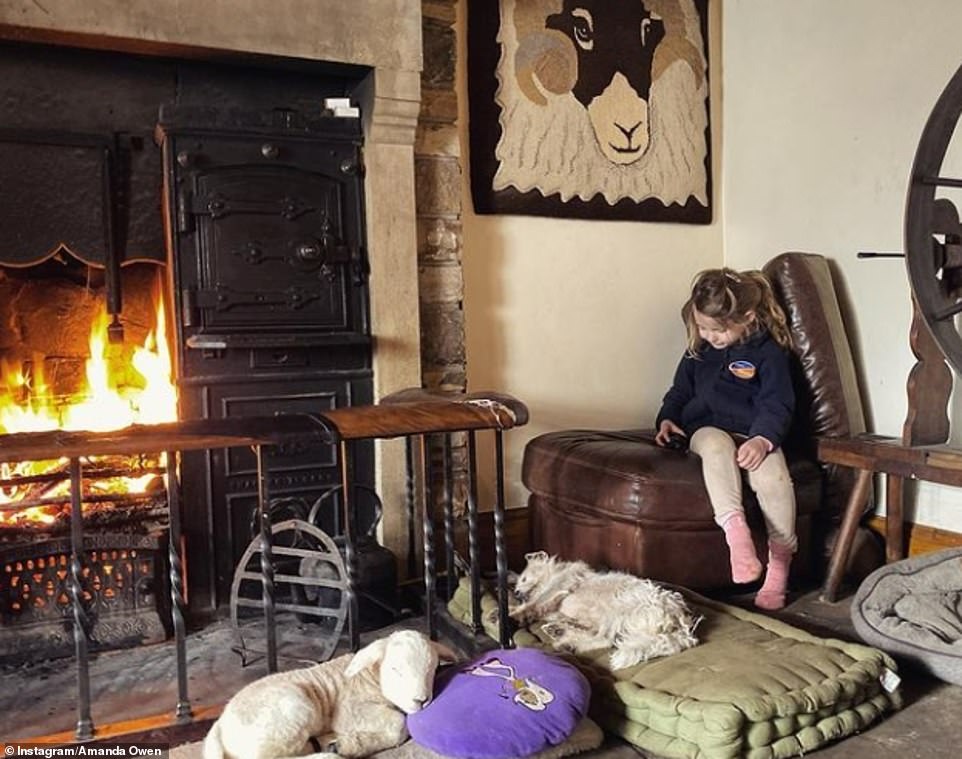 Amanda has joked her children are ‘feral’ in the past, but explained she always wants her youngsters to be ‘independent’

Amanda is fond of calling her children ‘feral’ and has previously joked about how there is a fine line between a parental style which fosters independence and having social services come calling.

To the visiting eye, though, she seems to have played a blinder. Her children are all very different — both physically and by nature.

The eldest, Raven, is studying biomedicine at university (she’s at home for Christmas), while Reuben hated school and left as soon as he could, but has just landed his first job as an engineering apprentice.

In December, she told DailyMail: ‘Both have found their feet and their place in the world, which is all any parent wants’.

‘Above all, I want them to be independent, and to know that they can do whatever they want in life — but they have to bear in mind that they have to put in the effort themselves.

‘I don’t care if that’s at school, or whatever, but it has to be up to them. Reuben got his job by writing letters himself. I didn’t do it for him.

Teaching children about the circle of life 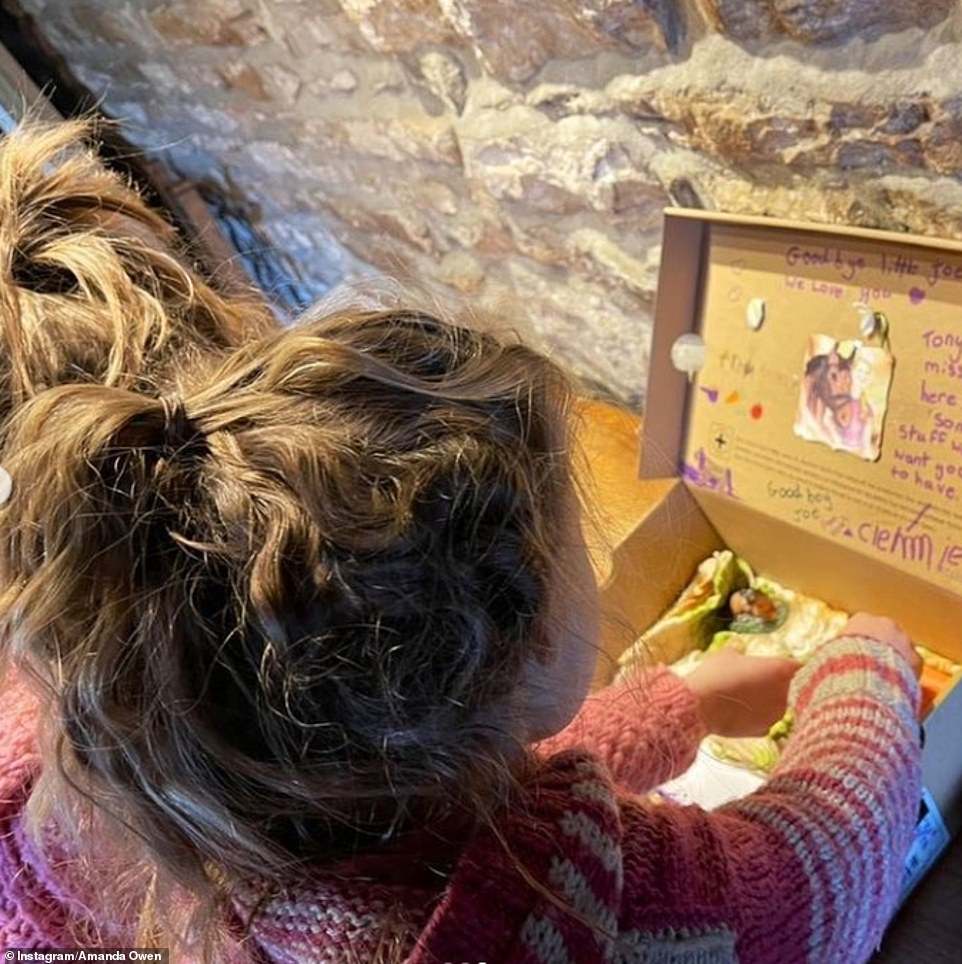 In photographs shared last month, Amanda revealed the family were devastated by the death of their pony Little Joe and the children were encouraged to take part in a funeral 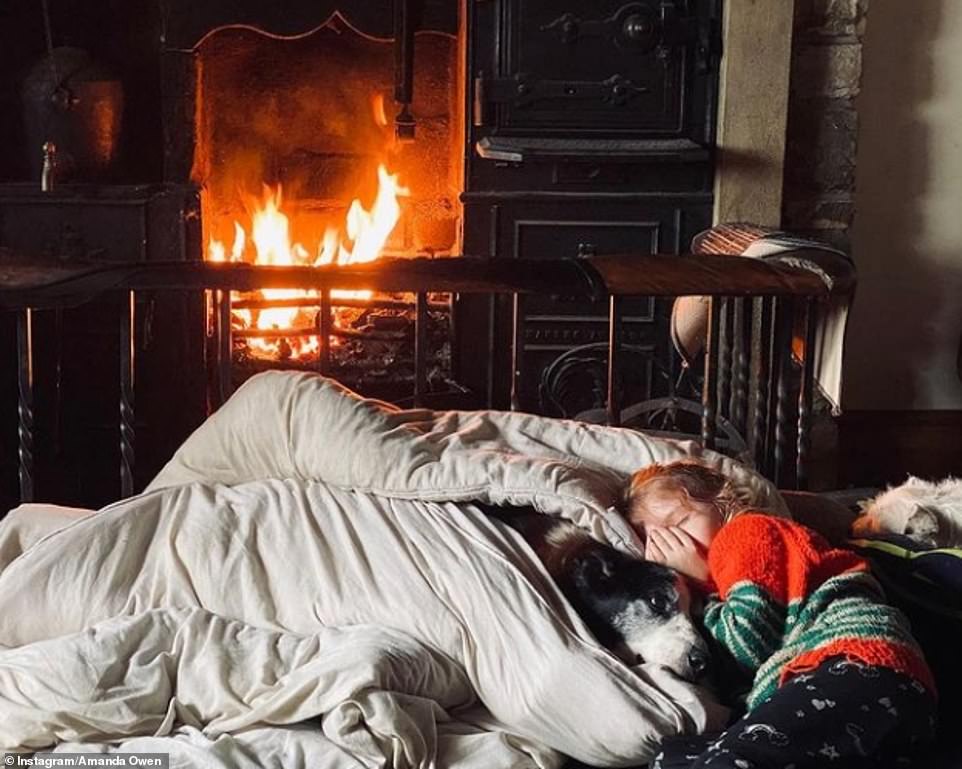 In October 2020, Amanda shared a handful of photos of some of her young daughter snuggling up with her sheep-dog Bill on the hearth in his final days

The Huddersfield mother-of-nine often shares snaps of her children relaxing at home with their pets – and makes it clear that the youngsters are educating in every aspect of raising the farm animals.

In photographs shared last month, Amanda revealed the family were devastated by the death of their pony Little Joe.

Posting snaps of her children with the horse, she wrote: ‘Right up to the very end he would come out with us when we went out riding the other horses…

‘He looked after all of the children, they rode him, bandaged him, bathed him and all he showed them was kindness. He was a shining star right until the very end…

‘Even today, which unbeknown to anybody was to be his last. He ate breakfast & mid afternoon had a suspected fatal coronary.

‘Nancy asked if he had a broken heart.’

Days later, she posted photographs of some of the younger child surrounding a cardboard box covered in scribbled messages, writing: ‘Funeral day.

‘Reminiscing about Little Joe. Everyone is smiling, apart from Tony who is bewildered.’

She said the box had been packed full of carrots, apples, mints, horseshoes, letters of note, photographs of the 30-year-old horse.

And it’s not the first time the children have dealt with a death on the farm.

In October 2020, Amanda shared a handful of photos of some of her young daughter snuggling up with her sheep-dog Bill on the hearth.

She called it a ‘peaceful end’, writing: ‘Spent his final days by the hearth.

‘At night when the fire went low he was wrapped in my smock….he couldn’t then think that he was alone.’