In his 2019 budget speech, Treasurer Josh Frydenberg famously declared the “budget is back in black” and the economy was back on track.

Despite the “back in black” coffee mugs being sold by the Liberal Party, there was still plenty of debt. In the five weeks between the budget speech and Scott Morrison’s election victory, the government sold $9.2 billion worth of debt. 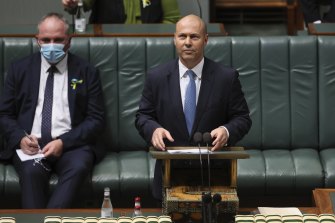 Treasurer Josh Frydenberg delivers this year’s budget which forecast deficits for the rest of the decade and debt beyond $1 trillion.Credit:Alex Ellinghausen

Fast forward to this year’s election campaign. By the time voters cast their ballots on May 21, the government will have sold more than $30 billion of debt since Frydenberg handed down his March budget.

Whoever wins office this month faces billions more in debt being sold by the end of the financial year and northwards of $100 billion through 2022-23.

And of this most recent debt, interest will be accruing on at least $500 million beyond 2050.

For all the debate over the past six weeks – from transgender kids to whether Anthony Albanese was booed at Bluesfest – one key issue has remained virtually untouched by the major parties: the state of the budget.

This election is unlike any other. The government has just overseen the three largest budget deficits on record, debt is at a record level and even Frydenberg’s most recent fiscal report shows spending will remain above revenue for the rest of the decade.

Yet neither side has outlined a way to pay down that debt, bring the budget back into balance or identify ways it will keep a lid on spending. Magic pudding is too kind a description for the approach being offered by either side of politics.

Anthony Albanese, launching the Labor campaign in Perth on May 1, used more than 4240 words to make his pitch for re-election. Not one of those words was debt or deficit.

His shadow treasurer, Jim Chalmers, launched the party’s economic policy on the day the bureau of statistics revealed inflation at 5.1 per cent and heading up. The 13-page document mentioned debt and deficit on numerous occasions. 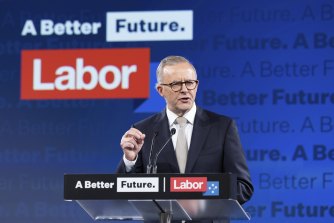 Opposition Leader Anthony Albanese launches Labor’s campaign in Perth. He failed to mention debt or deficit in his speech.Credit:Alex Ellinghausen

But in terms of dealing with it, Labor’s plan was the equivalent of dropping a one-cent piece into a 44-gallon drum. It included a modest proposal to raise extra taxes from the safest of tax villains – multinational businesses – and a similarly modest plan to cut expenditure on consultants and labour hire firms.

The same document confirmed about a sixth of the savings from the reduced spending on consultants would go towards employing more public servants.

And apparently more cash will be saved by cutting the go-to for every opposition – “waste and rorts”.

The Coalition’s offerings are no better.

Its economic “plan” is Frydenberg’s budget. The one that confirmed a deficit of almost $80 billion this financial year, another $78 billion in 2022-23 and deficits all the way out into the next decade.

For the first time in living memory, the government did not outline its savings in a glossy magazine on budget night. There was only one of note, worth about $2 billion over the next three years, which is an extension of a crackdown on high net-wealth individuals.

That’s an extra $2 billion in revenue over a period the Coalition is forecasting to collect $1.7 trillion in taxes. It’s not even a rounding error.

Revenue, by contrast, is expected to hit 23.8 per cent of GDP this year and then gradually rise to 24.6 per cent. The Coalition’s cap on taxes as a share of the economy means total revenue remains around 25.8 per cent of GDP by decade’s end.

The Coalition’s own fiscal repair plan is to “stabilise and reduce gross and net debt as a share of the economy”, with the aim of a budget balance, on average, over the course of the economic cycle.

There’s no mention of surplus. The Coalition’s plan at this stage is just more deficits.

Both sides of politics are arguing they can reduce debt and deficit by growing the economy. Many of the grants promised during the election campaign have been dressed up as “strengthening the economy”.

It means the budget is using taxpayers’ cash to support private businesses.

The Coalition has created the Critical Minerals Facility to “provide finance to critical minerals projects in Australia where private sector finance is unavailable or insufficient”. Taxpayers are bankrolling mineral companies who can’t get a loan or won’t tap capital markets for their projects. 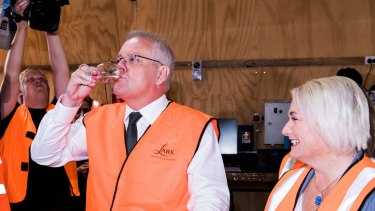 In early April, the Coalition announced it would offer $1.25 billion (or almost two-thirds of the critical minerals facility) to the publicly listed Iluka Resources to build Australia’s first integrated rare earths refinery in WA.

Iluka’s market capitalisation is around $4.5 billion and last year reported net profit of $360 million, yet it needed taxpayers’ money to get this project over the line.

Later in the same month, Scott Morrison announced in Tasmania his government’s plan to give $4.5 million to Lark Distilling to help it build a new single malt distillery.

Lark has a market capitalisation of more than $200 million and last year reported net profit of $3.4 million. Its website currently encourages potential customers to outlay almost $1000 on a 750ml bottle of its Rare Cask Series Para 100.

Like Iluka, it could have tapped investors or borrowed money to install this distillery. Instead, taxpayers now have a financial interest in the ability of a spirits company to sell its wares.

Some grants are clearly not paying for anything to strengthen the economy. A $320,000 dog park in the marginal Liberal-held seat of La Trobe (promised by the Coalition) and $200,000 to upgrade two dog parks in the marginal Labor-held seat of Macquarie (pledged by Labor) might make dogs happy but offer nothing to productivity, wages growth or the budget bottom line.

Research from the independent Grattan Institute this week noted given the direction of interest rates over coming years, revenue and spending reforms were needed now to reduce the size of deficits and maintain overall debt sustainability.

Grattan Institute CEO Danielle Wood told The Conversation that the size of government had been increased with neither side of politics prepared to have a discussion about what that means.

“In fact, the size of government’s increased [by] about 2 per cent of GDP, which is pretty extraordinary. Yet we’ve had no conversation about how we pay for that.”

When Frydenberg handed down his 2019 budget, he measured the nation’s interest bill in terms of schools or hospitals that could be built.

During COVID-19, interest costs fell sharply. Part of that was due to the Reserve Bank buying up hundreds of billions of government debt (it now holds a record $360 billion in federal and state debt, much of which was purchased with cash it created as part of its quantitative easing program).

But interest rates are turning around tremendously fast. 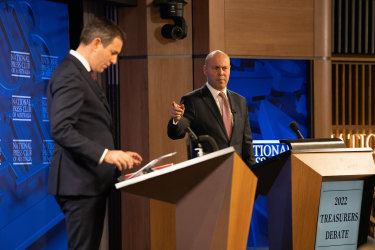 The men who will hold the nation’s purse strings at their one and only debate during the election campaign.Credit:Olive and Maeve

It was only in October last year that the government was selling short-term debt at negative interest rates. In other words, investors were paying the government interest for holding the country’s debt.

When Frydenberg and Chalmers faced off at the National Press Club last week, both were pressed on how they would deal with the budget’s debt and deficit problems.

Frydenberg conceded debt was higher, just as it is around the world, but was quick to point out that his most recent budget was better than had been feared just a year ago.

His mantra was the “fastest fiscal consolidation in more than 70 years”. That’s a consolidation that still leaves the budget in deficit for the rest of the decade.

Chalmers’ answer was just as underwhelming. His focus was on the “most wasteful government since Federation” and how the real question was how to “grow the economy in an inflationary environment”.

One of those two men will have the nation’s finances in their hands after May 21.