A new warning against overseas travel has sparked calls for billions of dollars in federal aid for the tourism industry as the government prepares to continue substantial curbs on international border crossings for most of this year.

Australians are being told to expect the border bans to continue despite a mammoth vaccination scheme because scientists do not yet know how effective the new vaccines will be in slowing the spread of the virus. 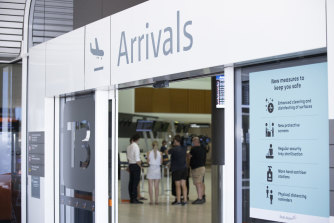 The tourism industry says it needs help because international borders will likely stay closed for most of the year.Credit:Getty Images

Scientists told The Sydney Morning Herald and The Age the international border would have to remain largely closed because of the risk of travellers spreading COVID-19 even after they had taken a vaccine.

Health Department Secretary Brendan Murphy warned against forecasting beyond three months during the pandemic but said "the answer is no" when asked on ABC TV if there could be a widespread overseas travel later this year.

"I think we’ll go most of this year with still substantial border restrictions," he said. "Even if we have a lot of the population vaccinated we don’t know whether that will prevent transmission of the virus, and it’s likely that quarantine will continue for some time."

Professor Murphy said the plan was to go "as safely and as fast as we can" with the vaccine rollout and then consider the next phase.

Tourism and Transport Forum chief executive Margy Osmond said the government message was another blow even though the industry accepted the federal health advice.

Ms Osmond said the industry would need a "pay-packet support exercise" to ride out the crisis and said the solution could be similar to the JobKeeper wage subsidy, which is due to stop at the end of March after $101.3 billion in payments.

"We can’t recover without international borders being opened at the appropriate time," Ms Osmond said.

The tourism industry estimates 60 to 70 per cent of revenue comes from international visitors and a Chinese tourist spends about $8,000 on a visit compared to an Australian traveller spending $1,500 on a domestic trip.

The TTF estimated the industry would normally post sales of about $5 billion over summer but had foregone at least $3 billion of this, in part because the states had increased uncertainty for Australians about sudden border closures.

The Victorian branch of Tourism Accommodation Australia said 40 per cent of Melbourne's tourism usually came from international travellers, highlighting the cost to jobs.

"Continued uncertainty regarding international travel should instead lead [Australians] to consider the opportunity to explore their own backyard," said general manager Dougal Hollis.

Australian Tourism Industry Council executive director Simon Westaway said employers had to accept the prospect of a "hard-locked" border for all of this year.

Mr Westaway said open domestic borders were a "must" when the international curbs were so strict, and that companies needed frank engagement with the government.

In a separate warning about overseas arrivals, Victorian Premier Daniel Andrews said there was little prospect of international students arriving this year in large numbers.

"Tens of thousands of international students coming back here is going to be incredibly challenging, if not impossible during this year," Mr Andrews said.

"I take no joy in saying that, but I try to be as frank as possible about that."

Prime Minister Scott Morrison is due to meet state and territory leaders this Friday to discuss the vaccine rollout, which will proceed within weeks if the Therapeutic Goods Administration approves vaccines from Pfizer and AstraZeneca.

"I know the disruptions that come from borders and some of the restrictions put in place cause great frustration and inconvenience to people, but when you stand back and look at how Australia is performing against the rest of the world, I’d much rather be here than anywhere else," Mr Morrison told radio station 2GB on Monday.

The government is seeking information from authorities in Norway after the deaths of about 30 people among 42,000 who took the Pfizer vaccine.

Unless the TGA rules otherwise, the government is planning to offer the Pfizer vaccine to five million people, including health care workers and older Australians, and to offer an AstraZeneca vaccine to 25 million people.

Australian National University professor Peter Collignon, an infectious diseases physician, said the vaccines appeared safe and effective but would not stop some travellers bringing COVID-19 into the country.

"We’re not even expecting most adults in Australia to be vaccinated until September or October and then we have to be concerned about the rest of the world being vaccinated as well," he said.

Professor Collignon said border restrictions would have to continue in some form until global transmission was curbed, an outcome that might only become clear after the end of the next northern winter.

"We won’t really know where we are at for another 18 months from a global travel point of view," he said.

Professor Kelly has cautioned, however, that the effect of the vaccines on the transmission on the virus is not yet clear.

University of Melbourne professor of epidemiology Tony Blakely said it was possible that someone who was vaccinated could still catch and spread the virus, even though they would be protected against severe illness.

Professor Blakely estimated the 14-day quarantine rules would continue for international arrivals until at least September or October and possibly beyond, depending on what was learnt over time about the vaccine benefits.

"Even at the end of this year and into next year, unless our vaccines are more effective than what we think, there’s still going to be plenty of people in our population who are not yet immune," he said.

"And we’re quite suspicious that the vaccines will not be perfect the first time around – what’s been achieved is incredible but it’s not perfect.

"So next year there will still be outbreaks occurring in pockets in Australia. They won’t be as violent because most people will be immune or protected. But it will not be all the way back to normal. I know it’s pessimistic, but it’s just true."