Two women who escaped the cult formerly known as ‘Children of God’ have claimed that rampant sexual abuse of children was ‘actively encouraged’ in its communes.

Verity Carter and Hope Bastine, both in their 40s, grew up in the British communes of the California-founded cult which is now known as The Family International.

Their stories are told in the Discovery+ docuseries Children of the Cult. To mark the documentary’s release, both women appeared on today’s This Morning with Eamonn Holmes and Ruth Langford.

Verity, who was born in the cult and suffered sexual abuse from the age of four, claimed she saw manuals instructing parents on how to use physical and sexual abuse to raise their children. 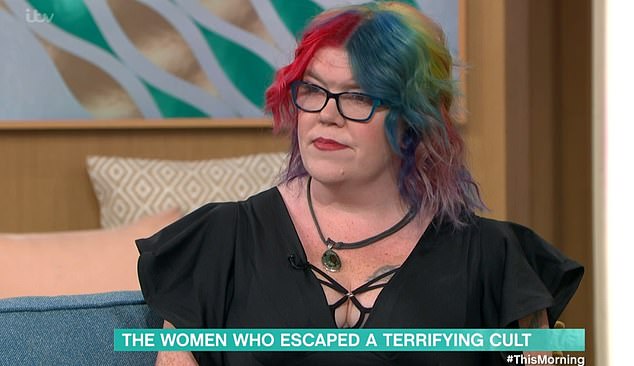 Verity Carter, pictured, revealed how she was born into one of the Scottish communes of the Children of God cult, which is now called The Family International, on This Morning 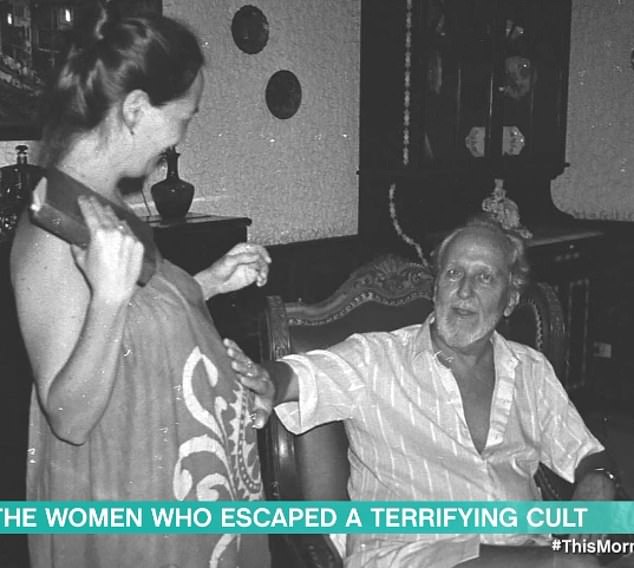 David Berg, pictured, created the cult in California in 1968. The so-called Fundamentalist Christian group was controversial for a method called ‘flirty fishing’ which encourage female members to have sex with potential converts

Hope recently brought her abuser Derek Lincoln to justice. He was jailed in Glasgow for 11 years and six months.

Both women said they were still healing from the abuse they suffered at the hands of the cult, which was created by David Berg in California in 1968.

‘I was born into the cult, I was born in Scotland, I was moved around across the UK and Ireland quite regularly. Truth be told, I don’t know a lot of the address I grew up in,’ Verity said.

‘The locations were kept secrets, the name of the individuals that crossed our paths were usually false. Both of my parents are part of the cult and me and my siblings were all born into it,’ she added.

Verity and Hope managed to leave the cult and have spoken out of their terrible experiences in the communes.

Verity said she suffered sexual abuse from the age of four in the cult, and that sexual relationships with children were encouraged. 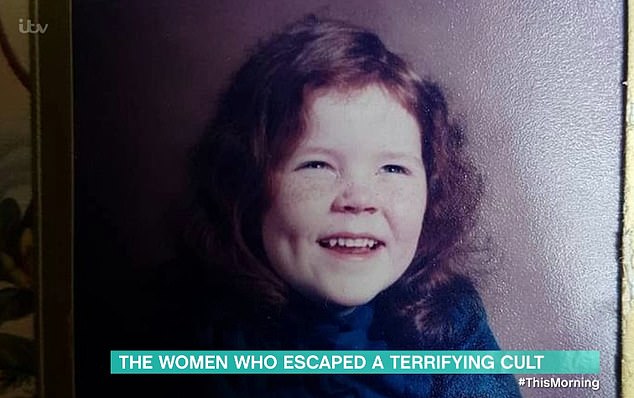 Verity, pictured as a child, said she suffered from sexual abuse in the cult from age four, and claimed the cult encouraged it

Who are the Children of God? The cult rampant with sexual abuse with communes around the world and celebrity memebrs

The Children of God sect was founded in 1968 by minister David Brandt Berg.

Berg spent much of the 1960s traveling to different churches near his home in with his own kids, singing hymns and ‘spreading the word of God’, before the family to Huntington, California, in 1967 where he set up a coffee shop, and began preaching to customers.

Originally known as Teens of Christ, Berg soon changed the name to Children of God in the hopes of appealing to a wider crowd that included vulnerable youths looking for a support and comfort.

By targeting these groups, Berg was able to quickly expand his ‘religion’ and by 1969, he had more than 50 members in his ‘family’.

Soon after, the Children of God left Huntington and began traveling once again, expanding their ranks to include more than 200 people over the following eight months.

Communes were soon set up around the world, with members moving in together to form their own ‘families’ of Children of God converts – and by 1972, there were 130 ‘communities’ of full-time members around the globe.

The Children of God were asked to give up their jobs and devote themselves full time to preaching Berg’s teachings and proselytizing for additional members – while Berg himself lived in seclusion, sharing his prophecies through written letters known as ‘MO’s Letters’.

But while on the outside, the group claimed to be spreading the world of God – and of Berg – internally, members were encouraged to partake in incestuous sexual relationships with minors.

In 1976, female members began being urged to take part in a practice known as ‘flirty fishing’, which saw them forced to ‘show God’s love’ by having sexual relations with potential members in order to lure them into the group as full-time converts.

Following Berg’s death in October 1994, the group – which had, by then, rebranded itself as The Family of Love, then The Family – was taken over by long-time member Karen Zerby.

In 2004, the group’s name was changed to The Family International.

Hollywood actors Rose McGowan and Joaquin Phoenix have both shared details of their own early childhood experiences in the sect.

‘My earliest memories go back to four years old for my first incident of sexual abuse that I can remember,’ she said.

‘I don’t have many memories before that. The manual instructed on sexual abuse for children as young as two, It was severe.

‘It was sent out to the communes. Not only was it condoned but it was encouraged as a way to raise their children in god stuff,’ she added.

The Family International issued an apology, which Eamonn read out on the show.

‘The Family International has extended open apologies to anyone who was hurt or might have been harmed in any way during their time residing in family communities, which are likewise extended to Verity and Hope,’ he read.

‘Although the Family International has apologised for any hurt, real or perceived, that any member or former member may have experienced, we do not give credence to tales of institutionalised abuse,’ he went on.

Responding, Verity said: ‘I don’t see how they can claim it was not institutionalised when they got manuals on how to abuse children physically and sexually and otherwise as instruction to parents for child-raising.

‘It was institutionalised whatever they say,’

‘But it wasn’t just the physical and sexual abuse, that the very obvious side.

Verity said it took her years to recover from the cult’s effect on her.

‘It’s caused me a lot of damage. There were periods of my life where I went off the rails and there was a significant level of self-medication, which has left me with physical after effects,’ Verity said.

‘Mentally, I have long-term effects: I have insomnia, I have flashbacks, I’ve received help and counselling, but it’s something that I have to manage rather than to cure,’ she added.

‘In day to day life, there are still things that occur each that that may or may not trigger me, sets something off, society difficulties, big gaps in my cultural knowledge,’ she went on.

But despite the difficulties, Verity added she lived a normal life after years of healing.

‘However, I moved on with my life and have been able to manage those symptoms much better than I did and now raising my family and volunteering, I am as close to normal as can be at that stage,’ she said.

In the show, Hope explained what the cult stood for and the way it operated on its members.

‘They called themselves a Fundamentalist Christian group, but there was a novel belief, which was the “love love” under David Berg’s directive: anything could be done if done in love, and that did mean that it exposed us to an inappropriate amount of abuse,’ Hope said.

‘I think when I talked to my parents and tried to understand their psychology it’s like the gentle drip method, David Berg would come out with a revolutionary prophecy or radical belief and it would be simultaneously exciting, “Oh we’re doing something different”,’ she continued.

‘Each time it would get more and more extreme and then it’s under this sort of cloak of entrapment: We lived in communes, my mother had to relinquish her passport to the leaders, you had to forsake and give all your goods to the cult, so she had no other assets, they filtered her inheritance from her,’ Hope went on. 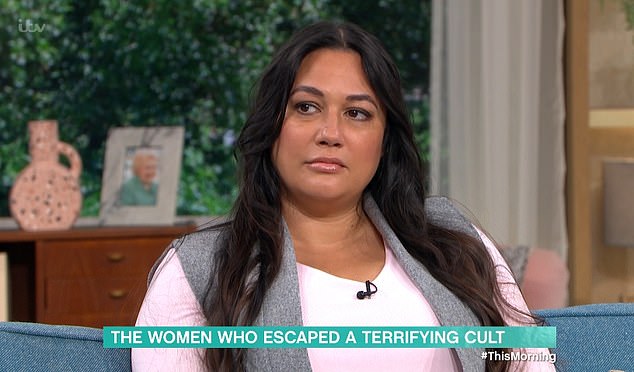 Hope Bastine, pictured, was also sexually abused in the cult and  brought one of her abusers, Derek Lincoln, to justice

Hope, who said she was ‘hungry for knowledge’ after leaving the cult and took herself to college, brought one of her abusers to justice, Derek Lincoln.

‘It was one of the best days of my life, mostly because judging from their apology, we’re gaslit,’ Hope said.

‘They’re saying “no, you didn’t experience abuse, that’s just our way of life. And it doesn’t help with the healing process,’ she said.

But when the government says “we acknowledge this, we recognise this as wrong” and this person is going to pay the price, it’s validation and it goes a long way for the healing process,’ she added.

Derek Lincoln was sentenced to 11 years and a half in jail at Glasgow Crown Court in 2020. 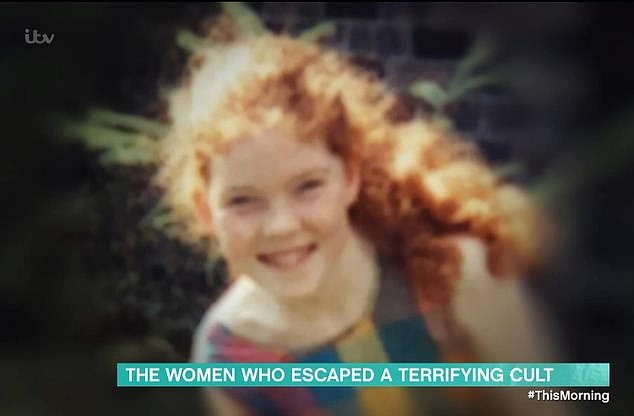 Verity as a child in the cult. She claimed the organisation had manuals on how to sexually and physically abuse children

Verity said she hoped the docuseries would open people’s eyes on cults.

‘I’m hoping that people will take away that these things still go on, if someone comes to you with an extreme story it may actually be true,’ she said.

‘Hopefully, professionals can deal with these cases better,’ she added, claiming it wasn’t the case for her.

She also said she hoped ‘other survivors of abuse not just from our cult but from any form of abuse will be encouraged to find their voice and make their statements,’ she said.

‘If more of us speak, we’re more likely to get our cases in court, there are more abusers out there and I’d like to see more justice,’ she said.

Hope revealed that she received several letters following her case against Derek Lincoln, with many people saying they had suffered at the hands of Children of God.

She said there was an open, cross-agency case against the cult.

Children of the Cult is now available on Discovery+.