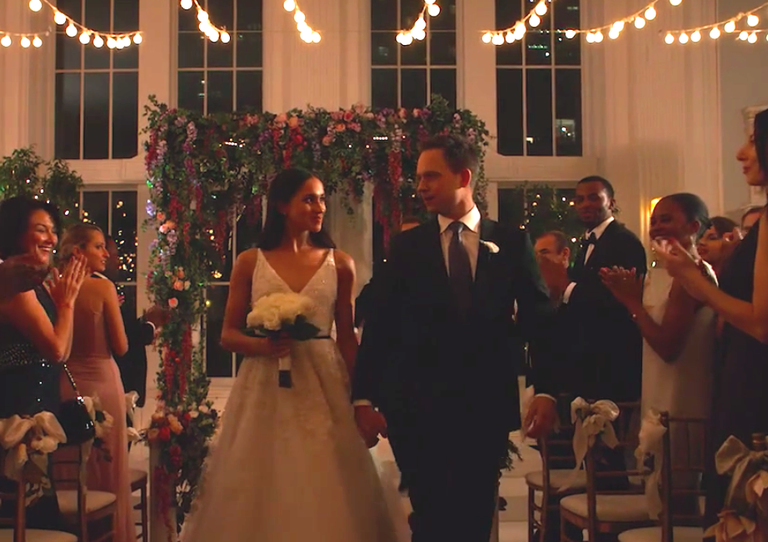 Let’s be real here, Suits fans: Mike and Rachel’s relationship was never a huge factor in why you watch the show. Unlike Harvey and Donna’s endlessly tantalizing will-they-won’t-they, or Harvey and Mike’s layered mentor-protégé dynamic, the Mike/Rachel romance has always just sort of been there. They’re completely inoffensive, sometimes charming, but never the reason you tune in.

That is until tonight’s Season 7 finale, in which Mike and Rachel finally tie the knot (after being engaged for roughly 105 years), right before leaving town— and the show—for good. As you may or may not be aware, Meghan Markle is also getting married in real life, which prompted her decision to leave the show along with Patrick J. Adams at the end of this season. It’s a pretty huge shakeup for Suits, so let’s get into how the goodbye went down.

Mike and Rachel get an offer they can’t refuse—to run a legal clinic in Seattle focused on class-action cases against Fortune 500 companies. Given Mike’s ongoing desire to take more pro bono work, it’s a no-brainer, but the job requires them to leave within days and their wedding is still six weeks away. “We could delay the wedding,” Rachel suggests, but Mike refuses: “I’ve wanted to marry you from the second I met you, and I am tired of waiting.” So instead they move it up, enlisting Donna and her low-key mythical powers to put together a beautiful, rustic wedding at short notice.

The ceremony and vows are pretty much exactly what you’d expect from this couple—pretty, earnest and instantly forgettable—but Rachel’s dress is lovely, and despite the short notice, Harvey and Donna both make it to their rightful places as best man and maid of honor. They also exchange a meaningful glance right as Mike and Rachel kiss, and a dance later in the evening, which is just enough of a breadcrumb to keep Darvey fans hanging on through the hiatus.

There’s a bittersweet moment after the vows, because Harvey doesn’t yet know the reason for the accelerated wedding, and Mike has to tell his mentor that he’s moving across the country. Harvey really does not want him to go, but Mike quietly tells him “It’s time, Harvey.” The pair share a long hug, as Harvey gazes sadly into the middle distance and tries to imagine a future with Katherine Heigl by his side instead of Mike.

So, how does Suits move forward without two of its core cast members? While Adams may be open to making guest appearances in the future, Markle is far less likely to be available, and this finale didn’t offer any hints at all as to what the show’s future will look like. I’m not sure Suits will ever feel like Suits without Mike Ross, but fortunately, this episode served as a compelling back-door pilot for Gina Torres’ Chicago-set Jessica Pearson spinoff, in case you need to jump ship.