Federal Labor’s decision to end a coronavirus funding deal for hospitals has come under fire from states and territories, as the Victorian Healthcare Association warns of devastating implications for healthcare and longer waiting times for patients.

The deal, which has been running since May 2020, shares COVID-related hospital costs equally between federal and state governments but will end on New Year’s Eve. 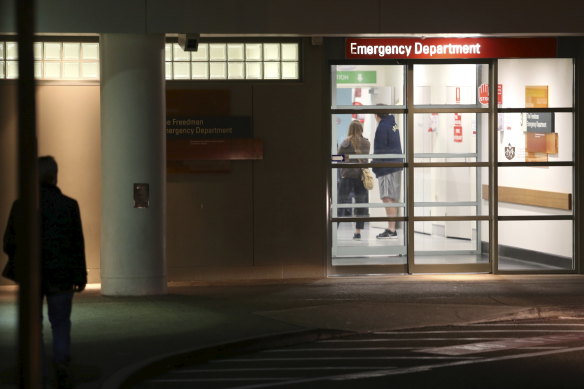 A federal government agreement to share COVID-related hospital costs equally with the states will end in December.Credit:Damian Shaw

No new money was allocated in Tuesday’s federal budget, despite pleas from health ministers and premiers across the country that a joint funding model continue until 2025.

The Victorian Healthcare Association’s deputy chief executive, Juan Paolo Legaspi, said the blow came as the Andrews government’s funding of hospitals was failing to match inflation, which is increasing the cost of delivering healthcare.

“The Commonwealth government’s decision to cease its COVID funding in December and not step up to a fairer 50-50 funding deal without a growth cap of 6.5 per cent will have a devastating impact on Victoria’s public health system,” Legaspi said.

“With inflation skyrocketing, this budget is effectively cutting funding to Victorian hospitals when they are experiencing record high demand. It has the potential to blow out waiting times for all types of healthcare. This federal budget is worrying news for Victorians and our public health system. ” 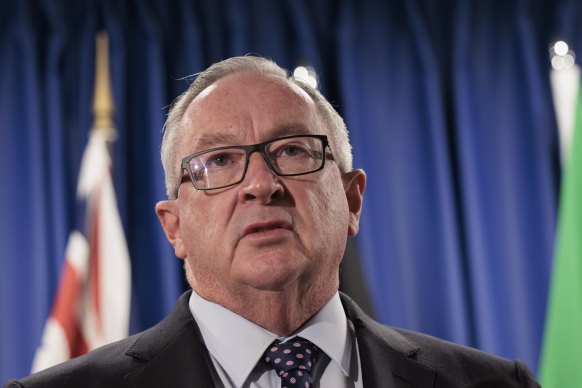 “I was hopeful of an improvement on what was happening under the former government, but sadly, it would appear that the states and territories public health systems have been given diddly-squat,” Hazzard said.

“This spells disaster for the frontline staff patients. It will add to the pressure on what is already a pressured situation.”

Hazzard, who announced his retirement from politics hours before the release of the federal budget, said public hospitals across Australia were being crushed by demand, as spiralling inflation, hundreds of thousands of delayed elective surgeries and the impact of the pandemic drove up the cost of running public hospitals to record levels.

On Wednesday, Victorian Premier Daniel Andrews and Queensland Health Minister Yvette D’Ath renewed their push for a 50-50 hospital funding agreement between states and the Commonwealth.

At a meeting of the national cabinet last month, states and territories formally requested the shared funding be extended until June 2025.

Premiers and chief ministers also demanded Prime Minister Anthony Albanese abolish the 6.5 per cent annual cap on the rise in hospital costs, which limits the Commonwealth increase to about $2 billion a year, and requested an urgent review of the calculations behind the billions of dollars allocated to public hospitals, in a move that threatened to blow out the federal health budget.

Earlier this year, the Victorian Healthcare Association revealed soaring inflation could slash Victoria’s health budget by more than 13 per cent in real terms this financial year, leaving doctors warning of worse outcomes for patients at a time of record-breaking demand.

In May, Andrews, vowed to confront the winner of the federal election and demand a 50-50 funding split for hospitals, backed by other state leaders.

On Wednesday, he stopped short of criticising the federal budget, but reaffirmed the Victorian government remained committed to securing an equal funding deal.

“The COVID arrangements will continue until the end of the year, and then that work of continuing to lobby for a better health funding agreement will continue.”

D’Ath, who sent a letter to federal Health Minister Mark Butler on behalf of her state and territory counterparts requesting an urgent funding package, said she also remained committed to reforming hospital funding, including abolishing the 6.5 per cent annual cap, and securing a 50-50 funding agreement for public hospitals.

While the Australian Medical Association welcomed the government’s investment of $980 million for general practice in the budget, national president Steven Robson warned it failed to address the logjam plaguing public hospitals.

“With inflation expected to hit 7.75 per cent by the December quarter this year, any extra federal funding will simply be eaten up by rising healthcare costs before it reaches even a single patient, leaving no funding to provide extra services to meet community health needs.”

The Australian government has allocated $12.8 billion to states and territories for the hospital and public health response to the pandemic through the National Partnership on COVID-19 Response, which was agreed to in May 2020, during the emergency phase of the pandemic.

In June, a decision by the national cabinet was made to extend the agreement until December 31.

The federal government is yet to make a decision on the public health measures that will continue as part of a flexible response to COVID-19.