Ito Aghayere made her ‘Star Trek: Picard’ debut as a young Guinan in the March 24 episode. HL spoke EXCLUSIVELY about how this role was just ‘right’ for her, working in tandem with Whoopi Goldberg, and more.

Jean-Luc Picard got a blast from his past in the latest episode of Star Trek: Picard. Picard traveled back to 2024 and crossed paths with young Guinan, played by Ito Aghayere. Guinan and Picard’s friendship is a special one that was originated by Whoopi Goldberg in Star Trek: The Next Generation. Young Guinan has no idea how much Picard will mean to her in the years to come, but they do connect fairly quickly when they first meet.

HollywoodLife spoke EXCLUSIVELY with Ito about why she was drawn to the role of Guinan even before she knew she was playing the iconic character. She opened up about Whoopi being her “guiding light” for the character, working with Sir Patrick Stewart, and how they collaborated to mesh their versions of Guinan into “one world.” Read our Q&A below: 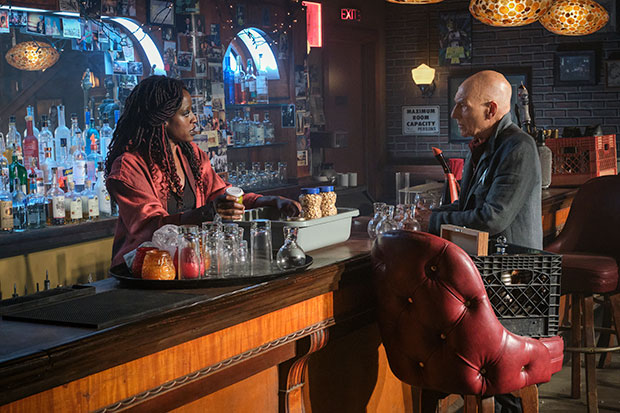 Guinan is a character that is obviously well known. When you went in for the audition, did you know that you were auditioning for Guinan?
Ito Aghayere: No. All I knew was there was this girl named Gwen, who was trying to get rid of this guy named John who is making her crazy. He wouldn’t leave her bar, and she had to pack everything up and go because she’s fed up with everything. That’s all I knew. There was not much there, but there was everything there. For me, what I connected to was just her disappointment and her fear to hope in the world around her. I think there are a few times when, as an actor, you’re presented with a piece that you’re able to audition or you’re able to work on that fits right in the slot where you are emotionally or where you are psychologically or experientially. It’s not that it’s rare, but it’s always like a gift when it just fits in the pocket. I think that’s what it was for me. That’s what I identified with. In the middle of a pandemic and everything that’s been going on in the world, it just felt like a story for me as a Black woman that resonated in a very, very immediate way. That’s how it kind of came to me. I think it was a few days or a day before I had to meet with producers. It was kind of like, “Oh, and by the way, you’re playing Guinan. This is Star Trek. And, go.” That was great in itself because I love the show. TNG is one of the few shows that my parents didn’t understand but still felt like it was erudite enough and intellectual enough that they were like, “Yeah, they can watch it. We’ll go watch Wheel of Fortune on our TV.” I fell in love with Guinan as a kid and rewatched reruns through my childhood. Any time I saw special guest Whoopi Goldberg, I would always know it was going to be a dope episode. It was going to be such a good episode. That’s how I knew the role of Guinan, so finding out that a story that resonated with me on an emotional level was also part of a franchise that impacted me as a kid was just cathartic in every way.

When you were like preparing for the role, did you take anything away from Whoopi’s performance at all?
Ito Aghayere: She laid the groundwork. I’d watched interviews where she was like, “I’d watch Star Trek as a kid, and I would see this Black woman in charge of communication, running the bridge, and I am in the future. People who look like me are in the future.” Well, Whoopi was my Nichelle Nichols. My Nichelle Nichols was Whoopi Goldberg. There were very few sci-fi shows in the ‘90s that had Black women doing their thing and being so cool and effervescent. Whoopi just brought this kind of tough-life mischievous but all-knowing quality to her work, so being able to play my Guinan 400 years removed from that was such a treat because essentially what she was doing was like my guiding light. It was like, this is the person I grow into, right? So what does it mean for me to be 400 years removed from that level of wisdom, from that level of maturity? What does someone 400 years younger look like? What is my level of bitterness? What is my level of grace that I have for people, if at all? How much more fed up am I as a 400 years younger version of this character to give myself somewhere to grow? Doing that math was kind of the journey for me in finding who my Guinan was. 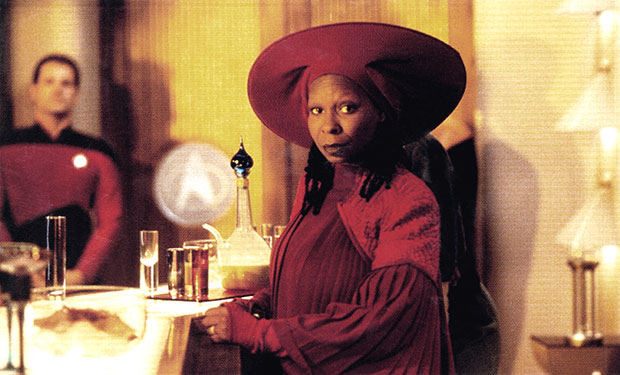 It also gives you the opportunity to make this character who is already established in the universe your own a little bit.
Ito Aghayere: Absolutely. It showed a different side to her, a different facet of who she was. It was kind of cool also to be able to pick up and choose different traits that will be brought to the character that I felt could remain, whether it was stillness or her humor or very dry sense of humor. There are certain characteristics that I was like, I want that to anchor these two characters, these two versions of this character in the same world.

Most of your scenes are with Patrick Stewart. That must have been an experience in and of itself, just being able to share the space with him.
Ito Aghayere: It was both parts surreal and intimidating. But once you meet him, you realize just how self-deprecating he is. He’s a Brit, so I guess that comes with the territory. He is so generous with the people he works with, and it releases every tension. It releases all of that stuff. We had our first scene together out of sequence. So chronologically, it was at the end of the episode. Essentially, I was meeting Patrick for the first time and we have to have this level of rapport, where I’ve already pointed a gun in his face. I’ve already ordered him out of my bar. I’ve already done all these things, and now we’re in a moment where he’s won me over. It’s just so wonderful because Patrick has this natural affability. It’s almost like working with him is this invitation into camaraderie, and that’s what he brought. The first day he was just like, “You’re my Guinan.” I was like, “Yes, I am, Sir Patrick Stewart who has been knighted by the Queen of England. I guess I am your Guinan.” It was just such a wonderful welcome into the world and this world that he’s been a captain of for decades. It was such a gift to be able to work with someone who knew the relationship that we would eventually have so that we were able to together put the seeds in the ground for what I hope fans of the show and new viewers of the show will be able to get a sense of. The sense of anticipation perhaps of what this relationship could turn into, even though it might not be there now.

Did you reach out to Whoopi at all? Did you talk to her?
Ito Aghayere: We didn’t work together because of the pandemic. Everyone who was on Star Trek essentially was shooting things out of sequence because of COVID protocols and all that, so we didn’t get to actually be on set together. I still have hopes for that. But what we did kind of come to is an understanding of, okay, so my hair looks like this. What if we do your hair like that? What if we do this? Should we block eyebrows? Let’s kind of mesh our Guinans into one world. There was a lot of collaboration in regards to that. 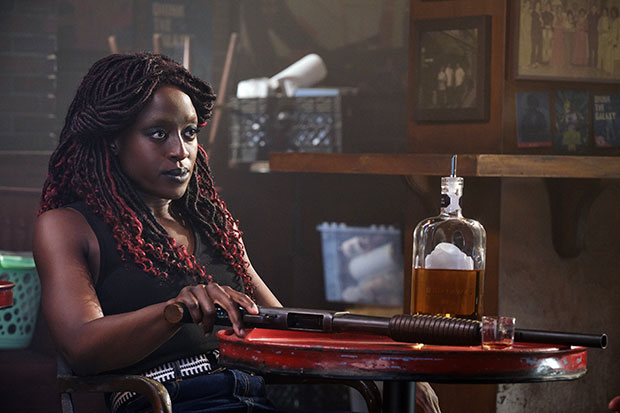 So even though you weren’t able to work together, you were able to discuss the character?
Ito Aghayere: Not in person, but we were able to kind of collaborate with a lot of the creatives and makeup and hair and special effects to figure out what should be Guinan’s look right now, so it’s not such a huge departure from the Guinan that was established years ago on TNG. So how do we kind of sync all of these Guinan’s so that it feels like they are all in the same world?