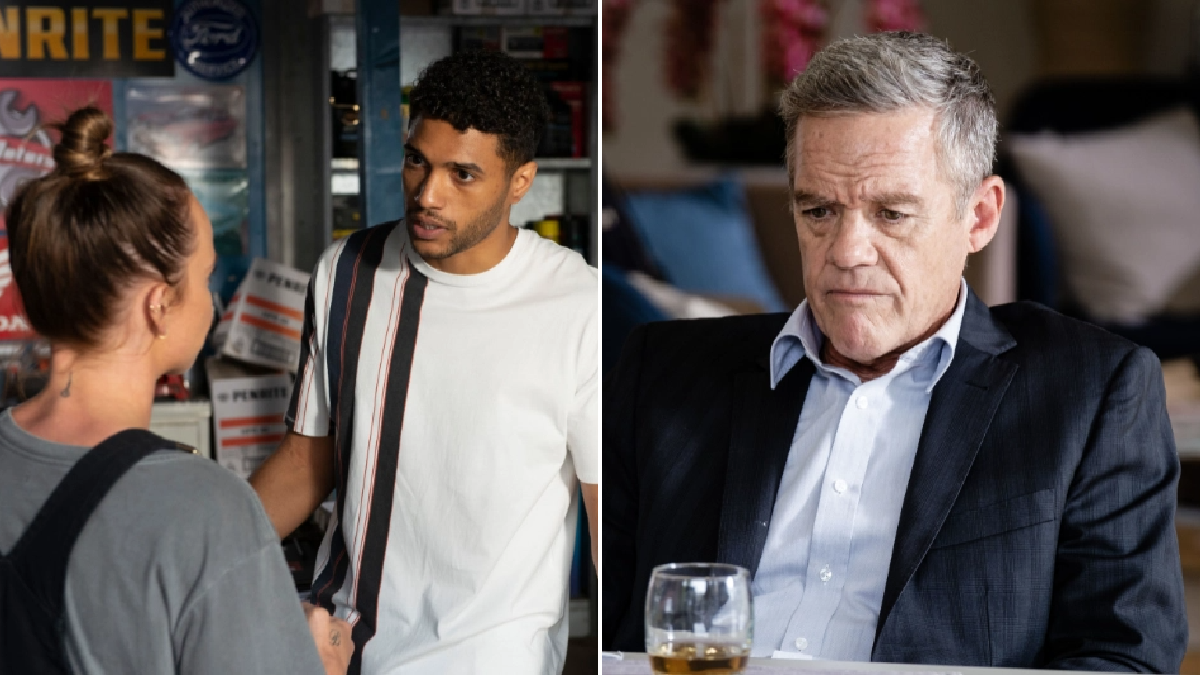 Misunderstandings, underhand tactics and bad boy behaviour are the words of the week in Neighbours. Toadie’s (Ryan Moloney) at the centre of an embarrassing misunderstanding that could do some lasting damage, Paul Robinson (Stefan Dennis) is pulling out all the stops to save Harlow (Jemma Donnovan) at great expense and Ned (Ben Hall) is risking everything. Yikes.

Ah Paul. Even when he’s good, he’s bad. The businessman is desperate to save Harlow from the clutches of Brent, but his plans to make it happen are utterly odious. For all his faults, family means everything to him and he’ll stop at nothing to protect it, even if it means ruining someone else’s life.

Toadie’s in a pickle when his loved ones pick up on the fact he’s seeing someone and they jump to a massive conclusion. It’s one that could have some serious consequences, can Toadie put it right?

Ned’s also in a pickle when he realises he’s having feelings for someone other than Yashvi (Olivia Junkeer) and he’s this close to acting on them. Will he stop himself in time?

Meanwhile, Bea’s (Bonnie Anderson) relationship is also under the cosh when she admits something devastating to Levi (Richie Morris). Will he be able to move past it?

Hendrix (Benny Turland) comes clean to Mackenzie (Georgie Stone) about how he feels. But does she feel the same?

And Nicolette (Charlotte Chimes) proves herself to be a nightmare during a volleyball game.

Here’s what’s ahead in Neighbours.

Paul throws Brent under the bus to save Harlow

Paul has every intention of getting Harlow away from Brent, who he believes is a waste of space. Harlow starts to thaw towards her granddad when she hears from Terese that he’s been having financial difficulties, and when Brent tells her he’s grateful for Paul’s legal aid she softens further. Neither have any idea what Paul is really up to – he goes to see Holden to convince him to change his story to drop Brent in it. Harlow is left devastated when she learns Holden has revised his statement as it means Brent going away for a long time. Paul is left feeling guilty at his own actions – but even his guilt won’t stop him.

Bea is about to release her first podcast and while she’s excited, the nerves are taking over. Susan gives it a listen right before it airs and is shocked to hear some of Bea’s revelations about Levi. It’s too late, it’s going live and Levi is left to hear from the recording that his girlfriend will never trust him. He’s hurt and she tries to explain that it doesn’t mean the end for them, but Levi can’t get her words out of his head. As he ruminates on them, he’s left distracted during a volley game, and Kyle’s face ends up taking the full force of Levi’s distraction.

Nicolette is a fun sponge

Nicolette is super excited about the upcoming volleyball competition and she offers to coach Chloe and Aaron. They have no idea how competitive she really is and readily sign up for her input. But they quickly realise their mistake as her evil competitive side emerges and they’re left regretting their life choices. She is not fun when she wants to win.

Hendrix and Mack give in to the truth

Hendrix comes clean to Mack about how he truly feels and at first she’s so taken aback, she doesn’t know what to say. He’s left a bit shaken by the fact his feelings are left hanging, but she just needs time to process. After a good gossip with Yashvi, she comes to the realisation – she has strong feelings for Hendrix too. Is she ready to tell him?

Toadie’s in a bit of a quandary. He’s enjoying how things are progressing with Mel and hints that he’d like to take things further, but a misunderstanding leads him to believe she’s giving him the brush off. He covers with his male pride, pretending he’s happy to keep it all a secret. But their secrecy causes a huge issue. Mackenzie knows something is going on with Toadie but isn’t sure what. When she hears he has a work meeting with Angelia Lane, she leaps to conclusions and tells Susan and Karl that Toadie is dating Susan’s adversary. Susan is shocked but decides to swallow her horror at Toadie’s romantic decisions for the sake of his happiness, and tells Angela she gives them her blessing. Bit awkward as Angela then thinks she’ll give things with Toadie a go and turns up at his house. Toadie is absolutely gobsmacked, but there’s more to come when the Kennedys invite her to dinner. Toadie will have to come clean about how wrong they’ve got it, but faced with the embarrassment, how will Angela react?

Ned to cheat on Yashvi?

Things are heating up between Ned and Sheila C when, during a moment discussing the design for the gallery, there’s a strong connection between them. They’re both left disconcerted by the sexual tension and try to brush it aside, and Yashvi has absolutely no idea what’s going on. She’s even growing closer to Sheila C herself. She starts gushing about her new friend to Ned, completely unaware she’s making him realise everything he likes about Sheila C. Is she about to lose her boyfriend to the newbie?

Scenes air from Monday 31st May on Channel 5.