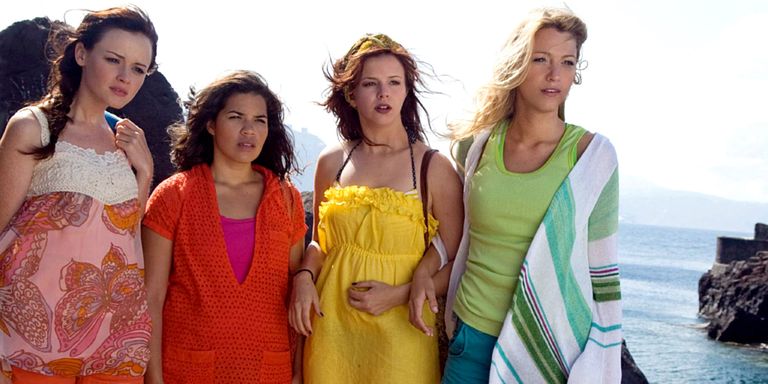 After year sof rumors, it looks like the world’s most beloved pair of blue jeans might be back for a three-peat.

On Thursday night’s episode of The Tonight Show Starring Jimmy Fallon, Alexis Bledel and Fallon chatted Gilmore Girls, season 2 of The Handmaid’s Tale, and our fantasy of a Sisterhood of the Traveling Pants reboot—and Bledel confirmed, a follow-up film has already been pitched.

The actress explained that since the first Sisterhood movie, she’s remained best friends with all of her onscreen “sisters”—Blake Lively, America Ferrera, and Amber Tamblyn.

“We don’t get to see each other a lot because everybody’s work or family and everything,” Bledel admitted when asked if she still keeps up with her former cast members. “But when everyone’s in town, we do [get together],” she added.

Starting the New Year off with blessings from my Sisterhood. We’ve got work to do for the next generation. Let’s get to it. #TIMESUP

Then, Fallon asked the question on all of our minds: Would they ever make another Sisterhood of the Traveling Pants installment, following the 2004 original and 2008 sequel? Bledel replied enthusiastically, “I really hope so—I would love it. It would be the best thing.”

Not only is The Handmaid’s Tale star amped to get the girl gang back together, she also divulged that the film is actually inching towards production.

“We just pitched a third movie,” Bledel dropped on Fallon. “I hope it comes together. It would be so great. I would love it.”

Divine Secrets of the Ya Ya AF @americaferrera while professionally editing you into this photo, I realized you have the coolest and most appropriate initials EVER! #BadassAF #SistersForever #tbt

It’s not the first time that Sisterhood fans have delighted in the prospect of a follow-up film. Back in 2016, Lively teased, “there might be a third.”

The All I See Is You actress said in a radio interview:

And Tamblyn dropped a similar hint to E! News the month prior: “I can obviously tell you that something is definitely in the works.”

Now more than ever, our fingers are crossed the magical pants can make a comeback.