Secret eater, 25, who spent up to £600 a month on takeaways loses 7st so that she wouldn’t be embarrassed about her weight when she went for a smear test

A secret eater who spent up to £600 per month on takeaways has dropped over seven stone after ditching her 4000 calorie daily diet.

Karla Nall, 25, from Wallingford, Oxfordshire, weighed a whopping 21 stone at her heaviest after becoming addicted to fast food.

But the retail manager – who scoffed up to 4,000 calories per day – would shamelessly lie about her diet ‘without realising’ and would spend no less than £150 per week on takeaways.

Karla decided to put an end to her bad eating in January this year, and has replaced her size 28 wardrobe with size 12 – and now weighs 13st 6lbs. 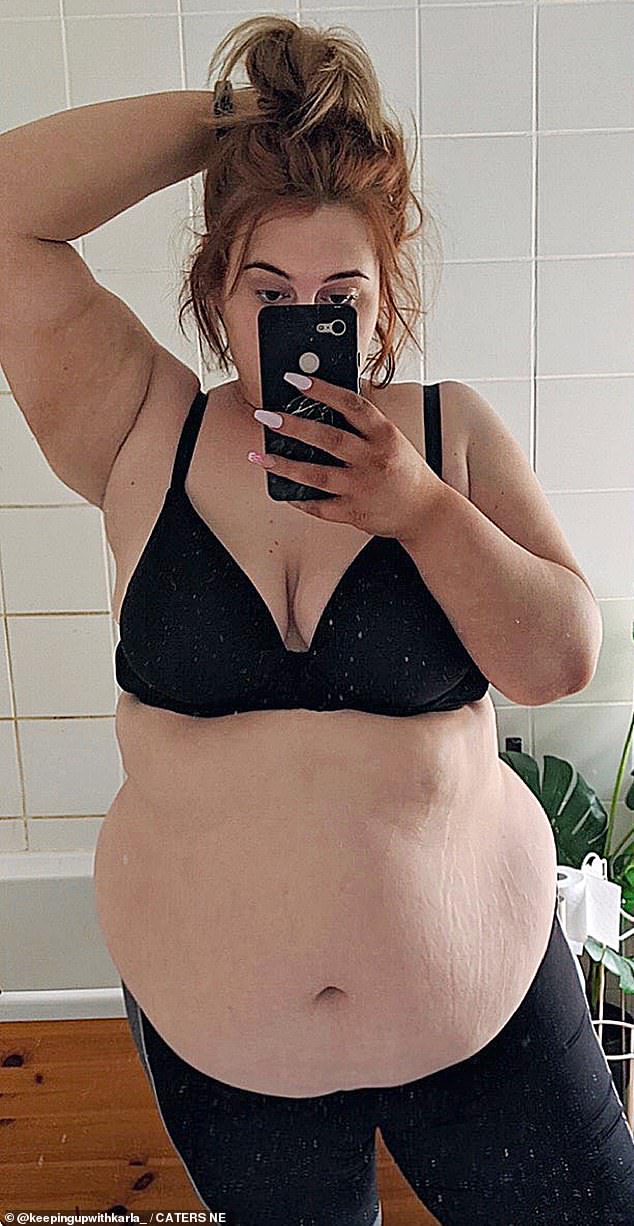 Karla Nall, 25, from Wallingford, Oxfordshire, weighed a whopping 21 stone at her heaviest  (pictured) after becoming addicted to fast food

Karla turned her life around and started calorie counting to help her drop seven stone. Pictured: Karla after her weight loss journey

Karla, pictured, would eat 4,000 calories a day but when asked about how much she was consuming she would lie ‘without even realising’ 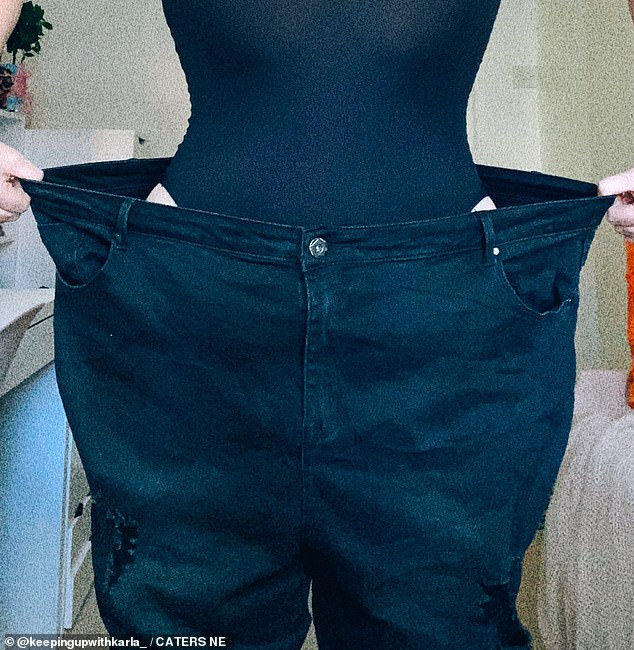 Since her dramatic weightloss, Karla has dropped from a size 28 to a size 12 and has had to replace her whole wardrobe which no longer fits her. Pictured: Karla wearing her old jeans

‘I’ve always been the bigger friend but my diet began to spiral out of control within the last five years,’ said Karla. ‘Whilst working long hours, I opted for quick, fast food rather than cooking.

‘I would order excessive amounts for breakfast and lunch from Greggs and order a Chinese or Pizza of an evening. But I wouldn’t tell anyone and hide the wrappers.

‘When friends would come round for dinner, I would always suggest a take-away and tell them I’ve not had one for at least a week.

‘I didn’t even realise I was lying at the time.’ 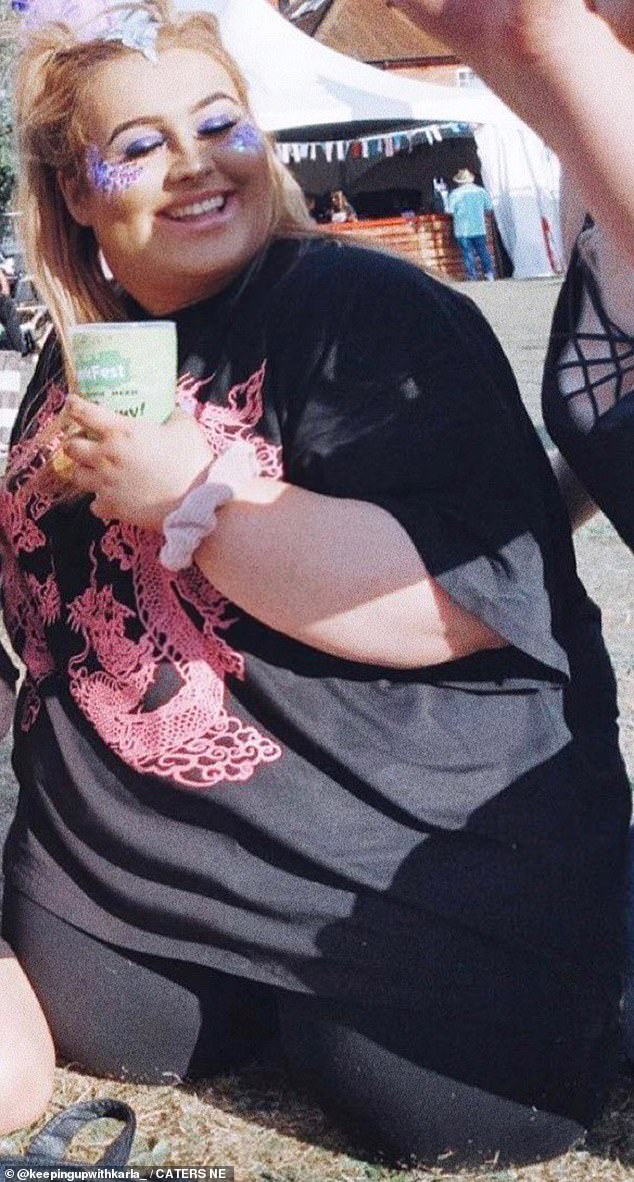 The 25 year old, pictured at her biggest, starting gaining weight when she was spending around £600 a month on takeaways and would lie about it 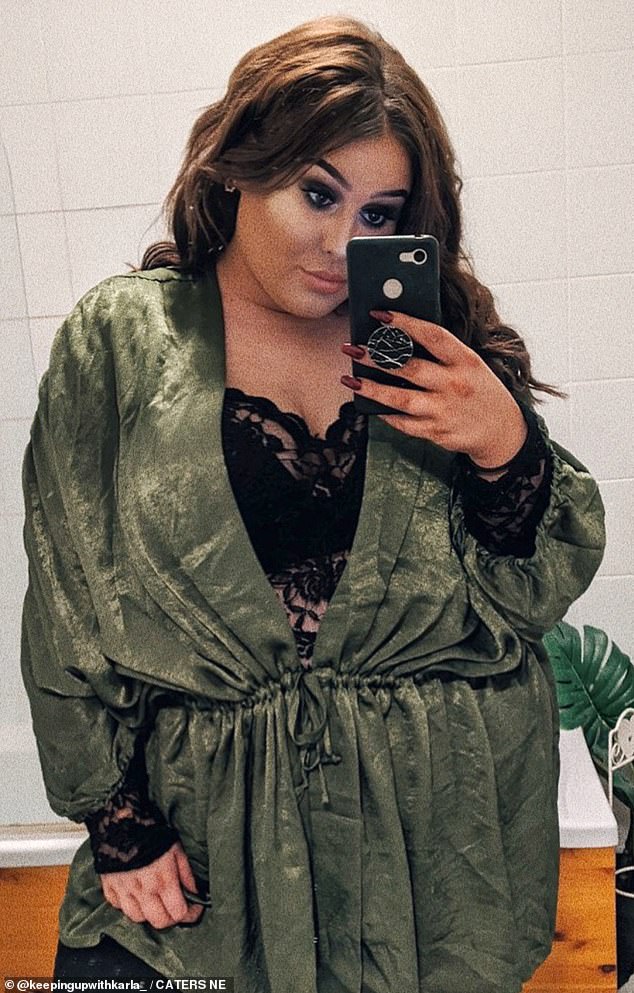 Karla, pictured, was leading another secret eating life where she would consume five takeaways a week and soon began to pile on the weight After always being known as the ‘bigger friend’ Karla, pictured now, decided to put an end to her bad eating in January this year

Breakfast – Bacon and sausage sandwich with a chocolate croissant from Greggs

Breakfast – Apple and an orange

Karla has lost an impressive 7st 8lbs in just ten months and would spend £150 plus per week on fast food.

‘I would always order enough for two people,’ she explained. ‘A typical order from a Chinese would be chicken balls, chips, chicken chow mien, prawn toast and chicken satay sticks.

‘I would eat until I was uncomfortably full and felt sick. Every night, I would feel horrendous and vow to never eat like that again.

‘My joints would ache but by the morning, I’d feel fine so I would do it all over again. I knew I was slowly killing myself but I couldn’t stop.’ 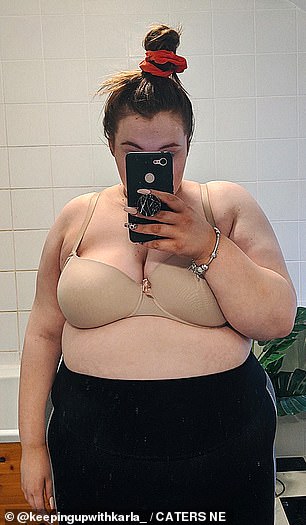 While she was working long hours, Karla, pictured, would opt for quick fast food rather than cooking herself something to eat 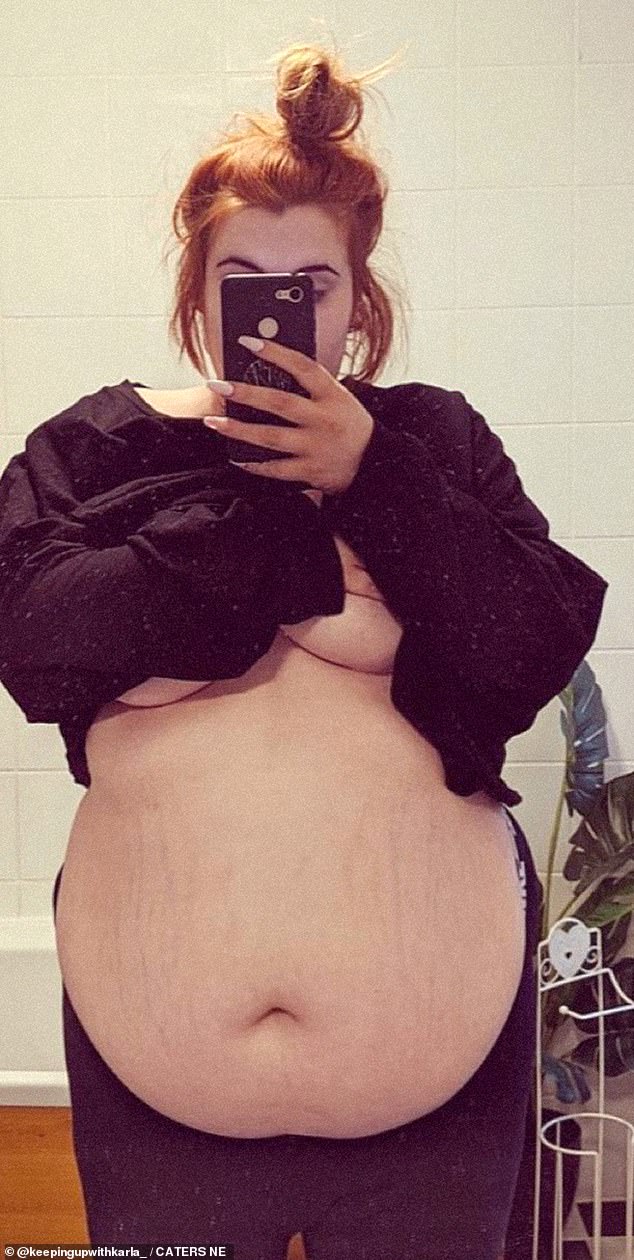 Karla, pictured at her heaviest, would order excessive amounts for breakfast and lunch from Greggs and order a Chinese or Pizza of an evening

Karla would always put off doctor appointments as her blood pressure was ‘worryingly high’.

But one appointment, she refused to put off was her smear test which prompted her to lose weight.

Karla said: ‘Being big has stopped me from doing so much such as working on makeup counters and finishing university.

‘I felt so insecure and didn’t like being around smaller girls. I rarely went to the doctors – even if I was really ill.

‘It was so embarrassing and I would feel so offended when they suggest I lose weight.’

To keep how much she was eating every day a secret from the people around her Karla, pictured before (left) and after (right) her weight loss wouldn’t tell anyone and she would even hide the wrappers When her friends came round to her house for dinner Karla, pictured, would find herself lying and telling them she had not had a takeaway that week when she was suggesting they get one 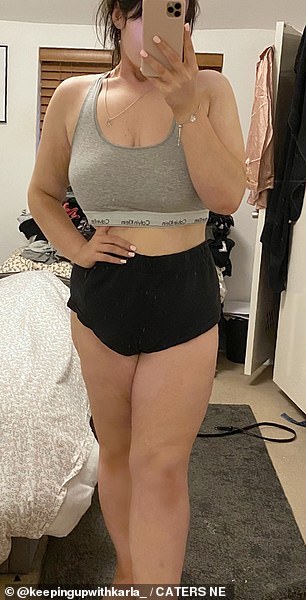 Karla joined Slimming World in January until August and has never looked back.

She now counts her calories on a tracking app and consumes 1,200 per day.

‘I was so motivated and refused to give up,’ she explained, ‘Even during lockdown, I continued to eat good and really enjoyed learning new recipes.

‘I feel like a new person – I am so positive and happy all the time. I have loose skin but I love my skin – it shows all the hard work I’ve put in to get where I am today.’

Karla used to hide under size 32 clothing to mask her size but now says clothes shopping is now her favourite thing to do.

She said: ‘I disrespected my body for so many years and hid under baggy clothing.

‘But now, I can go into any shop and buy clothes without having to look in the plus size section. It is the best feeling in the world.’ 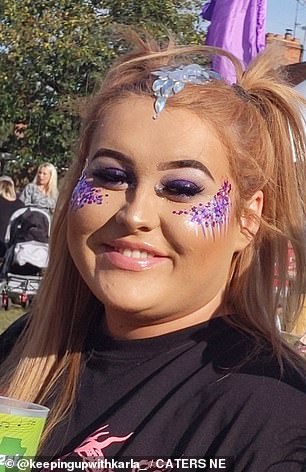 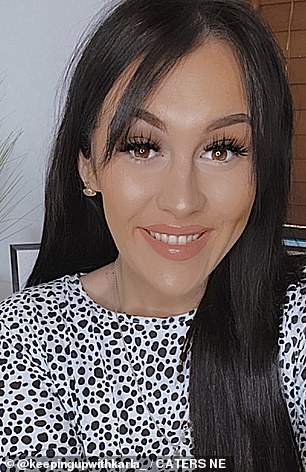 When she was at her heaviest Karla, pictured before (left) and after (right) the weight loss, admits she would eat until she felt uncomfortably full and would often feel sick as a result