Today in WTF news, Jersey Shore’s Ronnie Ortiz-Magro is feuding publicly with his girlfriend Jen Harley just weeks after the pair welcomed their daughter into the world! Because why argue in real life when you can argue all over Instagram Stories, right?

Ronnie started the drama over the weekend, posting, “Note to self, can’t turn a natural born HOE, into a HOUSEWIFE, if you find them in the gutter then leave them in the gutter. Not all people can be saved when they are so far gone. All you can say you did ur best and keep it moving.”

He also accused Jen of keeping “sex videos” of her ex, and engaged fans in a poll on the subject, saying “If your significant other keeps sex videos of their ex, shouldn’t they show enough respect to delete them, esp after being in a new relationship for over a year? #GiveMeYourThoughts.” Modern love, ladies and gentleman!

Ronnie had told People that he and Jen were “in talks” to get engaged, though last week’s episode of Jersey Shore Family Vacation implied that Ronnie was still in love with Sammi, so who knows WHAT is happening. Hopefully these two figure things out for the sake of their daughter, and for the sake of their matching Yankees outfits: 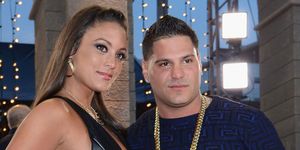