The Reserve Bank is expected to break from history and inflict a fourth successive monthly increase in interest rates on the nation’s home buyers despite signs its aggressive tightening of monetary policy may be slowing the jobs market.

As new price data showed a further lift in inflation through July, economists are predicting the RBA board will use its monthly meeting on Tuesday to lift the cash rate by another half a percentage point to a six-year high of 1.85 per cent. 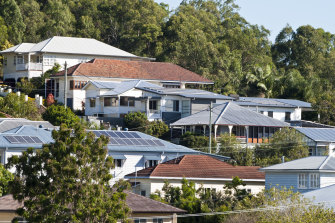 The RBA’s interest rate hikes will add hundreds of dollars a month to household mortgages.Credit:iStock

It would be the first time the bank has lifted interest rates at four consecutive meetings since the introduction of the RBA’s 2 to 3 per cent inflation target in 1990. If it goes through with the rate rise, it would take to $770 a month the increase in the repayments on an $800,000 mortgage since May.

But there are indications the lift in rates is starting to have an impact outside the housing market.

ANZ’s closely watched measure of job ads fell 1.1 per cent last month, taking the annual rate of growth down to 15.6 per cent, its slowest pace since the middle of last year.

ANZ senior economist Catherine Birch said the fall in ads might be a sign the jobs market was past its peak.

But she said unemployment would probably continue to fall, possibly below 3 per cent, due to the ongoing demand for staff in many businesses.

“Even if labour demand growth is starting to ease, we don’t think that will translate immediately into rising unemployment and underemployment,” she said.

There are also signs of softness in manufacturing, with the Australian Industry Group’s performance index for the sector falling by 1.5 points in July.

Measures for production, employment and supplier deliveries all edged down last month.

The RBA believes the jobs market can withstand higher interest rates, which it is pursuing to quell inflationary pressures across the economy.

The Melbourne Institute’s monthly measure of inflation, released on Monday, showed a further 1.2 per cent increase in prices through July. It was the largest one-month jump in prices since September 2002.

The institute’s monthly measure of underlying inflation, which excludes one-off price jumps, increased by a further 0.9 per cent last month, taking the annual rate to 3.9 per cent.

But inflation pressures due to high petrol prices appear to be abating.

Since their most recent peak of 211.9¢ a litre for the week ending July 10, the national capital average price has tumbled to 173.6¢ a litre. That’s the cheapest average price since April when the federal government’s 22.1¢-a-litre fuel excise cut was fully passed through to motorists.

CommSec estimates the average family is spending $254.83 a month to fill up a car with petrol, a drop of more than $43 from the peak in March.

Despite the saving, average family petrol costs are still $33 a month higher than at the start of the year.

Prices for houses are also continuing to fall, with CoreLogic’s measure of values showing a 1.3 per cent decline in July. It was the third successive monthly fall, coinciding with the RBA’s increase in interest rates.

But independent economist Stephen Koukoulas said while interest rates had a short-term effect on house prices, it was minimal in the longer term.

“In the long run, they make zero difference to house prices,” he said.

Koukoulas said between 2002 and 2008, when the RBA lifted rates by 3 percentage points, house prices went up by about 35 per cent across the country and more than 100 per cent in Perth.

An economic boom and strong employment helped lift prices during that period, he said, and the unemployment rate was still an important driver of house prices.

“At the end of the day, it’s the health of the labour market, it’s demographics relative to new supply,” Koukoulas said.