A film festival is about more than just the films and the festival center. It is about the location, the journey, the experience. Here on Deadline we’ll be bringing you updates on what it’s like to be on the ground at the inaugural Red Sea International Film Festival, Saudi Arabia’s first ever film festival.

The Red Sea International Film Festival (Dec 6-15) kicks off tonight in Saudi Arabia’s port city Jeddah with Joe Wright’s Cyrano and while the festival has already drummed up a lot of conversation in the international film industry, what is it really like travelling to Saudi Arabia’s first-ever film festival?

There’s no doubt Saudi Arabia has long had a reputation for being one of the most patriarchal and conservative nations in the world and, as a Western woman, it’s hard not to be slightly anxious about what would lie ahead for me during my first ever visit to the country. Indeed, women were only permitted to drive from June 2018. That’s just a few months before my now three-year-old daughter was born, a staggering concept for me to digest. 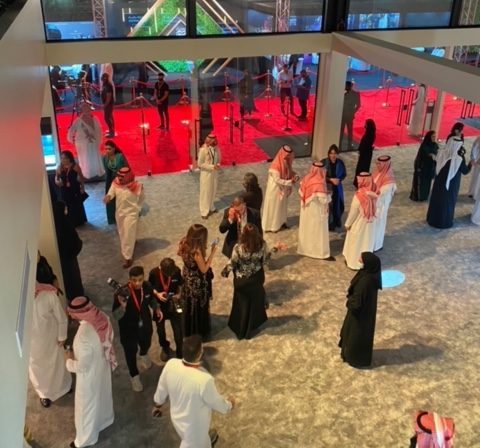 RSIFF will be the first major festival to go ahead after the new Covid variant Omicron has been discovered. I arrived at Heathrow’s Terminal 2 Sunday evening and it was fairly desolate. I got through check-in and security very quickly and staff at the airport told me it was unusually quiet. I needed to follow all the now-customary travel protocols to enter Saudi Arabia, including proof of vaccinations (which had to be uploaded to a Saudi Arabian website called Muqeem) and a negative PCR test, in addition to needing a visa to enter the country.

My six-hour flight from London to Jeddah was smooth. I spent a large portion of the journey wondering what exactly would lie ahead in the next week. One only has to Google ‘Is Saudi Arabia a safe place to visit?’ to get a rather ominous message, warning foreigners to think twice about traveling as a tourist. What would be the major cultural issues that we would face? Would I have to dress very conservatively? Will there be any censorship of the movies? What would the festival events be like? Saudi Arabia forbids consumption of alcohol so the receptions so often associated with top-tier festivals like Cannes and Venice would have a different flavour.

When I arrived in Jeddah during the early hours on Monday morning, the first thing that struck me was how kind and helpful the staff at the airport were. None of the usual panic that has been so often the case in international travel since the pandemic struck. I was also hugely surprized by the number of women working at the airport. I would venture to say that every customs desk was run by a woman. I would later learn, from a Saudi native and festival delegate at my hotel, that this is a huge change in the culture and that, even five years ago, none of these official positions would be held by a woman. 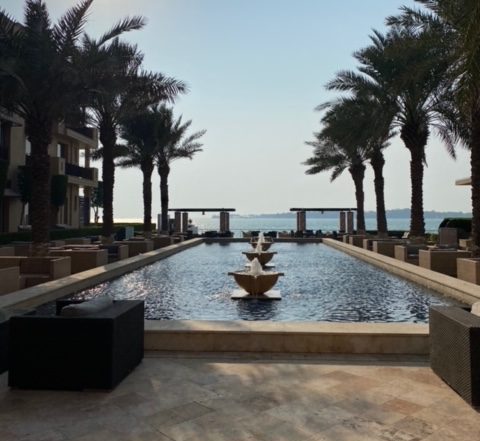 Security was thorough. I had to give my fingerprints for both hands in addition to having my photo taken before I was led through to where RSIFF staff were waiting for me and my colleague. What also struck me is how friendly, young and polite these staff members were. Their excitement for this imminent festival was palpable as they ushered us into our private car.

Indeed, all of the festival staff members I have met so far have been very friendly and eager to help (even if they don’t seem to know the answers to many logistical questions). There are a lot of women working at this festival, another welcome surprize. Notably, many staffers I have met come not just from Saudi Arabia but are also natives from places like Lebanon and Egypt who have been brought in to work alongside the locals.

As to be expected with any first-time festival, there have been some initial teething problems. For instance, the Tawakkalna app (Saudi Arabia’s Covid-19 app which you need to enter various venues around the country) that all delegates were told to download in advance of the festival has been hard to access for a number of journalists. 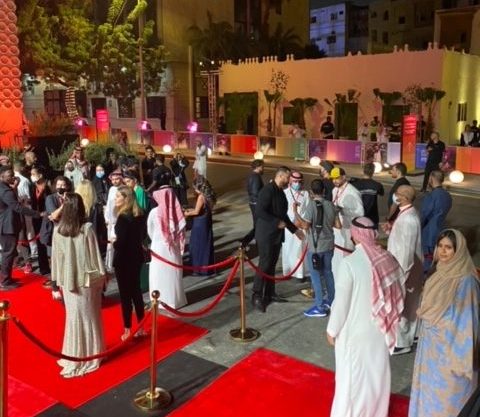 Wi-Fi in the Park Hyatt Hotel, one of the festival’s major hotels, was down for a number of hours on Monday (much to this journalist’s dismay). Even Wi-Fi at the Red Sea Gala Theatre, which was specially constructed for the festival in the city’s 1,400 historic quarter Al-Balad, has been very patchy. Roaming charges are very expensive out here and reception seems to dip in and out unless you have a local SIM card, which seems to make communication at times pretty tricky.

When I waited in the foyer to be picked up for the Opening Night ceremony, I couldn’t help but notice a number of local women headed to the event were wearing sleeveless dresses, a genuine surprize. Many people I have spoken with keep telling me the same statistic: two-thirds of Saudi Arabia’s population is under the age of 30 and it’s the youth that will be driving change within the country. There is a real sense of a willingness to change the world’s perception of Saudi Arabia as a deeply patriarchal society. Will the Red Sea International Festival be the first major film event to put a spotlight on this desire? Let’s wait and see.