When the first witness at the Victorian government’s inquiry into the state’s COVID-19 hotel quarantine scandal starts talking on Thursday morning, it will have been 40 long days since Premier Daniel Andrews first announced the probe.

Each day in this pandemic feels like a month – that’s what the Premier always says – but time goes by all the more slowly when you don’t feel you’re getting the full picture.

So if this inquiry, which is due to report on September 23, was an exercise in kicking the can down the road to a point where the story is old news, it hasn’t worked.

As Victoria’s second surge has escalated to horrific levels and with the state on the brink of an even tougher lockdown, the desire to know how we got here is stronger than ever. 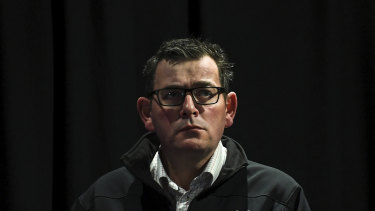 Another notion that hasn’t been proven but has also stuck fast is that every one of the cases of the virus in Victoria’s second wave can be traced back to hotel quarantine.

Sutton famously said that was conceivably true, with Coate’s counsel assisting, Tony Neale, taking those words and running with them in his opening statement to the inquiry on July 20. But we don’t really know.

That’s because the genomic sequencing, the viral detective work that can trace the exact route of the spread of COVID-19 cluster or outbreak, has not been publicly released by the Doherty Institute, the world-class Melbourne research facility that has done the work

The institute has cited the inquiry as the reason for not releasing the data.

Nor has the real time genomic sequencing believed to be in use by Sutton’s team been made public – the Chief Health Officer says the data is not his to release.

It’s all in stark contrast to NSW, where authorities speak freely and in detail of their use of genomic technology as a valuable tool to identify the origins of clusters and outbreaks.

Talking of Victoria’s northern neighbour, when NSW Premier Gladys Berejiklian called an inquiry into the Ruby Princess scandal, witnesses were answering questions on live TV within seven days, not 40.

That’s not the only reason Berejiklian is travelling well through this stage of the pandemic while Andrews is besieged by critics; the NSW Premier hasn’t had to report more than 700 cases in one day with 13 lives lost.

But the contrast in approach cannot be ignored.

In the end, the long gap between calling for the inquiry and reporting its findings may have another unpleasant consequence for Andrews and his government.

It may have given people ample time to believe everything they have heard and make up their minds about who was to blame.

Get our Coronavirus Update newsletter for the day’s crucial developments at a glance, the numbers you need to know and what our readers are saying. Sign up to The Sydney Morning Herald’s newsletter here and The Age’s here.