A four-bedroom Port Melbourne fixer-upper failed to get a bid from a buyer at a packed auction on Saturday, but after the property passed in, a few came forward to try to negotiate a deal.

The home at 59 Poolman Street, which has been owned by the same family for almost 70 years, had only one vendor bid of $1.8 million – at the bottom of the $1.8 million to $1.98 million price range. 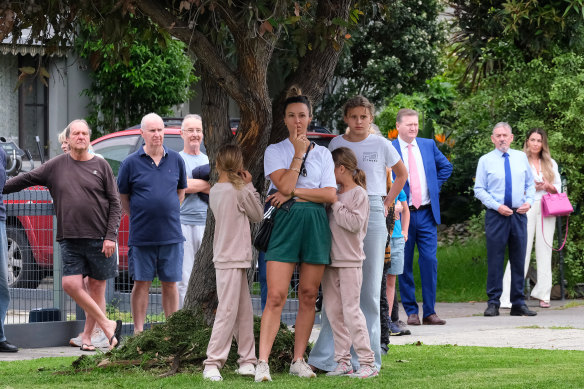 A crowd gathered to watch the auction, but didn’t make any offers until after it.Credit:Luis Enrique Ascui

Though the property, part of the ‘Bank House Estate’, had not sold before publication, Home AU Real Estate director James Vakrinos was confident it would sell within the next day or so after one buyer made an offer above $1.8 million.

“There’s two or three parties showing some interest because this property is a very unique property,” Vakrinos said. “And 12 months ago it would have sold under the hammer for the low-to-mid $2 millions.”

Vakrinos said despite a crowd gathering for the auction, buyers were still showing a bit of fear of upcoming interest rate rises, reducing their borrowing power compared to a year ago.

Fixer-uppers are having a tougher time at auction since COVID-19 hit, as building material shortages and a lack of trades has made renovations far more expensive.

The Port Melbourne auction was one of 873 scheduled on Saturday.

In Fitzroy North, a six-bedroom Victorian home at 12 Mark Street, known as Marianella, sold under the hammer for $3.69 million – just over the $3.3 million to $3.6 million range.

Three bidders competed for the property, with a young professional athlete becoming the new owner. Nelson Alexander Fitzroy selling agent David Sanguinedo would not reveal who that mystery athlete was.

Bidding opened with a vendor bid of $3.3 million, with a flurry of offers taking it quickly to its selling price.

“It felt like old times,” Sanguinedo said of the auction, which had been far more active than many during Melbourne’s recent downturn. “It really shows that good quality properties underpin this market. They’re the ones that are selling.”

A beautifully renovated three-bedroom home at 7 Stranks Avenue, Brunswick West also sold under the hammer for $1,155,000, some $55,000 above its reserve.

Ray White Brunswick selling agent and auctioneer Alex Ilyin said the home, which had been used as an investment, had four active bidders competing for the keys.

They were mostly professional couples looking for their second home.

“We have a lot of young professional couples looking to upsize from a one or two-bedroom apartment,” Ilyin said. “Polished products that are finished well are performing very well.

“People are wanting to avoid any type of renovation due to the costs of materials and tradespeople.”

Not too far away in Abbotsford, a three-bedroom home, which had one bedroom on a mezzanine level, passed in. It eventually sold for $1.37 million in post-auction negotiations.

The home at 78 Yarra Street passed in on a bid of $1,367,500. Jellis Craig Fitzroy partner and auctioneer Lee Muddle said the buyers and the underbidders were both young couples.

Bidding opened on a lowball $1.27 million, with the two interested buyers taking it quickly to $1.4 million.

However, the offers soon slowed, with the property passing in to one of the young couples who made the highest bid.

“It really just depends on the property at the moment, whether it sells on auction day or passes in and sells,” Muddle said.

In Richmond, two similar, but different houses on the same street sold one after the other at auction.

The other, a two-bedroom Victorian with a white picket fence at 121 Buckingham Street, sold for $1.4 million – at the top end of its $1.3 million to $1.4 million guide.

The home had been in the same family for 25 years after the current vendor, who was now looking to upsize, bought the home from their sister previously.

Both families had renovated and refurbished the home, to make it a desirable ‘turn-key’ home, Jellis Craig Richmond director and auctioneer Elliot Gill said.

Two bidders also competed for the property, with one bidding on the phone while they were at work.

The buyer was an owner-occupier, who was bidding from the street, Gill said.

Some first-home buyers were looking at homes priced in the low $1 million range, though their budgets had been cut since interest rates rose.

Most Viewed in Property