From wind chills near 60 below zero in the Upper Midwest to an ice storm all the way to the Gulf Coast, it is rare that winter weather gets this extreme. The culprit is a polar vortex teaming up a very active jet stream.

That means cold, snow and ice for hundreds of millions of Americans. 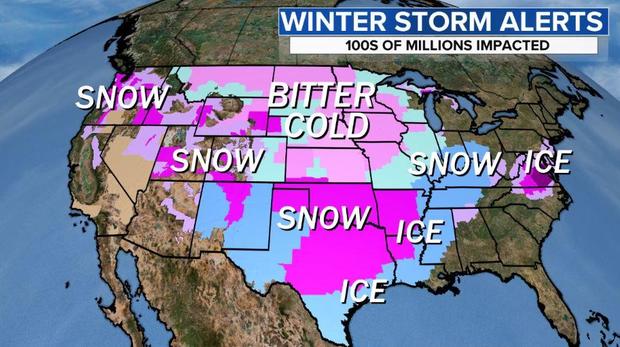 A few weeks ago, the polar vortex, which is typically located near the North Pole, broke into pieces — a natural occurrence that happens every couple of winters. Smaller daughter vortices scattered around the Northern Hemisphere, bringing pockets of Arctic air to Siberia, Europe and North America.

For the past week, one of the daughter vortices has set up shop, spinning near the U.S.-Canada border. As a result, temperatures have been frigid, at times dropping below -40 degrees Fahrenheit, but the coldest of air has been confined to the far northern U.S. That’s about to change as lobes of the vortex rearrange its orientation, sending cold air south.

Amidst this extreme February pattern, one of the wildest #Fujiwhara interactions I’ve ever seen! pic.twitter.com/HzocSrUtme

Over the coming days the vortex will act as a catapult, slingshotting systems around it’s circulation, day after day, from coast to coast. As storms wind up, it will progressively draw the cold air further south. 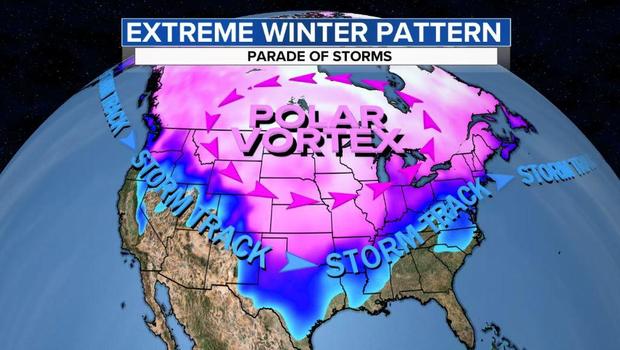 By Sunday and Monday the bitter cold air currently over the Northern Plains will plunge to the heart of Texas, bringing with it wind chills below zero. The image below traces the origin of the cold air from the Arctic Ocean, down through Canada and southward through the U.S. Plains.

In case anyone was wondering where the cold air was coming from…..the Arctic.

The Arctic is bringing the cold air. pic.twitter.com/Xu6cjDXUEh

Temperatures will be dangerous. On Sunday morning in North Dakota, Minnesota and Wisconsin wind chills will bottom out in the -40 to -60 degree Fahrenheit range.

Lows will drop below zero from Saturday to Tuesday morning in Kansas City, possibly dropping as low as -15 on Monday or Tuesday morning. With the wind factored in, wind chills Sunday, Monday and Tuesday mornings will range from 20 to 30 below.

Even Dallas Texas will experience feels temperatures well below zero on Monday and Tuesday morning. Actual temperatures will be 50 degrees below normal by Monday morning in much of Texas and Oklahoma. 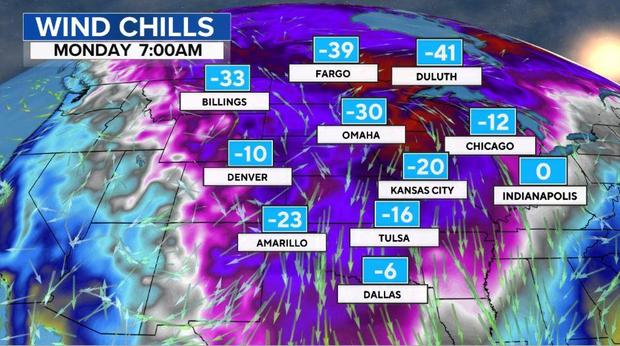 Normal high temperatures this time of year range from 55 in Oklahoma City to 60 in Dallas. Instead, on Monday, temperatures will struggle to rise above the single digits, an astonishing 50 degrees below normal. 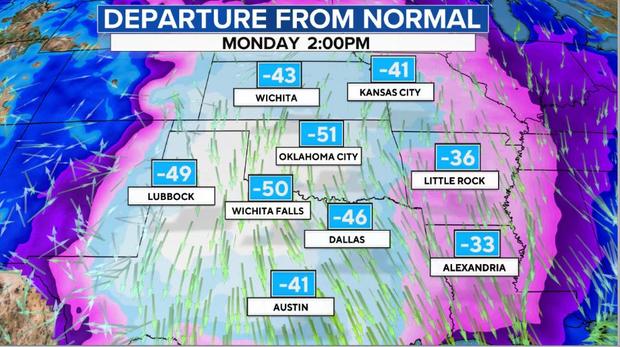 Despite being extreme, it’s not nearly as extreme as it could be. Over the past few decades, due to human-caused climate change, the coldest extremes are getting less extreme. As one example, in Minneapolis the coldest day each year is now 12 degrees warmer than it used to be. 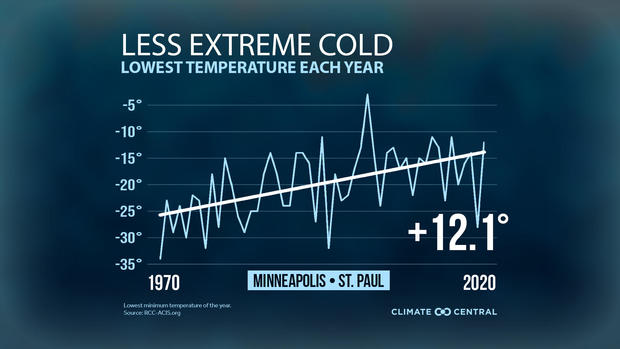 Bitter cold air is only half of the concern. A parade of storms is moving across the nation this weekend. Snow and ice accumulations will cover more than half the nation and stretch from coast to coast. 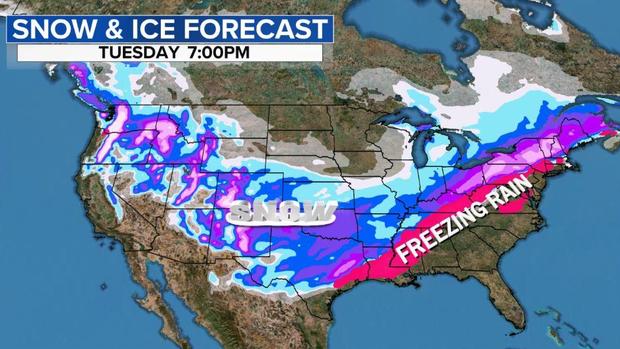 In Seattle and Portland, several inches of snow is piling up with a season’s worth of snow in 24 hours expected in Seattle. It could be one of the snowiest storms since 1985.

That same storm will dip south across the Rockies producing powder for skiers on Saturday night. On Sunday, places that rarely get significant snow like Oklahoma and Texas will get dumped on. A general 5 to 10 inches are possible from Oklahoma City to Dallas, with snow falling further south into Austin.

As the cold air meets up with moist Gulf of Mexico air an ice storm will break out down to the beaches on the Gulf Coast from Corpus Christi and Houston to Lake Charles, Louisiana. This ice storm will translate northeast across Jackson, Mississippi, and into Tennessee on Monday, with a sheet of ice an inch thick making for dangerous travel and widespread power outages. 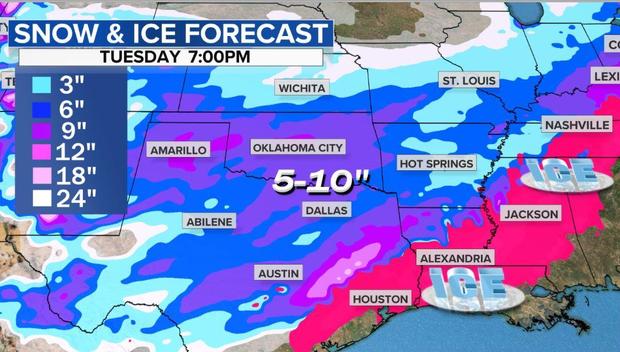 That storm will enter the Ohio Valley, Mid-Atlantic and Northeast Monday night and Tuesday. Here precipitation will run the gamut from rain and ice near the coast in places like New York City and Boston, the heavy snow in Ohio, western Pennsylvania, Upstate New York and New England. 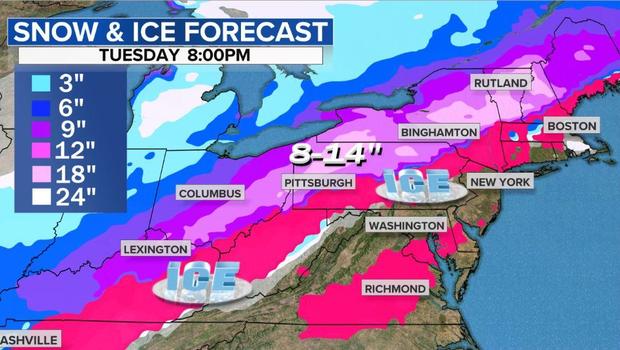 Later in the week the pattern will begin to gradually moderate as the polar vortex loses its grip.