‘I thought… this is a cult’: Religious people who stopped going to church reveal reasons why they will never go back – from discovering their priest was a child abuser to a crisis of faith

People who used to regularly attend religious services have opened up about why they stopped going and will never go back.

Reddit user u/seventeencans kicked off the thought-provoking conversation about religion earlier this week by asking one simple question: ‘When did you stop going to church?’

Christians, Jews, Muslims, and Mormons were among the respondents, and their answers ranged from broad to specific, with one person admitting it just got in the way of ‘brunch.’ 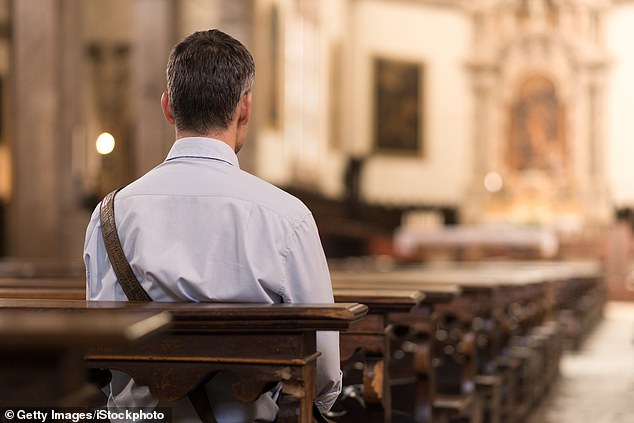 Over it: Reddit users have revealed why they’ve stopped attending religious services and will never go back (stock image) 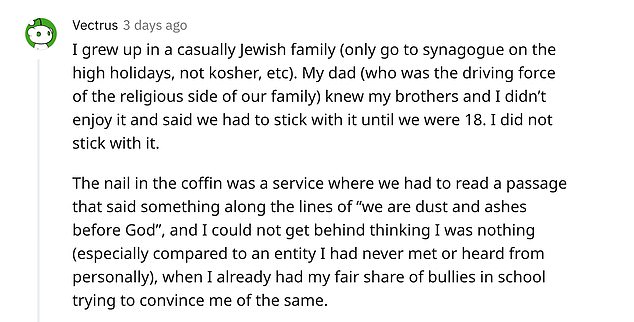 Inclusive: Christians, Jews, Muslims, and Mormons were among the respondents who opened up about their decision to stop attending religious services

A number of lapsed Christians named the child sex abuse scandals that have rocked the Roman Catholic Church in recent decades.

‘My spouse was raised Catholic, she’d go to church at least once or twice a month, and would feel guilty if we didn’t go for longer than a month,’ one Reddit user explained. ‘Then the pedo scandal happened and she’s had zero interest. She still has her faith in God and Jesus, but has none in religion as an institution. Which is pretty much where I always was.’

Someone else commented: ‘After the pedo scandal I started questioning myself and my relationship with Church and just sort of opened my eyes to all the problems behind that institution…’

‘The priest I confessed my sins to was a kiddie diddler and fled the country,’ another wrote, adding: ‘I couldn’t in good conscience be associated with a religion who refused to protect its own children.’

Hypocrisy was widely mentioned in the comments, with some noting that only ‘certain’ people are welcome in most religious communities.

‘I started to realize the teachings of the church weren’t Biblical,’ one person shared. ‘Every Sunday the pastor would talk about righteousness that was really nationalism, and being free from those who are filled with sin, but very specific sin.

‘We had divorcees in the church and overt racists, but not gay people or former inmates. There were teachings of love, but it was very clear that love was only meant for certain people.’

‘My father lost his job and the only work he could get involved travel, which meant he couldn’t make the Sunday service,’ someone else recalled. ‘Even though my parents gave to the church monthly, all the support we got was “prayers that he found a job closer to home.”

‘As a teen I was also asked by church elders why [my]. father thought making money for his family was more important than attending the church.’

Many Reddit users took issue with how members of the LGBTQ community are treated by some religious sects.

‘I was introduced to the first gay person I had ever met and he was…great? Like a good, kind, caring human who lived a good life,’ one person explained.

‘And I started thinking about how the church that I had been part of for the first 17 years of my life always taught me that homosexuality is a choice, and a mortal sin and it just seemed…wrong. So I decided that the institution of Catholicism was not for me and I never explored any other religions.’ 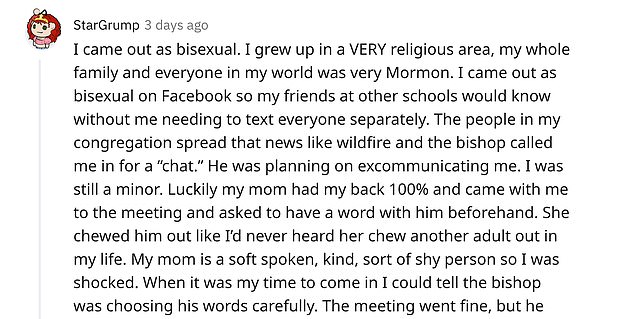 Hard to handle: Some realized they were in a ‘cult,’ while others noted that only ‘certain’ people are welcome in most religious communities

‘Grew up in a Christian cult, the kind that shunned family that stopped believing, and thought the only possible way to be saved from the apocalypse was to be an active member of their specific religion,’ someone else said.

‘The thing that woke me up from it all was just kinda getting to know people. I got to know gay/trans/atheist/pagan people I worked with, and they were every bit as compassionate, intelligent and honest as the people in my church.’

The term ‘cult’ came up in more than a few posts in the thread.

‘I moved to a new city for university and was doing a bit of church hopping with a religious roommate to see if we could find a church we liked. At one of the churches I had a “once you see it, you can’t unsee it” moment where I suddenly thought… this is a cult,’ one person recounted.

‘The church we went to was a really boisterous hallelujah type place and it was very overwhelming so I had gone to the bathroom to try and avoid a full blown panic attack. When I was in there a few ladies crowded me and were saying I should take the panic as a sign that the Lord was flowing through me.

‘Like… no this is anxiety, it’s a physiological thing. They really, earnestly believed that I was being touched by Jesus and I couldn’t help but feel like they were brainwashed. It was so awkward and off-putting I lost my faith and haven’t really gone back since.’ 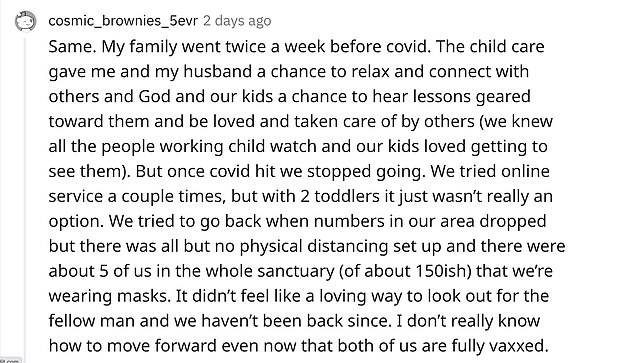 Outraged: A few people admitted that they gave up going to church because of how lax their places of worship were about wearing masks during the pandemic

Many people shared that they stopped going to religious services as soon as they were old enough to make decisions for themselves.

‘I grew up in a casually Jewish family (only go to synagogue on the high holidays, not kosher, etc). My dad (who was the driving force of the religious side of our family) knew my brothers and I didn’t enjoy it and said we had to stick with it until we were 18. I did not stick with it,’ one person admitted.

‘The nail in the coffin was a service where we had to read a passage that said something along the lines of “we are dust and ashes before God,” and I could not get behind thinking I was nothing (especially compared to an entity I had never met or heard from personally), when I already had my fair share of bullies in school trying to convince me of the same.’

A few people admitted that they recently gave up going to church during the COVID-19 pandemic and won’t be back because of how lax their places of worship were about wearing masks.

‘I literally just quit my church. We haven’t been in months because of the pandemic, but there was a thing for kids mine wanted to do. I can drop them off outside but for security reasons, I have to go in to pick them up,’ one parent griped.

‘None of the staff or other parents were wearing masks, they did not require it of the children, and no one was distancing at all. It was like 600,000 haven’t died in the last year from a contagious virus. I lean toward liberal anyway, but this was just it. How arrogant and hypocritical are you to mill about spreading the message of caring about others when you can’t be bothered to protect them from yourself?’