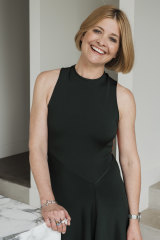 Kellie Hush is stepping away from The Way.Credit:James Brickwood

Six months after launching with all guns blazing, former Harpers Bazaar Australia editor-in-chief-turned-purveyor of budget handbags Kellie Hush has quit the start-up she had been so enthusiastically spruiking.

Friends say Hush had a major personality clash with her silent investor partner, who PS can reveal was Justin Davis-Rice, the man who controversially dumped Elle Macpherson from the Bendon lingerie brand several years ago.

In her place, Rice-Davis installed German supermodel Heidi Klum, setting the scene for a decade-long lingerie battle between the veteran supermodels.

However, a year ago it was Hush who was being groomed by the ragtrader in an ambitious plan to launch a chain of discount handbag and accessories stores called The Way, which would also feature a major online presence.

PS understands Hush, who declined to be drawn on her departure this week, had invested a six-figure sum in the new business. Hush and Rice-Davis are understood to have completed their financial settlement only days ago.

It was nine months after Hush shocked the fashion world with news she was voluntarily walking away from Harper’s that she revealed to PS in May she would launch her own brand of ‘‘accessibly-priced’’ fast-fashion accessories.

She had plans to open five stores by the end of last year in malls across Sydney, and more stores around the country in the months to follow. But as the months dragged on, those ambitions were not realised.

Hush had set her sights on taking a significant chunk of Lovisa’s market share, as well as Zara, Top Shop, H&M and all the other fast-fashion retail juggernauts that have transformed the Australian apparel market over the past five years.

‘‘Look, I love fashion and I love luxury, it’s been such a privilege and an education to be immersed in that world, but to be honest I’m just a girl from Canberra who took the Murrays bus to Sydney seeking the bright lights,’’ Hush told PS at the time.

‘‘I’m still very much that girl, but I know a lot more now about trends, imagery and the world of fashion. That’s where my heart is, and where my focus is with this venture, to create a range of accessories, handbags and jewellery that is competitively priced and encapsulates all the knowledge I have gathered from my decades in the fashion world … filtering high fashion down to the street level. 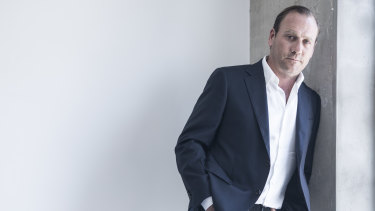 Justin Davis-Rice was the secret investor and partner for The Way.Credit:Nic Walker

‘‘I’m sure a lot of my peers would be surprised that I would be jumping into fast fashion, but to me it’s a world I know very well. It’s where I came from.’’

Hush said she had secured the backing of a wealthy silent partner for the new venture, to be called The Way, and was in talks with one of Australia’s major department stores – David Jones – to stock the brand.

Hush turned up to the David Jones launch party on Wednesday night, though she was carrying a rather more expensive Louis Vuitton handbag rather than one of the $40 jobs she was selling through The Way.

Hines’ time to hide and shine

She won’t be on stage for most of Shrek The Musical, but Marcia Hines says she intends to keep the ‘‘showbiz’’ alive as she provides the voice for the giant dragon that stars in the production which takes centre stage at The Lyric Theatre in January.

Hines spends most of the show in a special booth with monitors, keeping a close eye on the four puppeteers who control the giant Dragon and make sure Hines’ lines and lyrics are co-ordinated exactly with the giant creature that they bring to life. 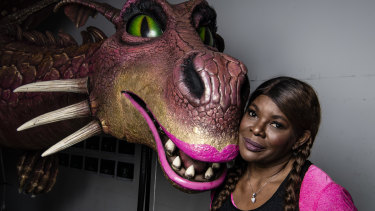 Marcia Hines is the voice behind the dragon in Shrek the Musical.Credit:Louise Kennerley

‘‘I’ve never really done anything like this before, and the guys in the costume are incredible,’’ Hines told PS on Friday during final rehearsals.

‘‘There is one who handles the mouth, and that’s the key one for me. I have to keep a close eye on the movements and he has to listen to my voice to keep it all in sync.’’

So will she be able to wear tracksuits and no makeup during the show?

‘‘Oh no, honey, it’s still showbiz. You always gotta keep up the appearance, and I perform the final act on stage, so the audience gets to see me!’’

Those were the days, my friend

What thin skins those supposedly tough, no-nonsense South African retailers apparently have.
PS was left off the guest list of Wednesday night’s big David Jones launch party, which was to unveil its ground floor revamp at the store’s Elizabeth Street flagship.

I called to find out why your columnist had not been invited to document this auspicious new chapter in Sydney’s oldest and grandest department store.

Indeed, I’ve been writing about David Jones — and its various incarnations — for nearly as long as the store’s current Melbourne-based publicist Prue Webb has walked the Earth.

She bravely explained that after my coverage of the store’s shambolic fashion floors launch — where lost models were coming off escalators in all directions and VIPs were being herded like cattle around racks of bras and knickers — that perhaps I would not enjoy myself.

Oh contraire! I hear that even as Sydney choked on unprecedented bushfire smoke, there was a champagne tower and a caviar bar in action.

As for the guest list, it largely comprised 20-something social media influencers, most of whom those who shop at DJs have never heard of.

A plane load of ‘‘VIP customers’’ was also shipped in, seemingly from Shenzhen and wearing every luxury brand known to man — all at once. Seriously?

On Thursday, PS ventured into the gleaming new ground floor for a first-hand look.

There is no denying it has all the charm of an endless Dubai shopping mall. There are huge luxury outposts including Gucci and Louis Vuitton erected within the store, not dissimilar to the same outposts at Westfield.

Sadly, there appears little of the old David Jones identity, which goes beyond houndstooth livery. There’s also a history of polished service and understated elegance that has underscored the store for years.

The only vestige remaining of the old David Jones store was Michael Hope, the much-loved piano player, who along with his Steinway has thankfully been retained. 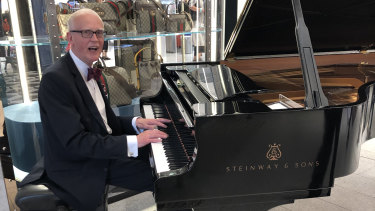 As times change at David Jones, Michael Hope and his Steinway remain a constant.Credit:Andrew Hornery

The DJs executive team might like to know it was PS who saved that piano the last time the corporate overlords opted to tinker with our social and shopping icon.

Let’s hope they get the new food hall right. 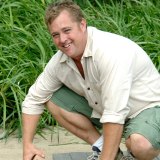 After a 20-year run on Channel Seven, 16 of which was as the resident landscaper on Better Homes & Gardens, Jason Hodges has been axed from the lifestyle television show.

‘‘To be honest, I am absolutely gutted,’’ Hodges told PS when asked about what had happened.

‘‘I think of myself as being the luckiest guy in the world, to have had the best job in the world and work with the best team there is … I’d be lying if I said I was not upset but as people in this business know, that’s how it goes.’’

PS understands Hodges, who also has a successful landscaping business and buxus balls empire, will make his final appearance at the end of the BH&G Christmas special which goes to air tonight, with his beloved dog Dannii by his side.

The news of Hodges’ departure has rattled the usually tight-knit crew working on the show, with host Joanna Griggs said to have been particularly upset by the change, which follows the recent arrival of new boss Andrew Backwell, a South African television executive who had previously worked on rival show The Block.

Let’s see how it goes down with the show’s loyal audience.

The great and good of the ABC gathered on the set of Q&A on Tuesday afternoon to bid farewell to the show’s pioneering executive producer, Peter McEvoy.

Noticeably absent was the outgoing host Tony Jones. PS initially thought he may be standing in line for a Chinese visa given he is soon to relocate to China where his wife, former 4 Corners stalwart Sarah Ferguson will become the network’s new correspondent. But this column later heard he was busy on his South Coast farm. He did record a brief video message.