You might know Padma Lakshmi from her role as the host of Top Chef. Or maybe you recognize her from her modeling days, or her three cookbooks, or as the founder of the Endometriosis Foundation of America, or that viral video of her eating pomegranate toast.

No matter how you’ve encountered Lakshmi, we’ll bet you’ve never really thought about how she got there.

We make that assumption because, honestly, we didn’t either until attending an intimate luncheon with her in honor of the Stacy’s Rise Project. Convened in a New York City loft, SheKnows and about 20 other guests gathered to celebrate the winner of the project, a funding and mentorship program for female entrepreneurs in the food and beverage industry. Lakshmi announced the winner, a plant-based frozen dessert company called Hakuna Brands (congrats, again!) and shared her best career advice with the group.

I felt a little awkward doing this, but you guys asked for it! ? (apologies to my followers with misophonia) #asmr #crunchy #mukbang #pomtoast

While sitting with such a successful (and well-spoken, if we may add) business woman, it initially took us by surprise when she recalled the early days of her career.

“I can’t tell you how many letters I wrote, where I included my cookbook, sent it to CEOs, McCormick Chili, all these people,” says Lakshmi. “I laugh now, but you just have to find somebody who can help you.”

She also praised her 20-year-old stamina, saying, “I thank that young girl because she had to do a lot of shit that I would never have the patience to do now.”

Joking aside, Lakshmi has built herself up as a food expert and activist, and we admire the work that she continues to accomplish. So, when she offered up free business advice at the luncheon, we of course took notes, and are now happy to share them with you. Here are Padma Lakshmi’s advice on being a business woman in today’s society:

We are in a new age of female empowerment, and we hope that any business woman out there is doing her part to lift others up with her. BUT, when you’re just starting off, Lakshmi recommends, “[saying] in the room what will get you the dough.”

2. “Be a little more pushy than you think is gracious”

As women, we are often taught to be polite, accommodating, and nurturing. And while those things are valuable, in the business world, Lakshmi says, “You have to be a little more pushy than you think is gracious.”

She even admits that at times she’s felt “like a pushy asshole,” but hey, look how that worked out for her.

Nobody gets anywhere completely alone. If you’re starting a business, there’s no way that you will know how to do all the things, so Lakshmi recommends asking for help.

In her case, she found that an investment in a business manager would be most valuable to her: “Because I didn’t have a business background, I hired a woman who had been a CEO at a major jewelry brand. I hired her as a consultant. She was basically our de facto CEO, and I prioritized that. I just felt that it was more important because I didn’t come to the table with that kind of nuts and bolts, back-of-the-house, management experience.”

“Know what you’re good at,” she continued. “If you’re really good in the kitchen because you know how to make amazing granola or dips or ice cream…find someone who compliments you.” 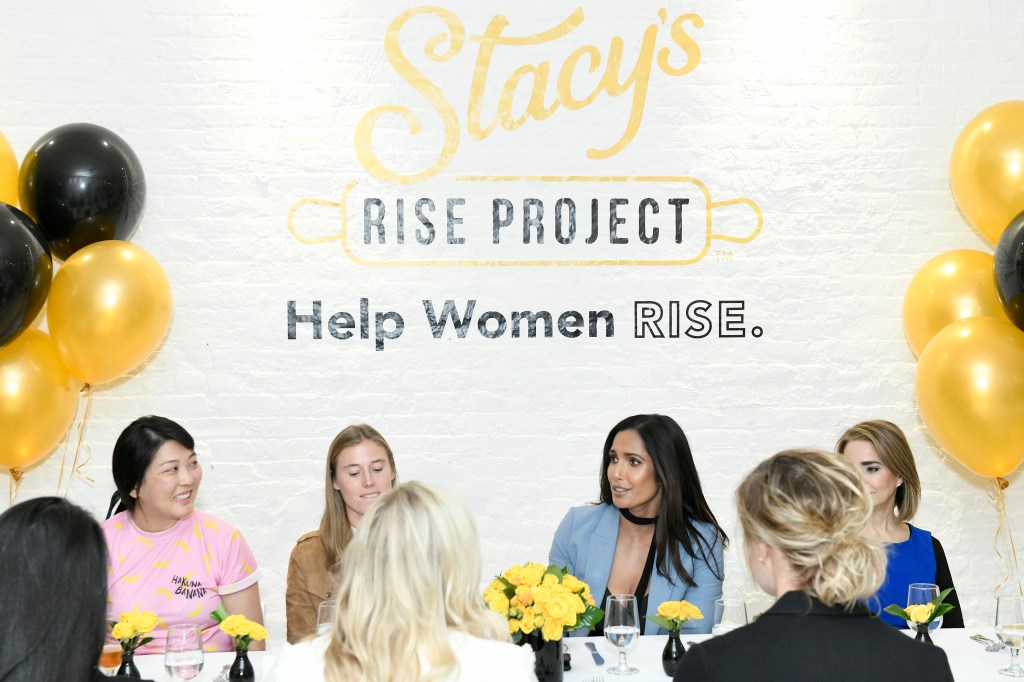 “I have been on the road literally since May, and I won’t stop being on the road until December,” relayed Lakshmi. “This is a really hard year for me and my family, but it’s a really great, successful year for my career. There’s always a payoff, and anyone who tells you that you can have it all and do it all hasn’t done enough. You just can’t.”

In her busy schedule, Lakshmi admits that she hasn’t been able to find the time to exercise as much as she’d like, and instead has been forced to choose career pursuits and family time instead. And if you need help prioritizing, Lakshmi offered this tidbit: “If you have to choose between your ass and your intellect, pick your intellect.“

5. “You have to know what your priorities are.”

And speaking of priorities, Lakshmi recommends making a list, and “know that it’s more important to do the things at the top of that list. All of those things are important, but give yourself a break.”

6. “Surround yourself with people who’s goals align with yours.”

While Lakshmi expressed that she doesn’t have much of a social life these days, she has fostered deep friendships with like-minded people. “I have three, four, or five really good, close friends that I’ve had for almost 20 years. They’re just as successful in their own field as I am. They’re business owners, they’re editor in chiefs…They don’t have a social life, either. So, you know, I’m not alone in this.”

Similarly, she recommends that you, too, “surround yourself with people whose goals align with yours.”

“We won’t really ever have equality if we don’t ask and fight for it ourselves,” says Lakshmi. “And anything that has been won or gained as far as equality is concerned in our society has been done strictly by taking it, not by asking.”

When you’re in a position of power, demand equality and make the workforce a better place…for everyone.

So, anyone else feeling empowered to start their own business and change the world? Yeah, us, too.