Overlooked is a series of obituaries about remarkable people whose deaths, beginning in 1851, went unreported in The Times. This month we’re adding the stories of important L.G.B.T.Q. figures.

Ma Rainey did not make the first blues recording; that distinction belongs to Mamie Smith, the vaudevillian who recorded “Crazy Blues” in 1920. And Rainey did not achieve the monumental acclaim of Bessie Smith, her mentee and, later, friendly rival.

But it’s possible that neither of these figures would have sung the way they did without the influence of Rainey.

Often called the “Mother of the Blues,” she was the first entertainer to successfully bridge the divide between vaudeville — the cabaret-style shows that developed out of minstrelsy in the mid-1800s, and catered largely to white audiences — and authentic black Southern folk expression.

Even before the recording industry took off in the 1920s and the blues became a nationwide craze, she had developed a national reputation for her energizing, straight-talking performances and full-throated vocals. As the biographer Sandra Lieb observed in “Mother of the Blues: A Study of Ma Rainey” (1983), by combining a black folk style with techniques learned on the vaudeville stage, Rainey “offered to whites a glimpse into black culture far less obscured by white expectations, and offered to blacks a more direct affirmation” of their cultural power.

In the process, Rainey helped to mainstream narratives of black female autonomy that had little to do with the Victorian norms of white society. Partly that meant speaking candidly about her attraction to women as well as men. In “Prove It on Me Blues,” accompanied by a jug band, she sings defiantly:

Went out last night with a crowd of my friends.

They must’ve been women, ‘cause I don’t like no men.

It’s true I wear a collar and a tie,

Makes the wind blow all the while.

Don’t you say I do it, ain’t nobody caught me.

You sure got to prove it on me.

A Georgia native, Rainey began her career on the tent-show circuit, traveling with performance troupes that set up their own stages in towns across the South and Midwest, honing her own gregarious brew of music, comedy and social commentary.

The characters in Rainey’s songs rarely allowed themselves to become dependent on a male partner, or any agent of the law. “Far more typical,” the scholar and activist Angela Davis wrote in the book “Blues Legacies and Black Feminism” (1998), “are songs in which women explicitly celebrate their right to conduct themselves as expansively and even as undesirably as men.”

In Rainey’s blues — many of which she wrote herself — even the most jilted narrator was unlikely to fall into despair. In “Oh Papa Blues,” after detailing her grievances against a neglectful lover, Rainey turns on a dime, steeling herself to exact revenge.

Oh, papa, think when you away from home

You just don’t want me now, wait and see

You’ll find some other man makin’ love to me, now

Papa, papa, you ain’t got no mama now.

With a mouthful of gold teeth, richly dark skin and flashy jewelry dangling about her, Rainey cast a striking figure, with a ruggedly powerful voice and lavish stage presence to match.

“When she started singing, the gold in her teeth would sparkle,” the pianist and composer Thomas A. Dorsey, who was the musical director on some of her best-known recordings, wrote in his unpublished memoirs.

“She was in the spotlight,” he added. “She possessed listeners; they swayed, they rocked, they moaned and groaned, as they felt the blues with her.”

Sterling Brown, the poet and pioneering black literary critic, put it even more directly: “Ma really knew these people; she was a person of the folk.”

She was also a celebrity. Of the nearly 100 songs she recorded in the 1920s, many were national hits, and some have become part of the American musical canon. Her 1924 recording of “See See Rider,” on which she is accompanied by a young Louis Armstrong, was added to the Library of Congress’s National Recording Registry in 2004.

We know that Ma Rainey was born Gertrude Pridgett, the second of five children to Ella (Allen) and Thomas Pridgett. But beyond that, details are sketchy. Rainey often said she was born on April 26, 1886, in Columbus, Ga., but a 1900 census entry lists her birthplace as Alabama and her birth date as September 1882.

When her father died in 1896, her mother went to work for the Central Railway of Georgia. Gertrude began singing professionally as a teenager, making her first public performance in 1900 at the Springer Opera House in Columbus, where she joined a stage show called “The Bunch of Blackberries.” She was soon traveling with vaudeville acts.

It was while on the road, in Missouri in 1902, that she first heard a country blues singer. A young woman came up to the troupe’s tent with a guitar, singing a song of heartbreak with a twisting, ghostly melody. Rainey found herself so struck by the tune’s mysterious pathos that she began singing the song as an encore at her own shows.

Traveling throughout the rural South, Rainey began to hear similar songs, and she worked more country blues into her repertoire. The blues style — based on a pentatonic scale with an African-derived blue note, and generally following a loose, repetitious form — was such a natural fit for her that at one point she said she had invented the term “blues,” although most historians consider that claim to be an exaggeration.

In 1904, Rainey married the comedian, dancer and vocalist Will Rainey, and they toured as a duo with a variety of minstrel troupes, billing themselves as Ma and Pa Rainey. In the mid-1910s, the couple joined Moses Stokes’s tent show, then hit the road for a few years with Tolliver’s Circus and Musical Extravaganza, which touted the couple as “Rainey and Rainey, Assassinators of the Blues.” For a time they performed with the Rabbit Foot Minstrels, perhaps the most esteemed troupe of the day.

At some point during her travels, Rainey became acquainted with a young Bessie Smith, who was then performing as a chorus girl, and became Smith’s mentor. Not only were they both virtuoso singers; they shared a love of bold, risqué lyrics, and each proudly proclaimed her bisexuality. During one tour, after Rainey was caught by the Chicago police in the midst of a sexual dalliance with some of her female dancers, it was Smith who came to bail her out of jail.

Rainey separated from her husband in 1916 and began touring with her own show, Madam Gertrude Ma Rainey and Her Georgia Smart Set, which included a chorus line of male and female dancers. (She later married a younger man, though details of that relationship are scarce.) Rainey often closed her set with “See See Rider,” a lament for a lover whose primary romantic partner comes back into the picture. “I’m goin’ away, baby, won’t be back till fall/Lawd, lawd, lawd,” she sings on the recorded version. “Goin’ away, baby, won’t be back till fall./If I find me a good man, I won’t be back at all.”

Like many tent shows, Rainey’s often holed up for the winter in New Orleans. In the off-season she became friends with a number of the city’s leading jazz musicians, including Armstrong, Kid Ory and King Oliver. 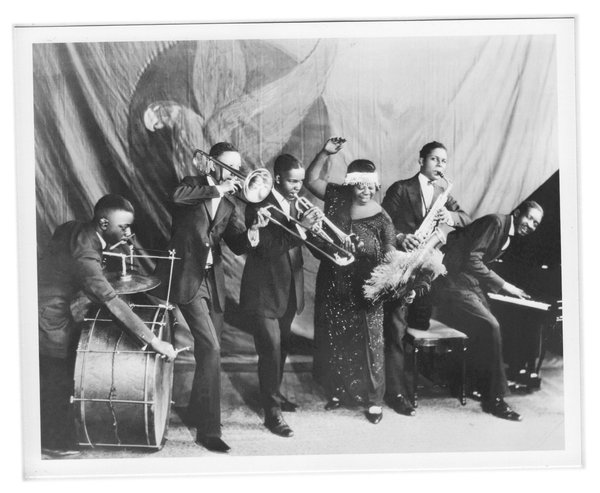 In 1923, Rainey traveled to Chicago to record for the first time for the Paramount Record Company. Riding the breakout success of these recordings, she and Dorsey assembled a touring band that could play both homespun blues and written sheet music — an early example of the archetypal jazz musician’s skill set.

Between 1923 and 1928, “race records” by and for the black community becoming a thriving industry, Rainey went on to record no fewer than 92 songs for the small Wisconsin-based Paramount label. Paramount had a low budget compared with major outfits like Okeh and Columbia (for which Bessie Smith cut her most famous sides), and Rainey’s recordings were of mediocre sound quality.

When Paramount went bankrupt in the 1930s, they fell out of print. Other labels recirculated parts of her catalog, but it wasn’t until the late 1960s that most of her recordings received a proper reissue, on the Milestone and Biograph labels.

She lived for much of the 1920s and ’30s in Chicago, performing in concert and at house parties with jazz musicians like Armstrong and Jelly Roll Morton, and touring the country often. In 1935, Rainey returned to Georgia and effectively retired, though she worked for a few years as a theater proprietor.

Ma Rainey died of a heart attack on Dec. 22, 1939. Ever since, paeans to her have been a motif of black music and letters. The blues guitarist and vocalist Memphis Minnie recorded a tribute to her in 1940, telling the story of her life and cataloging the names of her famous songs. Sterling Brown’s poem “Ma Rainey” evoked the thrill of her performances, and the validation that she offered to black listeners of the era.

Git way inside us,

Even in the late 1960s, at the height of the Black Arts Movement and long after her death, Rainey continued to hold a special significance in the heart of black America as an early ambassador of empowered sexuality and personal liberation. The poet Al Young wrote “A Dance for Ma Rainey” in 1969, proclaiming: “I’m going to be just like you, Ma/Rainey this monday morning.”

Later in the poem, he pledged:

I’m going to hover in the corners

of the world, Ma

& sing from the bottom of hell

up to the tops of high heaven