Individuals will face fines of up to $111,000 and companies up to $550,0000 if they fail to take down abusive content from the internet within 24 hours, under draft legislation that will hand Ms Inman Grant new powers to track down online abusers. 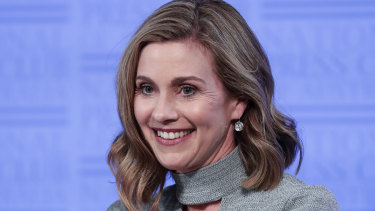 The measures are the linchpin of a proposed new adult cyber abuse scheme, announced by Communications Minister Paul Fletcher as a "world first" on Wednesday.

Ms Inman Grant said the scheme, which the government hopes to legislate next year, would give her a range of enforcement powers from formal warnings to fines, adding that perpetual abusers were now on notice.

"Those are the types of people that we would likely target with these harsher penalties," Ms Inman Grant said.

"We will be given new powers to be able to compel the platforms to provide us with more account information, so that we can at least service notices or try to establish identities in a much more better fashion than we can today."

The Office of the e-safety Commissioner was established in 2015 as a world-first government agency dedicated to regulating online safety. Ms Inman Grant was appointed as the inaugural commissioner in 2017.

Ms Inman Grant said anonymous online attackers were able to operate with relative impunity under current laws and the lax enforcement by social media platforms of their own policies.

"If the worst thing that happens is they have their account on Twitter taken down for three days when they can just create a new one, that's not much of a deterrent," she said.

"We have to hold those people to account, but we also need to hold the platforms to account for not enforcing their own policies or using more proactive measures to detect and prevent this harmful content surfacing in the first place."