Hundreds gathered in New York City’s Far Rockaway on Saturday to paddle 13 blocks — to honor March 13, the day Breonna Taylor was killed — and host a traditional surfer tribute to her life.

During paddle-outs, participants usually carry leis, flowers or sometimes even their loved one’s ashes out to the sea. In the Rockaways, only a few carried flowers while others held signs that speak out against racial injustice.

Once the surfers reached their destination at 86th Street, they gathered in a circle, raised their fists, held hands and chanted. Through the crashes of the waves, they could be heard saying “No justice, no peace,” “Say her name,” and “Black lives matter.” 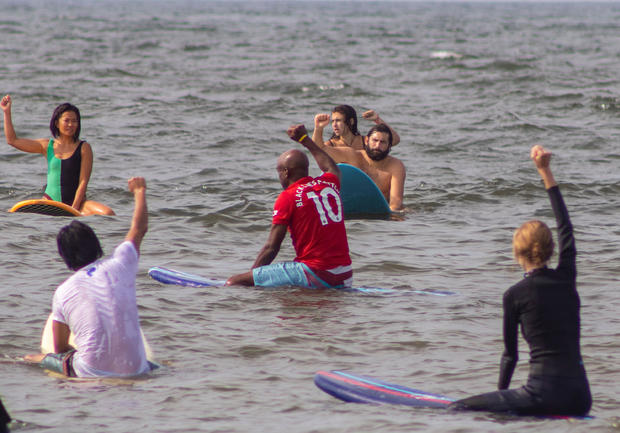 “And then we were just talking about how we’re all a family, just a big surfing family,” said Louis Harris, founder of the East Coast chapter of the Black Surfing Association. “There’s no racism out there. There’s no judging out there. I was telling everybody out there, ‘I don’t know your name but I know your face and I’ll always have your back.'”

“It looked amazing,” he said. “It was a beautiful, beautiful thing to see.”

This is the fourth paddle-out for racial justice the Black Surfing Association has held this summer. During the last one, held on July 25, hundreds gathered to paddle for eight blocks in honor of George Floyd, who died after a Minneapolis officer kneeled on his neck for nearly 8 minutes. 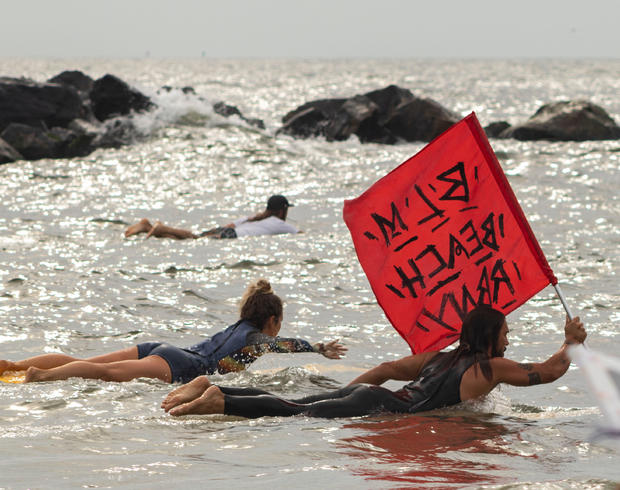 Harris said the organization, which provides free surf lessons to children and aims to make surfing more inclusive, is focused on keeping the message of racial injustice alive. The sport has a long well-known history of racism and a lack of diverse representation, according to numerous experts, including University of Southern California professor Peter Westwick.

In the Rockaways, a coastal area in Queens where surfing is considered a way of life for residents, Black people make up around 35% of the population, according to the latest published city data from New York City in 2018. But a look at a group of surfers reveals a much smaller representation.

Harris said that having a paddle-out is a way to peacefully show that racial injustice and racism must end.

“Yeah, all lives matter…but right now it’s Black lives matter. Breonna Taylor was in her house sleeping. They broke into her house…and nobody is arrested yet. This was a young woman sleeping in bed,” Harris told CBS News. “Things don’t have to get burned down. Restaurants and businesses don’t have to get looted. You can do it in a nice and peaceful way and get your point across.”

Those who couldn’t participate in the paddle-out walked the distance on the shore.

Taylor was killed on March 13 when police entered her home with a no-knock warrant. Officials claim they shot at her because her boyfriend, Kenneth Walker, shot at them first. Taylor’s family, however, said in a lawsuit that Walker shot at the officers because they didn’t announce themselves when they entered the home, and he thought they were trying to break in.

Only one of the three officers involved in Taylor’s death has been fired. None of the officers have been charged.

Maura Corrigan attended the last two paddle-outs Harris hosted. She had to sit this one out because of an injured knee but said coming out to the event is an important way to make sure Taylor’s name, and racial injustice issues as a whole, are not forgotten.

“The more people fight for justice, hopefully will enact some change, she said. “I just think we can’t stop until there is change. Breonna Taylor should not be dead…When there was all the Black lives matter stuff in 2014, it was happening for a while and then it died down. It can’t die down this time.” 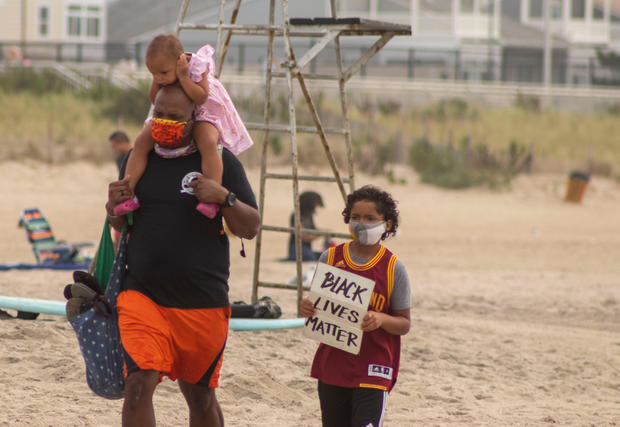 Meaghan McKinley walked the distance with her husband and two children. For her, taking part in the event was an “emotional” and “inspiring” experience. McKinley, who is White, said that they live in a community where her husband and children are a minority, and “blue lives matter” is the norm.

“My husband is Black, my children are Black, and their lives matter. Where we live it’s a very white community and there’s not a lot of people that support the Black lives matter movement, so I wanted them to see that there are people standing up for them,” she said. “It’s very confusing, especially because of where we live. My son, when we’ll drive through Rockaway, he’ll be like ‘why are the Brown people on one side?'”

She did not want to disclose the area where they live for safety reasons, but said that even though their neighborhood is safe, her family has to live with different concerns.

“Kids run around and do what they want and [my son] can’t do that because people might think he doesn’t belong there,” she said. “My husband’s been asked if he belongs there a lot.”

Just a few days prior to the paddle-out, McKinley said her 9-year-old son was “heckled” by other children while he was riding his bike through the neighborhood, an experience she never had when she grew up in the town. But as her husband explained, she “wasn’t a young Black boy.”

She said it’s important for her son and 3-year-old daughter to see that not all communities treat people badly because of the color of their skin, and that she wants them to be proud of who they are. 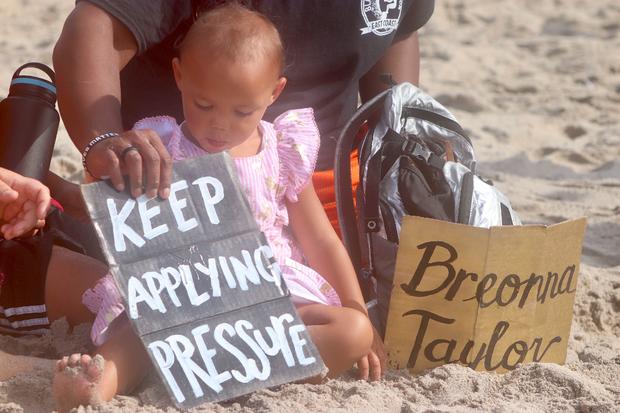 “[My son] used to say ‘I’m not black I’m tan’ and I told him no, you are Black and that’s something to be proud of…This is a human life that we’re doing this for,” McKinley said as she watched her daughter play in the sand with a sign that reads “keep applying pressure.” “She could be Breonna Taylor. [My son] could be Breonna Taylor.”

“To me, they’re my world, just like Breonna Taylor’s mom, she was her world. But just in our society, they are not seen as equal; they’re seen as dispensable,” McKinley said. “It’s very hard explain tot a child that we think you’re everything but the world doesn’t and you have to show them you are.”