NSW Premier Gladys Berejiklian says her state will not adopt a proposal under consideration by the Victorian government for thousands of international students to be chartered into Australia and quarantined in student accommodation from January.

Speaking after national cabinet met on Friday, Prime Minister Scott Morrison also indicated he was in no rush to pressure states into expediting the return of international students – a $40 billion sector nationwide. 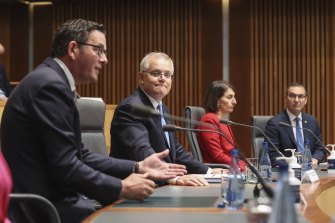 The Age revealed on Friday that the education sector had proposed to every state and territory a bespoke quarantine model that would allow 23,000 students to enter Victoria between January and April 30, partially clawing back the exodus of at least 80,000 students from the state this year.

While Victoria is considering the plan, which would mean quarantine spots are not taken from stranded Australians, Ms Berejiklian ruled out the arrangement for NSW.

"I'm not happy to see the quarantine system move outside of the hotels at this stage. I think that would be too high risk," she said.

"That's just NSW, I know other states do have other arrangements. And so for that reason, the cap of 3000 [arrivals per week] is not going to change in NSW."

The Northern Territory and South Australia have arranged for hundreds of international students to arrive under specially designed quarantine arrangements. Ms Berejiklian said she still wanted 1000 students and skilled migrants to enter NSW from January, comprising one-third of all international arrivals.

"It's a question about when Victoria comes online [with hotel quarantine] and other states come online, how far can we eat into the 39,000 Aussies that are still waiting to come home," she said.

"And once that's dealt with, I'm sure there'll be opportunities for us to consider all those other categories which will boost our economy and prospects for jobs in the future."

Victoria began receiving international arrivals at a cap of 160 per day for the first time since July this week. Premier Daniel Andrews indicated the cap would be increased early next year. 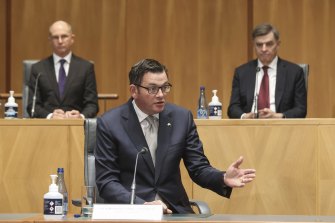 He did not comment on the proposal for students to quarantine in student accommodation but said hotel quarantine remained the "safest and most effective way for people to come home and quarantine".

"The health standard on quarantine is the most important issue. Where we can create capacity for people to return who are non-residents, such as seasonal workers, then we can develop bespoke arrangements," he said, pointing out Victoria had a shortage of between 15,000 and 20,000 agricultural workers for this harvest season.

Mr Morrison said international students and skilled migrants would be a priority topic when national cabinet returns next year before emphasising that every Australian who wanted to return from overseas must be prioritised first.

"On international students, where net additional capacity can be safely established, then that is something we've always been open to … it can't take away from an Australians' ability to come home," the Prime Minister said.

"That is our requirement … I know states are very keen to see that international services opportunity return, but I know they also are very committed to seeing Australians come home."

"I think we have to be creative and think a little bit more broadly to do this," she said on Friday.

"If we could use facilities – mining facilities, or Howard Springs [in the Northern Territory], or facilities in other states perhaps to help facilitate that. We should be working with other states to see how we can make that happen."

A Melbourne University spokeswoman said the university was looking forward to welcoming back some international students onto campus in 2021.

"The university continues to have ongoing talks with the federal and state governments about the mechanics to facilitate the return of overseas students to Australia," she said.