NSW Treasurer Dominic Perrottet has a penchant for one-liners. Eighteen months after NSW’s first case of COVID, his comment du jour – “We cannot let our success be our failure in the future” –sums up the direction the state should be heading.

Next Tuesday, Perrottet will deliver his fifth budget, his penultimate before the next state election. If he is to make good on his one-liner, this budget — as the Treasurer acknowledges — needs to look forward, not back. 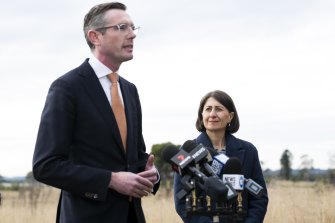 NSW has moved from being in a state of intensive care to a state in recovery and reset. Its economy has rebounded, with the exception of the still-struggling Sydney CBD. Most of NSW’s lost jobs have been recovered. Predictions that unemployment would hit 7.5 per cent by last Christmas did not eventuate. The regions are in a purple patch thanks to domestic tourism.

On Wednesday the state experienced its first case of community transmission of COVID-19 since the beginning of May, and the number of vaccines administered in NSW is now well over 1.7 million. The pandemic is far from over, but NSW’s emergency response must move to the next phase.

This budget will be different from the crisis budget Perrottet delivered late last year, which was focused on splashing cash to desperate businesses and industries amid a pandemic-induced recession. Stimulus funding will remain vital for struggling sectors, such as hospitality and those hit by an absence of international tourists and students, but the government also needs to make clear its plan for living life alongside the virus.

Despite recording a historic deficit of $16 billion (later revised to $13 billion), Perrottet tried in the last budget to kick-start significant reform by announcing his push to rid the state of the widely unpopular stamp duty in favour of a land-based tax. His big vision has hit a speed bump. A progress paper, released last week, revealed 84 per cent of submissions to his reform white paper agreed that the tax needed to be overhauled, and two-thirds of people said stamp duty was a significant burden to property ownership. Far less apparent was what should replace stamp duty. Perrottet’s plan for a two-tiered tax system, under which buyers could choose to pay stamp duty or land tax, is not winning people over.

And there has been little appetite from the other states to join Perrottet in his stamp duty crusade, and conspicuous silence from federal Treasurer Josh Frydenberg. Perrottet will push on, but it should not be a deterrent to embrace other reforms and make the most of NSW’s quicker-than-expected recovery.

New Labor leader Chris Minns’s stance since taking the reins is that he will not be a negative voice against the government’s pandemic response. It was his first message to Premier Gladys Berejiklian and to his voting base. Minns, however, will not shy away from prosecuting government shortcomings that have been overshadowed, forgotten or ignored while the state has battled the pandemic. He has his sights on cost-of-living pressures and Sydney’s growing pains, the sleeper issues that have bubbled away during COVID-19.

Berejiklian’s steadfast commitment to steering the state through the pandemic has left NSW in an enviable position. But the state cannot tread water. Perrottet warned this week that it risked falling behind if it could not “rejoin the world soon”.

NSW is leading the country in getting international students back into Australian campuses, having taken a detailed plan to the federal government. It cannot control the federal government’s decision about when to reopen international borders, but Canberra will have fewer excuses to delay if NSW can continue to get vaccinations into its citizens’ arms as soon as they become available.

The pandemic is far from over, but Tuesday’s budget must clearly lay out for voters the government’s agenda for a post-pandemic world. If it doesn’t, Perrottet’s fear could become reality.

The Opinion newsletter is a weekly wrap of views that will challenge, champion and inform. Sign up here.