"Lots of sex" may be a blunt description of what happens in the edgy new Starz series Now Apocalypse, but it’s in no way an inaccurate one. Set in Los Angeles on the brink of a potential alien invasion or some other kind of imminent and trippy end-of-the-world scenario, Now Apocalypse is a collaboration between indie director Gregg Araki and Slutever writer-star Karley Sciortino that breaks sexual taboos with a smile. And though the show is the brainchild of two creators with very specific tastes, its fearlessness in depicting sexuality surprised even the show’s two stars, Avan Jogia and Kelli Berglund.

"There was more sex than even I thought, and I read the scripts," Berglund jokes to Bustle. But the show’s take on sexuality makes sense to her co-star Jogia. "It’s about joy," he says. "So although it is a lot more sex than a lot of people are used to [seeing], not much is made of it. It just sort of happens. It’s like brushing your teeth or putting on your socks."

The show follows Jogia’s character Ulysses, who declares himself a Kinsey 4 bisexual in the first episode, and Berglund’s Carly, whose side hustle is being a webcam model, as they navigate life and love in LA at the potential end of the world. By matter-of-factly centering its story on two best friends whose respective relationships to sex and sexuality is never dwelled upon or treated as a "dark secret," Now Apocalypse is able to deliver a fresh take on what it’s like to be a millennial in love — or lust.

That means that the show doesn’t shy away from including things like condoms and vibrators in scenes — something that’s still oddly rare. And Jogia is totally on board with Now Apocalypse‘s frank depiction of sex and sexuality. On other films and TV shows, sex is "never filmed correctly," he laughs. It’s too clean. There’s no aftermath. "That’s why everyone’s having such bad sex," he declares.

"It’s supposed to be very dramatic and romantic," Berglund says of most sex scenes on television, whereas Carly’s sex scenes on Now Apocalypse are "realistic and funny." "Things go wrong, and it’s not perfect," she says. "That’s what it is in real life." 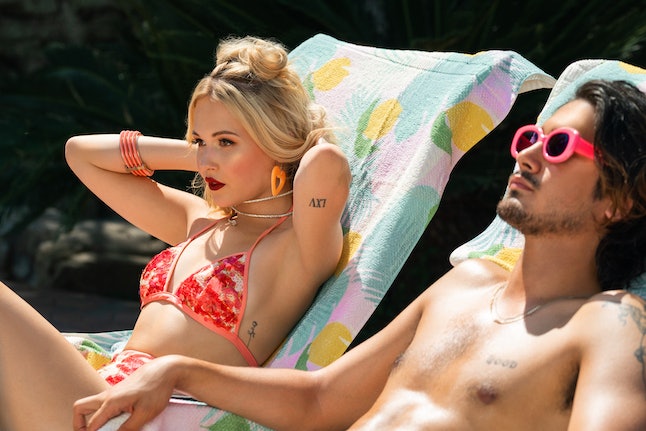 Both Ulysses and Carly are game for whatever comes their way. "Uly’s a wanderer," Jogia says. Given that his character’s name "Ulysses" is the Roman form of "Odysseus," a legendary wanderer, there’s no surprise there. "He’s a new sexual explorer. He’s pursuing love as much as you can in a world that is seemingly not prioritizing love… and he believes in fate."

Carly, meanwhile, is at first "a lot to handle," according to Berglund. Viewers might not be expecting a character who moonlights as a cam girl to have heart and depth, and that’s perhaps exactly why Carly has both those things, too. "Girls that are categorized as sluts in TV and film, they’re supposed to feel tortured, and like they can’t express themselves. They’re supposed to feel bad for it," Berglund says. "No one should feel bad for Carly. Her sexual identity is sort of where she’s liberated. She applies this confidence to the rest of her life and she loves it."

Don’t feel bad for the actors either, they assure me. "I’m very happy with what Carly represents," Berglund says. "I hope it inspires people to not be afraid." She adds that Now Apocalypse destigmatizes all kinds of sex — be it sex work or a casual hookup. "It doesn’t have to go perfectly," she says. "That’s part of the growing and becoming an adult."

It’s refreshing to see a show about millennials that is casual and joyous in its treatment of sex, considering that one of the many things we’ve allegedly killed is sex and romance. (We’re in a "Sex Recession," according to The Atlantic.)

"I would like to know the metric," Jogia says. Does that recession mean less sex, or fewer partners? "I think people are having just as much sex, they’re just being selective with their partners and having sex less frivolously." 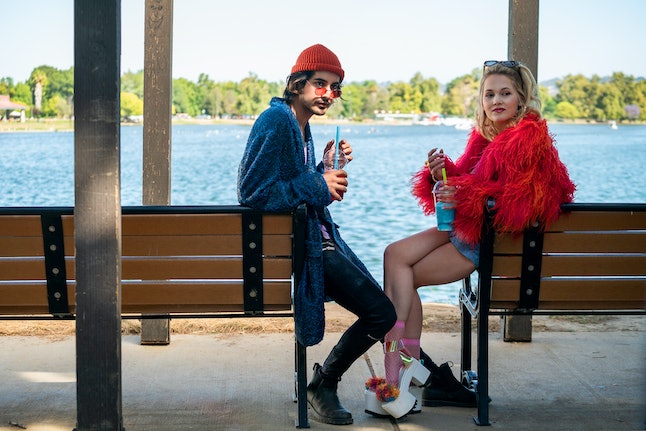 As you may have noticed from the psychedelic advertising, Now Apocalypse also takes a casual and non-patronizing approach to marijuana. But Uly is a high-functioning stoner, not a party stereotype.

"It’s not a soapbox show," says Jogia." We’re not spiking the camera being like, ‘Here are our values,’ you know? I just think that kind of art… it’s not subtle and it’s just not my favorite kind of art."

Sure, Now Apocalypse definitely has a point of view, but its frank approach to taboo topics is either for you, or it isn’t. The show will do just about anything, including introducing lizard aliens (!), but the one thing it won’t do is try to convince you to like it. At the end of the world, Now Apocalypse feels totally fine just being itself.