The nephew of a woman who was last seen almost 30 years ago has launched a fresh appeal for information, and says he believes his aunt’s disappearance might be connected to organised crime.

Bernadette Cooper, originally from Co. Monaghan, Ireland, was last heard from on 10 January 1993 when she phoned a friend from a pub in Tooting, south London.

At the time Bernadette was living in the town of Benalmadena on Spain’s Costa del Sol, where she ran a struggling Irish bar called Molly Malone’s.

She had returned to the UK in the hope of finding the funds she needed to keep her Spanish dreams afloat, but mysteriously disappeared without a trace.

Now, almost three decades later, her nephew Leon Moore is doubling down on his search for his missing aunt after making a deathbed promise to his dying father that he would find out what happened to his sister. 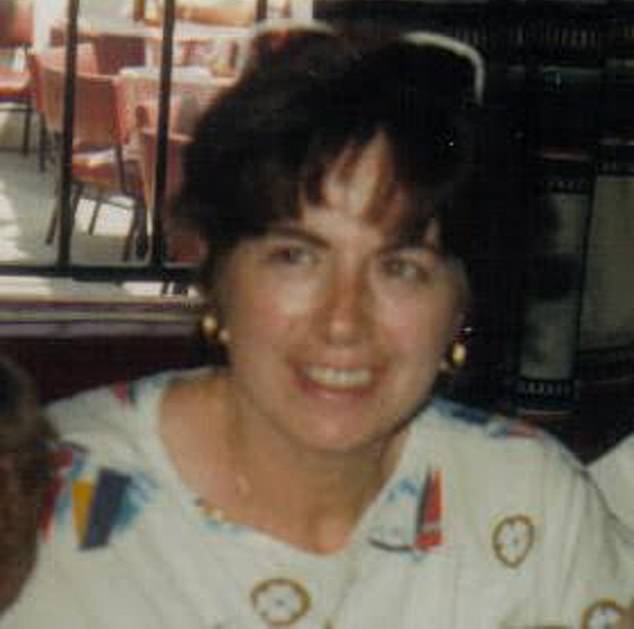 Missing: Bernadette Cooper, pictured, originally from Co. Monaghan, was last heard from on 10 January 1993 when she phoned a friend from a pub in Tooting, south London

Surrey Police has also launched an investigation into Bernadette’s disappearance, after she was finally officially reported missing last year.

Speaking on the Missing Podcast, Mr Moore said: ‘There is a human life here. There is a woman’s life at stake. The truth is out there.’

Born in a small town in Ireland, Bernadette, who would now be 77 years old, moved to London in the 1960s. She met her second husband, Brian, and had two children.

‘She was in a bigger city and was thriving,’ Mr Moore said. ‘She loved her new life and the opportunities it gave her.’

In 1987 the couple moved to Spain where they opened Molly Malone’s, an Irish pub that quickly became popular with tourists. There is still a pub by that name operating in Benalmadena, but it has no connection to the one run by the Coopers.

While the pub enjoyed success in its first couple of years, it was soon hit by the recession that gripped Europe in the late 1980s and early 1990s. ‘It became a very, very difficult place to be,’ Mr Moore said. 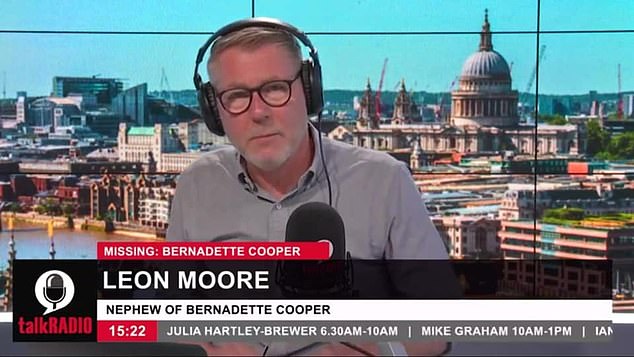 Searching for answers: Now, almost 30 years later, her nephew Leon Moore is appealing for fresh information about his missing aunt. Pictured, on a radio show about the case

By the summer of 1991, the Coopers’ marriage had crumbled and Brian returned to the family home in England to prepare for a divorce.

‘Bernadette soldiered on,’ Mr Moore continued. ‘But things were still extremely difficult. Many of her friends decided to pack it in. Others urged her to do the same but she was very, very, very determined to carry on… She saw it as a setback for sure… but she wanted to have it. I knew her as a very determined woman. ‘

Towards the end of 1992, Bernadette could no longer afford to keep the bar running. She returned to the UK, telling her friends in Spain that she was only shuttering Molly Malone’s temporarily while she went to finalise the divorce and find the funds she needed to continue with her Spanish dream.

‘This is the point where things become very obscure and it is hard to ascertain exactly what happened with Bernadette,’ Mr Moore said.

It is thought the first thing Bernadette did was ask her siblings, including Mr Moore’s father, for the money she needed: £10,000, equivalent to £20,000 today. It was more than anyone could afford.

‘Nobody was in a position to help her,’ Mr Moore said. ‘But she took it badly. There were some arguments. So when the family assumed she had gone back to Spain they decided to give her a wide berth. A cooling off period. And let the dust settle.’

No one from the family contacted Bernadette for a few weeks, assuming she was back in Spain. It was only later, after not hearing from Bernadette on birthdays and at Christmas, and after being unable to reach her on the phone, that ‘red flags went up’.

Bernadette’s sister flew out to Spain to find out what was happening. She was shocked when she turned up at the door of Molly Malone’s to discover it was under new ownership, with a Scottish woman behind the bar. Her sister’s belongings were packed up in the loft, gathering dust, and no one had heard from her for 12 months.

The family leapt into action, contacting all of Bernadette’s friends in Spain, but to no avail. Her ex-husband Brian also hadn’t heard from her. 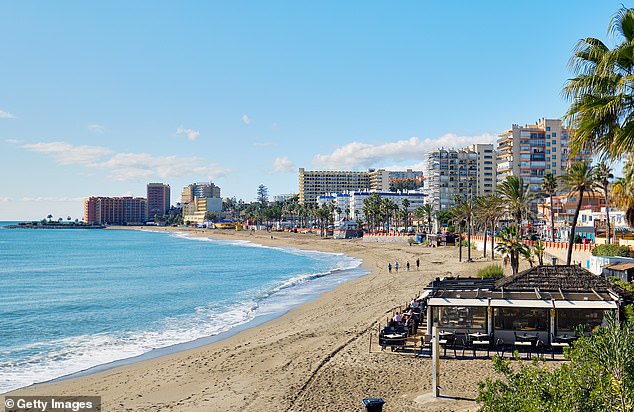 Struggling business: Bernadette ran an Irish pub in Benalmadena, on Spain’s Costa del Sol. At the time of her disappearance it was a crime hotspot and Mr Moore believes this could be a significant factor in what happened to his aunt. Pictured, the beach at Benalmadena in 2019

‘It was a mystery,’ Mr Moore said. ‘They always tell you how vital it is in the first 24, 48 hours to ascertain what happened. Of course, when 12 months goes by, you’re starting on the back foot with a cold trail and that can be very, very difficult indeed.’

The last anyone heard of Bernadette was a phone call she made from the Horse and Groom pub in Tooting, south London. She spoke to a friend in Spain to say she had ‘got the money and was coming home’.

In the aftermath of the disappearance, the family enlisted the help of the Salvation Army, hired a private investigator, as well as putting in calls to hospitals and morgues. However they didn’t turn to the police.

‘It’s a question that’s been asked many times,’ Mr Moore said, when probed on why they didn’t file a missing persons report at the time. ‘I can only give you the answer that might not make sense to anyone outside the family. 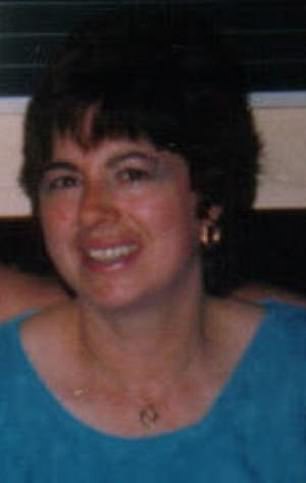 Still missing: Bernadette Cooper before her disappearance. She would be 77 today

One ‘romantic’ theory was that Berndatte was ‘just being Bernadette’ and had taken the money to start a new life somewhere, maybe because she met someone new.

‘Certainly it would never have entered their [the family’s] minds that it could be as macabre as foul play, or more than that,’ Mr Moore said.

There is also the possibility that Bernadette, who Mr Moore described as ‘loud’, might have been overheard in the pub talking about the £10,000 she had recently acquired.

‘It was not the Ritz, that bar, let’s put it that way,’ Mr Moore said. ‘It was a bar of some repute. I don’t think all the individuals in there went to Mass on a Sunday.’

He continued: ‘She was catnip to men and she enjoyed their company. She could well have fallen in with someone, she could have gone onto another bar, she could have met someone when she was travelling.

Another, darker theory, and the one that Mr Moore believes is most likely, is that Bernadette somehow fell foul of gangsters from one of the organised crime syndicates that operated in the Costa del Sol, then known as the crime capital of Europe.

Can YOU help find Bernadette Cooper?

‘Any number of high profile gangsters from the UK and Ireland, particularly, had set up shops, had opened bars and restaurants very close, if not beside, to where my aunt had set up her own bar,’ Mr Moore said. ‘And they decided to pray upon the expat community as their new source of income.

‘For example there were many, many, time share scams, there were extortion and protection rackets.’

There were reports of bar owners being threatened, either for money or as a warning to keep quiet about the drug dealing and other crimes taking place around them. They were also pressured into laundering money or storing stashes of party drugs like cocaine and ecstasy for dealers.

Mr Moore, who has spent years investigating his aunt’s investigation independently, believes his aunt’s disappearance could very well be linked to organised crime.

He told one story about how Bernadette and Brian were ‘gassed and robbed’ in their apartment in a ‘military-style’ operation.

‘When I found out that it was their takings that were robbed, I thought “well here’s a bar that at this stage is not doing very well at all. What exactly were they stealing?”‘

The report cannot be verified. However in 1996, two years after Bernadette’s disappearance, Brian was sentenced to five years in prison after being caught producing ecstasy for a criminal gang. There is no evidence that Bernadette or Brian were involved in organised crime before she disappeared.

Mr Moore recently published an article addressing the possibility that his aunt’s disappearance was linked to organised crime and said he had since received a ‘death threat’ and threats of violence.

‘In addition to that, there are some people who are too frightened to speak,’ he said. ‘There is something about this picture that is not right.’

After carrying out his own enquiries, Mr Moore decided he needed support from the police and filed a missing persons report last year. Surrey Police are now investigating.

‘That’s where we are today,’ Mr Moore said. ‘A police investigation and bits of information that are leading us to new areas of inquiry which I hope will bear fruit and give us the answers we’ve all been looking for for 28 years.’

Anyone with information is encouraged to visit the podcast website.