Follow along as “Sunday Morning” contributing videographer Judy Lehmberg reports on her two-month trip to Kruger National Park in South Africa and to Kenya’s Maasai Mara.

I’m done with lions. Well, that is a lie. Actually I am embarrassed at my lack of lion-sighting ability. Yesterday we stopped beside the road to change a camera battery and then looked up and realized a lioness had just crossed the road right in front of us. I looked up just in time to see her look back at us and then disappear into the bush. Rats!

After I blew the lion right in front of us, we found a couple of lions we could barely see behind the grass on a riverbank. We wanted to film them but the visibility was terrible, and we were on a bridge surrounded by other people wanting to do the same, so we couldn’t move to a better position. I was frustrated, but then I looked down at the river. There was the cutest malachite kingfisher perched on a reed fishing his little heart out. I think I heard it say, “Hey, you idiot, look at me! I’m much prettier than those lions and I am a damn good predator.” Which it quickly proved by swooping down, catching a small fish, and returning to its reed perch to quickly swallow. Poor fish. Lucky me.

Malachite kingfishers are beautiful, and extremely tiny (5.5 inches from the tip of their relatively long bill to the end of their short tail), so we must be fairly close to get a decent photo. We’ll take a close malachite over a lion behind grass anytime. 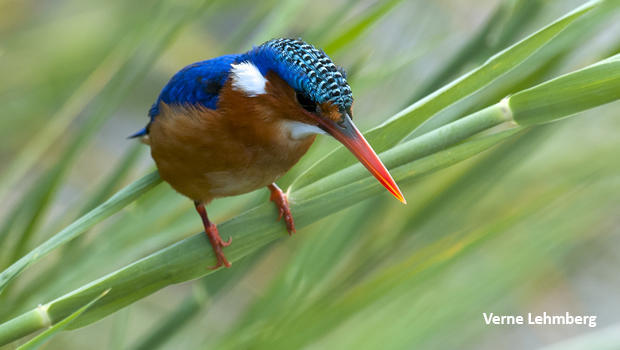 That thought reminded me of how many overlooked animals, and even plants, there are in Kruger. It truly is a biologist’s and a photographer’s paradise, and the following are a few examples.

Rollers are a family found only in the Old World. They are called rollers because during the mating season pairs fly up high and then rock back and forth as they descend loudly, and raucously, calling. They are easy birds to see as they spend the majority of their time perching attentively watching for insect prey. Maybe that’s why they are so common on bushes near roads. We’ve watched them swoop down to grab a grasshopper killed by a passing car, so maybe they are purposefully taking advantage of traffic. 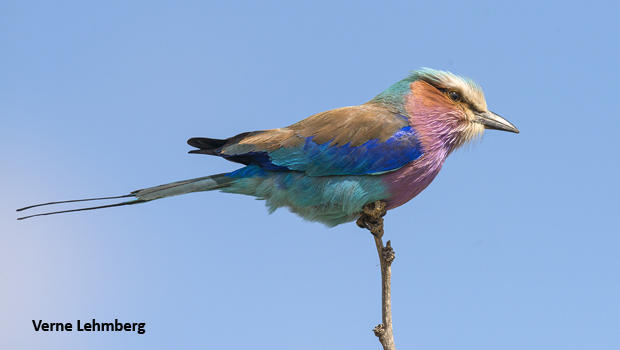 Bushshrikes are similar to shrikes – predatory birds that lack the necessary equipment to be effective avian predators, such as large talons and a heavy, sharp bill. They usually make up for their lack of equipment by impaling their prey on thorns or barb-wire.

This one had caught a lizard but instead of impaling it on a thorn, the shrike wedged it between two small tree branches, so the head was on one side and the rest of the lizard’s body was on the other. The shrike methodically tore the lizard’s body apart and ate it while the head remained wedged in place. 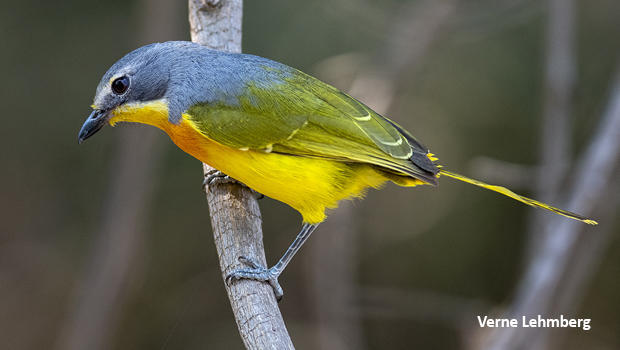 Chameleons are super well-adapted for living in trees and eating insects. Their eyes can move independently of each other; their feet are well designed for holding tree branches; and their tongue, which is attached in the front of their mouth, can reach way out to grab insects quickly. 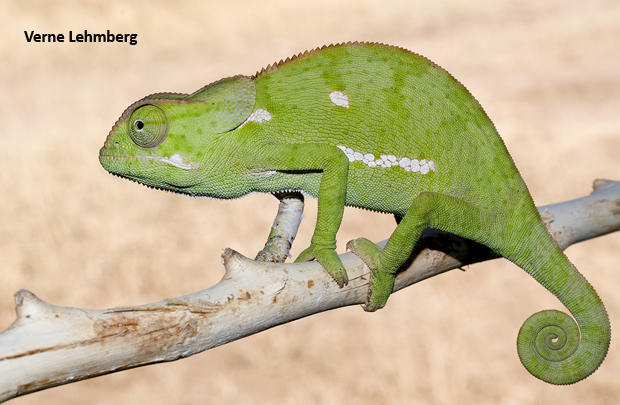 African folklore says God got mad at baobab trees, pulled them out of the ground and put them back in upside-down. Baobabs are my favorite tree. They provide food and habitat for many African species. 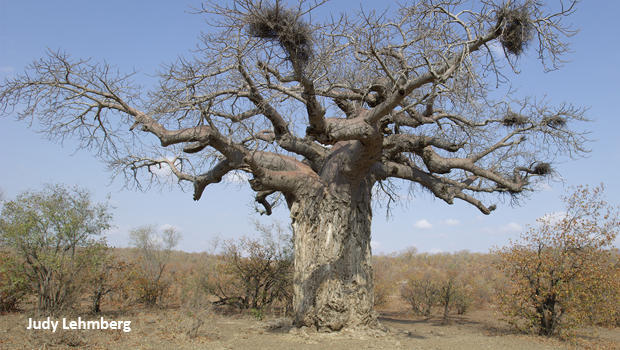